The increasing push for naloxone kits hits UGDSB school board

Wellington County has more opioid overdose cases than the province's average
Jun 26, 2019 8:30 AM By: Anam Khan 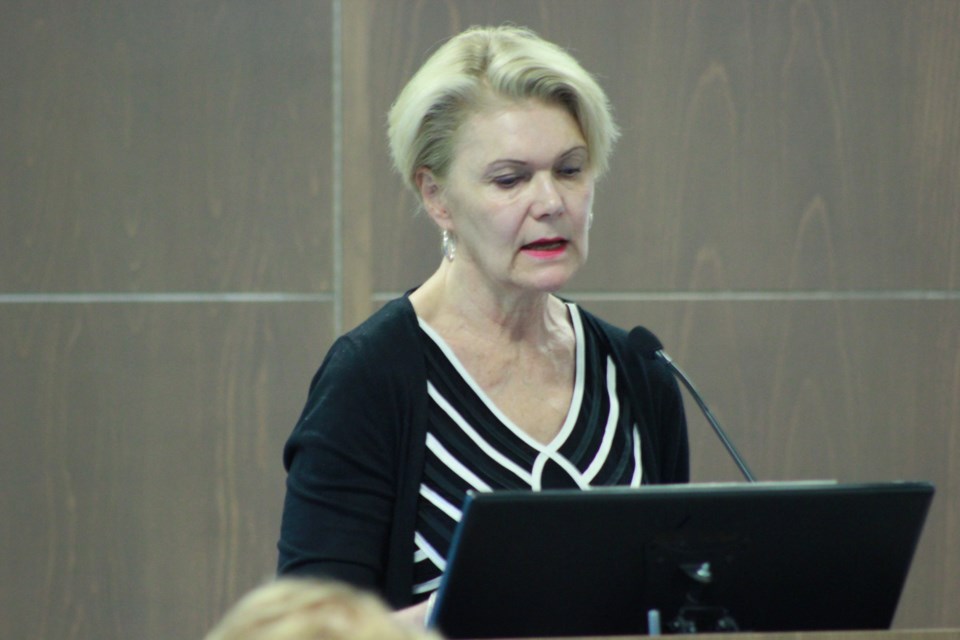 Manager of Wellington Guelph Drug Strategy Adrienne Crowder speaks about the importance of carrying naloxone kits in all UGDSB schools at the board meeting on June 25. Anam Khan/GuelphToday

Those on the front lines of the opioid crisis are calling for naloxone kits to be available in local schools to treat people who overdose.

Delegates at Tuesday's Upper Grand District School Board meeting spoke about the benefits of the kit, the increasing need for these potential life-saving kits and any misconceptions about pricing and availability.

"One of the reasons we're here tonight is to invite the schools to be prepared should a student experience an overdose," said manager of Wellington Guelph Drug Strategy Adrienne Crowder.

"But we also know if students are using non-prescription opioids recreationally, that we also know that staff, custodians, administrators, contractors, random people in the school grounds are also possibly having an experience where they are having an opioid addiction.”

She said over 11,500 people have died from an opioid crisis in Canada over the last three years and in Wellington County, the local statistics suggest that it is almost double the provincial average.

“The risk of something happening is really considerably high.”

To put things in perspective, Crowder presented the findings of the 2018 Wellington-Dufferin-Guelph Youth Survey, a local survey that gathers self-reported information from Grade 7 and Grade 10 students about their health.

“The 2018 survey came back with some results that someone working in the Drug Strategy I find very disturbing,” said Crowder.

She said 17 per cent of Grade 7 student had used non-prescription opioids in the last 12 months.

While misconceptions about the usage of naloxone kits exist, Guelph pharmacist Lisa MacEachern said taking naloxone has no downside.

“If you use this on someone who has not used an opiate, it will not do anything to them. It is inert. It won't hurt them and it won't help them. The downside to using this is nothing, the upside is that you can save a life,” said MacEachern.

She said taking the drug allows the person experiencing an overdose to begin breathing and buys some time for an ambulance to come.

Because naloxone has a very short half-life, it goes away from the brain receptor within a short time and allows the opioid to float around waiting to come back resulting in the person going back into an overdose.

“It's not a cure. It's merely a bandaid until an ambulance can get there but it will save a life. It's a simple nasal spray, you peel it open, you put it in a person's nose and you squirt it, hopefully, they come through. If they don't, you use the second one. This is all done after you call 911,” said MacEachern.

Crowder said partner organizations of the Wellington Guelph Drug Strategy such as ARCH, Wellington-Dufferin-Guelph Public Health and Sanguen Health Centre are interested in partnering with the school board to train staff and provide kits to the school board that would be at zero cost. However, she says using a naloxone kit does not require any prior training. Anyone can use it.

Crowder said Public Health Canada offers naloxone kits for free for any person who walks into their clinic, but the kits cost $120 and the process to distribute them to an organization as large as UGDSB is different.

“There's no downside to having naloxone but there's a very large downside to someone dying from an opioid overdose,” said Crowder.

“We have the opportunity to prevent this. We have the means to do it.”

Medical assistant at the ACT Guelph methadone clinic, Hannah Derue said gone are the days where students experiments with psychedelics like LSD and mushrooms.

“We have AED defibrillators, epi pens, first-aid kits and other precautions in every UGDSB school. Although we would always hope that we don't have to use these life-saving measures, It's time to see naloxone as a natural extension of the usual precautions that we take to ensure the safety of our students, educators and visitors,” said Derue.

“I'm here to tell you that it is your moral and legal obligation to act now before it's too late.”

Ian Digby, Chief of Emergency Medicine Ian Digby at Guelph General Hospital, speaking as a citizen, at the board meeting, addressed the concern that some individuals might have about causing harm to a person by potentially administering naloxone in a rare case where someone is allergic to the drug.

“And we have the opportunity now, other school boards are going this route for prevention of what may seem like a possible low-risk event.”

City councillor James Gordon attended the meeting as a citizen and explained the need to understand the reality of the opioid crisis in the community.

“Why would it be inappropriate to offer this safeguard now? The crisis is expanding in two ways. There are more users and the drugs they are using- as we have heard- are of lower quality with deadlier ingredients over time,” said Gordon.

“It's unrealistic to expect that high schools would be immune to this. In fact, it's the opposite.”

Trustees at the board approved a motion instructing staff to develop a drug and alcohol overdose protocol and suggested that staff incorporate a recommendation on the implementation of naloxone kits in school in the protocol and report to the board before December 2019.