“The women’s movement is unfinished everywhere” 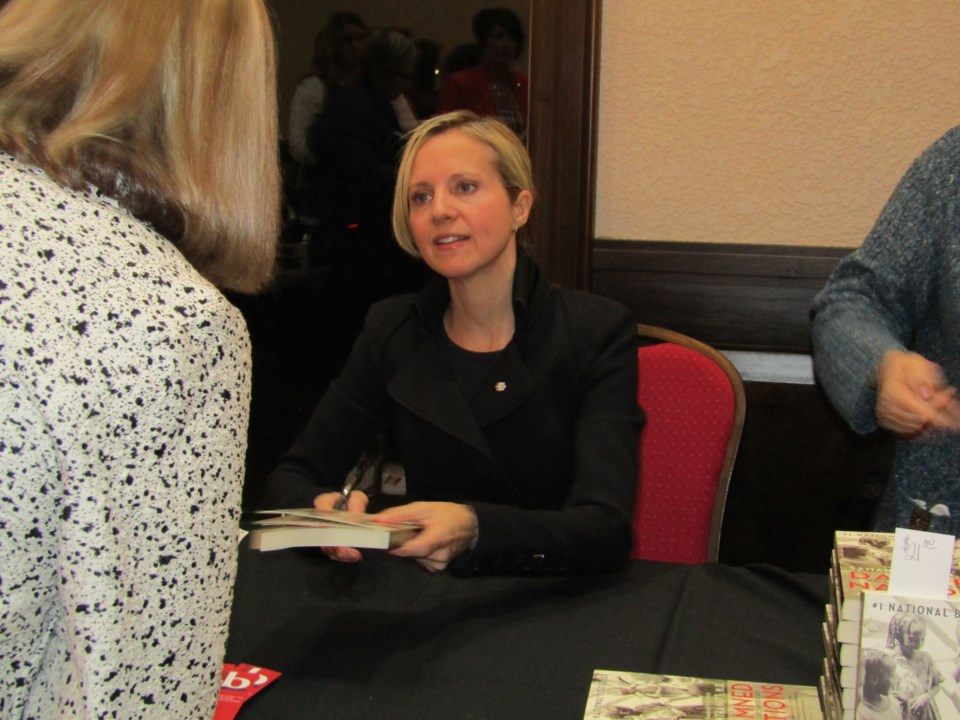 Dr. Samantha Nutt, director of War Child Canada, spoke in Guelph on International Women's Day about women and leadership. She also signed copies of her book "Damned Nations." The event was presented by Innovation Guelph and the Rhyze Project. Photo by Joanne Shuttleworth for GuelphToday.

Samantha Nutt’s public speaking engagements are usually serious affairs as she describes the effect war has on children.

As founding director of War Child Canada and War Child U.S.A., she has seen first-hand how witnessing war causes trauma for life and being groomed to be a soldier as a child forms traits that are hard to shake as an adult.

But on International Women’s Day, as keynote speaker at a dinner organized by Innovation Guelph and the Rhyze Project, Nutt broke out her inner comedian as she talked about women and leadership and why investing in women is critical.

“Women still worry about looking stupid,” she said, explaining a common reason women don’t speak up in business settings. “Men do stupid things all the time and never worry about it.”

Her speech was not about knocking men however. She talked a lot about her own life and the comments and criticisms that can still cause moments of self-doubt, despite her many accomplishments.

Nutt is also a medical doctor, author of the book Damned Nations and was awarded the Order of Ontario and the Order of Canada for her humanitarian work.

“The grade school taunts stick,” she said. “That is the front line in the gender divide.”

She offered some advice to women as they aspire and gain leadership roles, “a bag of tricks that will see you through the difficult moments,” she said.

First, ignore the blowhards, she said. There will always be nay-sayers and people who question your authority.

“Just because they speak with authority doesn’t mean they have any. It’s too easy to derail our ideas. But leadership is a test of endurance,” she said.

‘Write your why’ was her second piece of advice, meaning be clear about why you are passionate about the work you do. That makes it easier to stick to your vision and answer the doubters.

By way of example, Nutt said she lived in South Africa as a child and her best friend was a black girl who wasn’t allowed to play in the same playground as Nutt because she was black.

That abrupt face-to-face with injustice had a profound impact, she said, and shaped the rest of her life.

And as she travelled around the world as an adult, she saw more injustice and realized the biggest victims of war are women and children. She started War Child Canada to address the gap between emergency relief and sustainable programs that lead to independence and autonomy. Now her organization helps half-a-million families a year, she said.

Her third point: “Feminism is a process, not a history lesson,” she said. It takes time – sometimes a generation – to change prevailing attitudes.

“My work with women around the world has taught me that the women’s movement is unfinished everywhere,” she said. “Rights are not entrenched. This is why leadership matters.”

Given that backdrop, Kristel Manes, director of Innovation Guelph, announced another new program of the multi-tentacled Rhyze Project, Rhyze on the Road. This program will reach out to youth through the neighbourhood groups in Guelph and Wellington County with a program to teach leadership and entrepreneurial skills to girls.

Through its research Innovation Guelph knows that a barrier to women opening their own businesses is a lack of confidence and belief in themselves, The Rhyze Academy, which started in September, offers instruction and exercises to women entrepreneurs to strengthen the so-called soft skills and lead to greater success in business.

Rhyze on the Road is aimed at girls aged 11 to 17 and strives to bolster their entrepreneurial skills and develop the next wave of women entrepreneurs.

The official launch of Rhyze on the Road will take place in the spring and the program is to start this summer.