Residential program manager at Marianne’s Place says the effects of a therapy dog is on a whole other level
0
Jan 14, 2020 7:00 AM By: Anam Khan 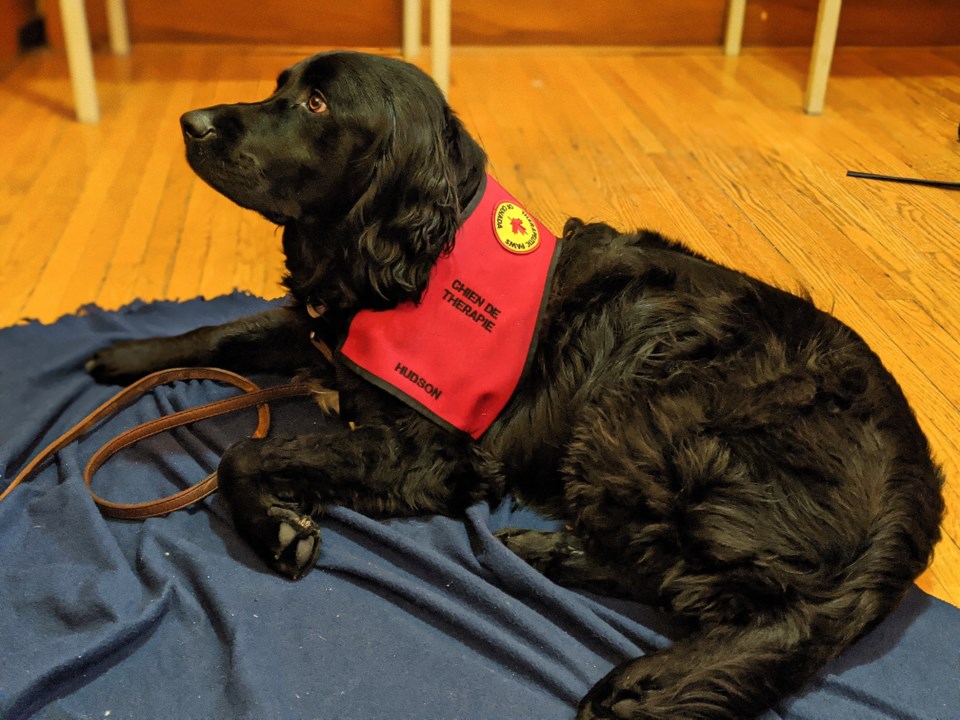 The newest member of Guelph-Wellington Women in Crisis is a mix of German shepherd and springer spaniel, has black fur, goes by the name Hudson and is remarkably loving.

The therapy dog began working at Marianne’s Place in late December 2019 as part of Therapeutic Paws of Canada's (TPOC) program, a non-profit organization that provides animal resources for people who need them.

“They bring a calming sense to situations,” says Christine Wilson, the residential program manager at Marianne’s Place about therapy animals.

Wilson says although people can provide comfort through their expertise, conversations and presence, it is not the same as a calming effect a therapy dog delivers.

“He’s really not assuming and so it’s easy for people to approach him.”

Hudson’s handler, Carly Stephens says the dog’s role at the shelter is to provide mental breaks and excitement to people of all ages.

“The kids are always running through the hall to come to see him,” says Stephens.

TPOC  partners with communities across Canada and makes 40,000 visits across the country. The organization has 12 dog teams in Guelph.

The pets chosen are family pets which are carefully screened and evaluated.

“I got Hudson when he was nine weeks old. He has loved people more than dogs since we got him. He’s quiet, really calm, easy to train,” says Stephens.

Prior to working at Marianne’s Place, two-year-old Hudson went through a thorough behavioural assessment and passed his child certification.

He also visits the University of Guelph bi-weekly to relieve stress in students who may be feeling down because they are away from home or may be feeling pressure from exams.

Stephens says although he has never been tasked trained like a service dog, Hudson is able to tell who needs comfort during times of anxiety.

“He will just kind of hang out with them first. He doesn’t move much but I always know there is someone who either needs it or someone he’s happy to see, but he will go straight to them,” says Stephens.

“I think they all have that sense that someone is feeling more stressed than other people in the room and so they tend to move towards that person. It’s just really innate in the dog. It’s not anything we’ve trained the dog to do,” says Diane Myers, team leader for TPOC in Guelph.

Wilson says overall, everyone in the shelter gets really excited when they know Hudson is coming.

“Everyone scrambles together,” says Wilson.

“It’s just a different way of interacting. It’s a different experience they’re able to have.”