'We aren't mental health workers, but are the ones called to deal with mental health crisis': Police Chief Gord Cobey
Jun 29, 2020 9:30 AM By: Tony Saxon 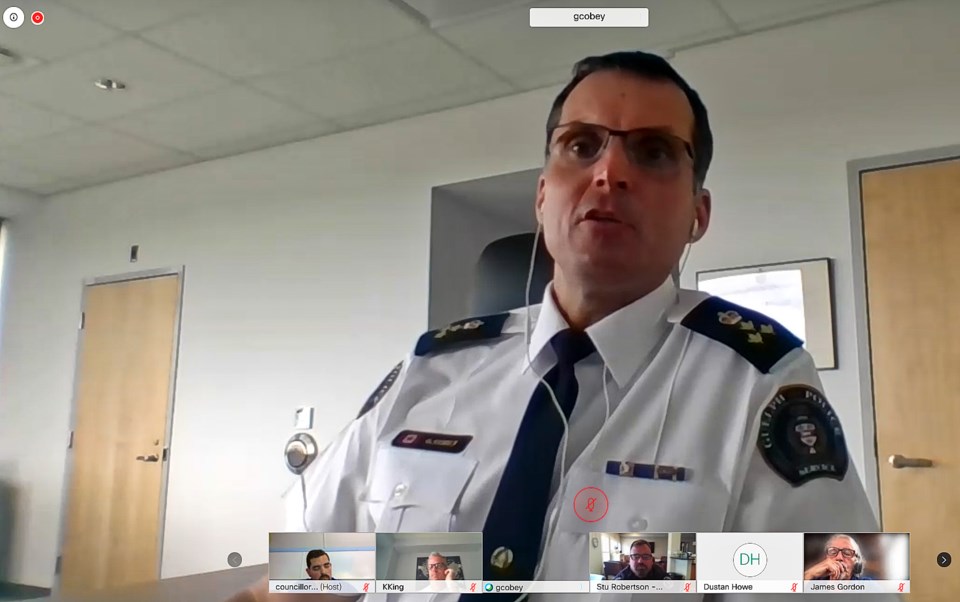 Police are not social workers or mental health workers, but they are the first point of contact in many crisis situations involving those two areas.

That was one of the messages delivered and explained by Guelph Police Chief Gord Cobey at a virtual Ward 2 town hall Saturday.

After some introductory remarks and some previously submitted concerns, much of the conversation turned to policing in relation to mental health calls and how they are ill-equipped to properly deal with many of those.

The police chief was the first to admit police are not mental health workers.

“I don’t think you are going to meet a police officer anywhere who says police are mental health workers, nor are we social workers,” Cobey said.

“But there is no doubt that often we become involved when someone is in crisis, and we are the 24/7, 365 service to help a person when they’re in crisis.”

He said police are there to navigate that crisis moment. Guelph police get roughly 20 mental health calls a day.

Police have insufficient training and, in many of the commenters opinion, shouldn’t be the ones dealing with mental health situations.

“I don’t think you’re ever going to find a police officer who says we are the first choice mental health providers, we are simply the ones who respond in times of crisis, when we get a call and they need that crisis resolved.”

Police have five mental health workers embedded in the service through the Integrated Mobile Police and Crisis Team (IMPACT) team, but they aren’t always available and aren’t always going to attend crisis calls.

“We acknowledge that we are not primary caregivers. It’s ‘how do we deal with that crisis situation so someone can get the care that they need.’”

Staff Sgt. Kevin King said when IMPACT workers are available, it is encouraged that they go to mental health calls.

“We (police) are trained to deal with the crisis at the moment, that’s all we can do,” King said.

“To just simply say that we can have our IMPACT workers go and deal with these calls without police just isn’t realistic. It just won’t happen” for safety reasons, King said.

As for racial, cultural and marginalized group sensitivity training, Cobey said Guelph police is “absolutely open” to new training and “very open to learning more about how we can do better.”

King said Guelph Police has a committee set up to make contact with various minority and marginalized groups in the city to learn how they can do better.

“We want to develop those partnerships,” King said.

After some opening remarks by Cobey, some pre-submitted questions dealing primarily with long-standing concerns were dealt with, primarily crime in the ward.

Cobey offered statistics that showed Ward 2 break and enters were down 45 per cent in 2019 over the previous years and vehicle theft was down 27 per cent. Vehicle entries were roughly the same.

Crime in Ward 2 “has started to trend down for the first time in a bit,” Cobey said.

Cobey was joined on the call by three other police supervisors with experience in specific areas. King, Det. Cst. Stu Robertson and Sgt. Dustan Howe.

Cobey pointed out that since the start of the pandemic, March 12 to be precise, police have received 21,000 calls for service. Police are tracking certain types of crime to identify trends.

Call volume is back to normal, he added.

“Certainly within the first couple of weeks we had a bit of a decline, but now we’ve pretty much returned to normal,” Cobey said.

Wellington County green bin collection to begin next week
Jul 3, 2020 12:00 PM
Comments
We welcome your feedback and encourage you to share your thoughts. We ask that you be respectful of others and their points of view, refrain from personal attacks and stay on topic. To learn about our commenting policies and how we moderate, please read our Community Guidelines.