U of G podcast makes a splash with its fish tales 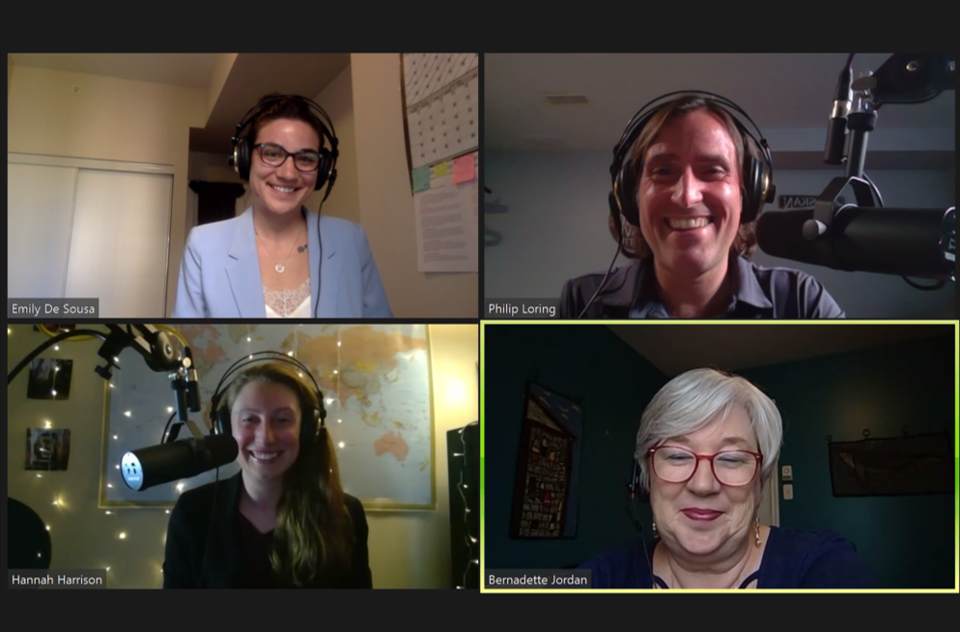 Scientists aren’t always great at sharing their findings with the general public, especially when it comes to complicated issues, acknowledges Philip Loring, associate professor in the University of Guelph’s department of geography, environment and geometrics.

That, he explained, is why he’s so proud of Social FISHtancing, a 22-episode podcast which delves into issues surrounding the impact of the pandemic on small-scale seafood fisheries and the system in general, which has been nominated for a Canadian Podcast Award as well as named as a finalist in the Social Sciences and Humanities Research Council (SSHRC) Impact awards.

“To have it recognized in this way … it’s cool because maybe we and others are moving the needle a little bit on the importance of communicating science in an easily digestible way to a wide audience,” Loring said. “That’s encouraging to me.”

The podcast launched soon after the pandemic struck, when Loring and his podcast partners – Hannah Harrison, a postdoctoral scholar, and masters student Emily De Sousa – started to hear stories of how small-scale fisheries were adapting in the face of not being able to travel and sell their catches globally.

“We realized that COVID had really dramatically impacted supply food chains … and in some places really collapsed the existing systems,” Harrison said, noting family operations that directly market their seafood saw a large jump in demand.

“Especially in Canada, we often have this idea that seafood is something you find at the grocery store … but seafood is one of the last wild things that people eat.

“Small-scale producers are some of the most sustainable producers of seafood. They tend to know their product and know their seasons, they tend to be very passionate conservationists because they have a relationship with that species and the environment it comes from.”

The team had received funding a couple years prior for a project known as Coastal Routes, a platform and research network designed to share stories of coastal resilience and innovation from around the world, which included a podcast element, but they didn’t want to do a podcast just for the sake of doing one.

“We wanted it to have purpose, to have drive and to tell an important series of stories, so we thought, ‘Let’s wait until the right topic comes along,’” Harrison said. “Because of the stories that were starting to emerge, we said, ‘This is what the podcast should be about.’”

“We realized we had to cover it,” added Loring.

The podcasts have garnered about 7,000 listens collectively.

Social FISHtancing was recently announced as a finalist in the Canadian Podcast Awards news and current affairs category. Winners are selected based votes from fellow podcasters; voting runs through May 29.

The podcast is also a nominee in the “connection” category for a SSHRC Impact award. The winner, to be announced this fall, will receive a $50,000 prize.

“We thought this was going to be a fun, little side project and it’s turned into something way bigger now that’s been so impactful,” said De Sousa. “It’s been really cool to see how far and wide it’s reached.”

In light of the podcast’s success, the trio is planning to expand on fisheries issues through a new podcast to be known as By and Large. Work on it begins this summer.

Contact us and ask about our specialty services today!
Moving your Business while Keeping up Productivity