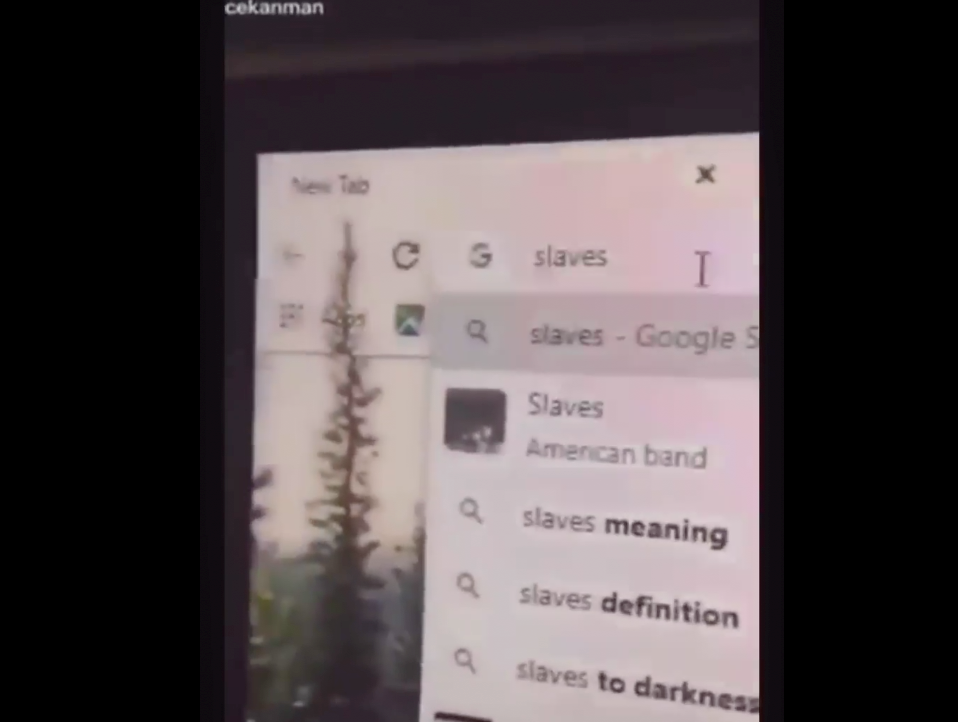 A screenshot from the student's TikTok video posted on the weekend. Supplied photo

The racist video has also been removed from the Overheard at Guelph Facebook page.

Racist videos from a University of Guelph student posted on the popular social media site TikTok on the weekend has sparked outrage among students and concern by the school.

In the 24 hours since the student posted the two videos, numerous students alerted the U of G's Office of Diversity and Inclusion, with the university issuing a statement that declared its intolerance towards any expression of hatred and its solidarity with black students.

In one of the TikTok videos, a caption reads ‘Me teaching the black kid how to read in the 2nd grade,’ and the student is seen performing a skit where he says ‘you saved me. Why?’ to which he himself responds ‘monkey.’

In the second video, the student is seen searching the word ‘slave’ on google and then hovering over the 'shopping' option on the website.

The student’s TikTok account has since been deleted and the videos garnered over 3,000 views when they were was last seen Monday afternoon.

In an interview with GuelphToday, U of G student Nanci Dos Santos — who shared the video on Facebook — said no one can look at the student’s content and say that it is not hurtful.

“It expresses hate and racism. I would be a part of the problem if I let this go,” said Dos Santos.

She said if the university listens to the students’ pleas to let the student go, it will be a step in the right direction towards equality and justice on campus.

“The University of Guelph has been made aware of a racist social media post by a student. We are a university community committed to mutual respect and anti-racism. We will not tolerate any expressions of hatred. We are taking steps to address this troubling situation that we know is hurtful to many members of our community," read a statement issued by the university on Sunday.

“We stand in solidarity with black students, faculty and staff at the U of G against racism and violence during this troubling time and always. We offer support to anyone feeling vulnerable or at risk. We are here as allies to the black community and will do our part to ensure respect, safety and dignity on our campuses.”

U of G administration declined further comment when contacted.

The University of Guelph Student Life and Student Experience Group also issued a statement saying it recognizes that the videos have impacted Black students on campus and a cultural diversity advisor is available for support.

Several attempts to reach the student who posted the offensive material were unsuccessful.

Students expressed anger at the posts on the popular student Facebook group, Overheard at Guelph:

RACISM IS NOT A TREND. PERIOD.

aint nobody posting this for likes. I'm posting this so people will pressure the school to act. acknowledge your privilege to ignore these issues and go.

Nyokani Natana
Brennan Georges this video isn't just plainly offensive or a "mistake" he made on tik tok. what this video really means to people like me is that the next time i have to go to class, i do have to worry if the person sitting next to me may just think that i'm nothing more than a monkey or i deserve to be sold into slavery. and that pain runs deeper than you could ever even care to imagine. so yes, exposing him is necessary so that we can recognize who really feels what and just maybe he can start realizing the effects of his action

As a Guelph prof, as a mother of 2 half black (very smart) sons, as a Canadian, as a concerned citizen for racial equality—I am appalled at this young man’s post. I have forwarded this post to the interim president’s office. Contact Dr Charlotte Yates if you want to add your voice. BLM