U of G wants to do more for student mental health 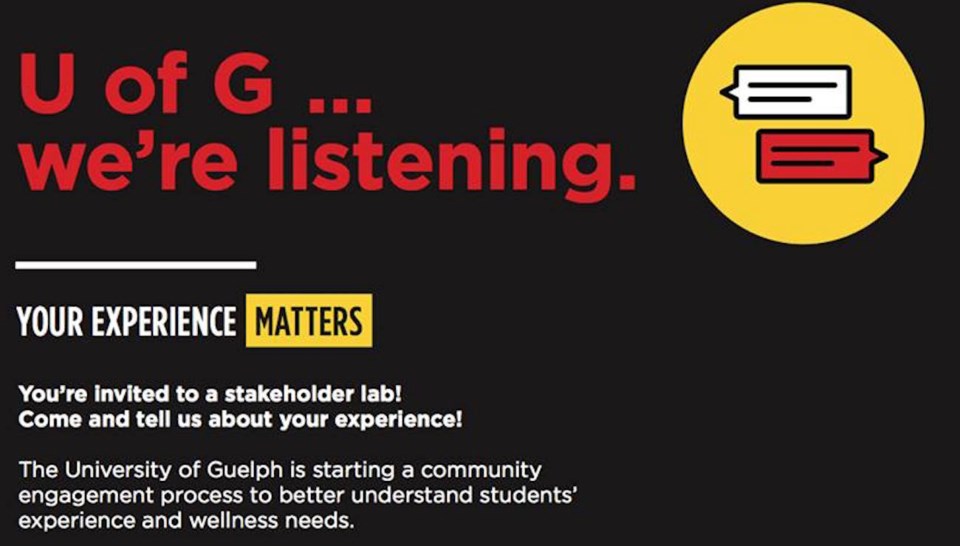 Coming up next week on campus.

The current academic year has been a very difficult one for the University of Guelph, a university official said Friday.

Brenda Whiteside, the school’s associate vice-president (student affairs), said the close-knit campus community has been in a state of grief at various times throughout the year. There have been six deaths of U of G students, four of those by suicide.

U of G has a number of mental health supports for students, with services having been enhanced in recent times to address growing mental health challenges amount students. But it wants to do more, and do better.

Now, in conjunction with Overlap, a human-centered design firm, the university has begun a community engagement process to better understand the struggles students have and what their wellness needs are.

On Monday, March 6, campus will host Stakeholder Lab, a series of interactive, small group sessions in which a series of strategic and facilitated exercises will be conducted to gain insight into the students’ experience. Overlap will also conduct walking surveys on campus.

“What they’re doing next week is trying to get a sense from students what the issues might be around mental health,” Whiteside said. “The complaints they might have, what’s working well, what’s not working well, and where do they see things needing to go.”

The insights gathered will then be the basis for a March 14 town hall on campus, where students will be heard and ideas shared about how to improve campus life for the betterment of mental health, and what actions need to be taken in that direction.

“It’s an attempt to give students an opportunity to say, these are the things we think you need to hear,” Whiteside added. “It’s an opportunity to really engage the student community around what’s working, and to get some ideas from them on what might work better.”

Whiteside said she did not want to conduct the engagement process using the university’s own team. She felt an impartial third party like Overlap, recommended by the Canadian Mental Health Association, would be better suited to the task.

Issues raised in the town hall meeting, she said, would be worked into an implementation plan for the academic year 2017-18.

“The whole community was grieving over the deaths of students, and there was a lot of anxiety,” Whiteside said, adding that campus flags have been flown at half-mast a number of times in the year.

‘It’s be a struggle,” she said. “We’re a pretty tight community, and when you lose someone in your community it is always hard. When you lose so many you get this sense of, what’s next? A sense of unease.”

She added that with any death, particularly the death of a young person, there is no way of knowing what impact it will have on others.

“We just had to really be here as a community to say, whoever is struggling, come out and let’s help you.”