Supporters of Esther The Wonder Pig upset after the OAC advertised their annual pig roast with an image of a pig on a stick
0
Jun 27, 2019 12:44 PM By: Anam Khan 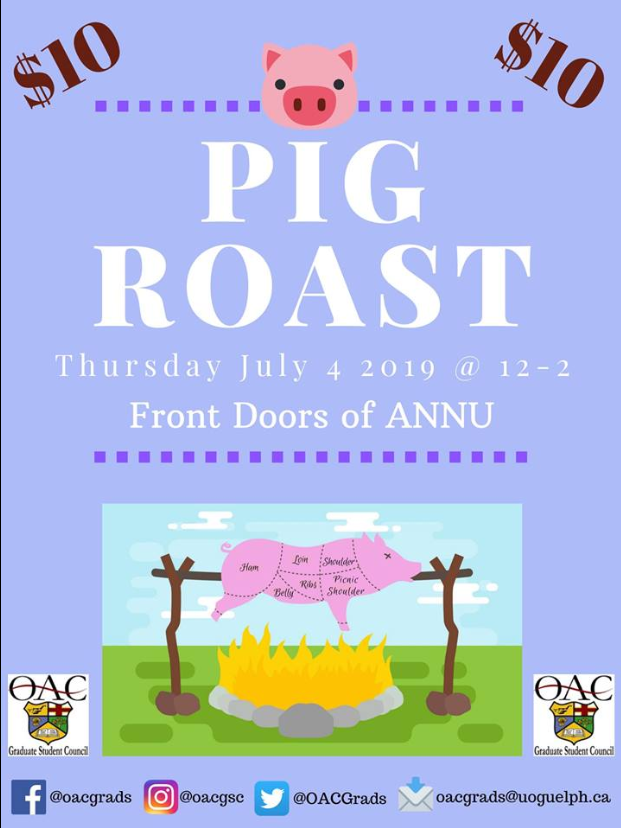 A poster for the pig roast event at the OAC's Graduate Student Council's Facebook page.

The University of Guelph's Ontario Agriculture College says a misleading image on a poster is to blame for a social media campaign protesting its annual pig roast.

Recently, supporters of the Esther The Wonder Pig and the Happily Ever Esther Farm Sanctuary were in a fury after the OAC announced the annual year-end event on July 4.

A petition to cancel the pig roast organized by the OAC's Student Graduate Council had over 4,500 signatures in less than 48 hours.

The image portrayed in a promotional poster for the event depicts a cartoon pig on a stick on top of a lighted fire pit.

OAC communications manager Stephanie Craig said the event is not actually a pig roast and that the poster was a poor choice of imagery.

She said the office of the president of the university and the dean of the OAC  are aware of the problem and in response have responded to unhappy social media comments clarifying the intention of the event.

“Although it says pig roast, there's actually not going to be a pig being roasted, just to clarify,” said Craig. “Essentially what it is, is it's a barbecue. And there will be pork and vegetarian options.”

Petition creator Darlene Levecque said she created it knowing supporters of the Happily Ever Esther Farm Sanctuary would be extremely upset after the fact Esther the Wonder Pig helped raised $650,000 from supporters around the world for the Ontario Veterinary College to purchase a large CT scanner- a first of its kind in Canada after Esther The Wonder Pig was treated at the OVC.

“It just seems disrespectful to be doing that. And also the fact that Esther is there right now, and has been there for almost a month with various ailments, and is under the care of the veterinary hospital at the university as well,” said Levecque

“They were really affected by the fact that the University of Guelph allowed the pig roast to take place, especially in light of the donation and fundraising that they had done,” said Levecque.

Esther The Wonder Pig's owners did not immediately respond for comment.

After Levecque was informed of the miscommunication, she requested that the imagery for the event be changed and the student grad council of the OAC agreed.

“They're actually going to update the imagery of the poster because they have realized that it's a very confusing image or misleading image. So they are actually working on that right now,” said Craig.

Women of Distinction event announces 16 to be honoured
Feb 26, 2020 11:54 AM
Comments
We welcome your feedback and encourage you to share your thoughts on this story. We ask that you be respectful of others and their points of view, refrain from personal attacks and stay on topic. To learn about our commenting policies and how we moderate, please read our Community Guidelines.