Up and Running is good for mental health 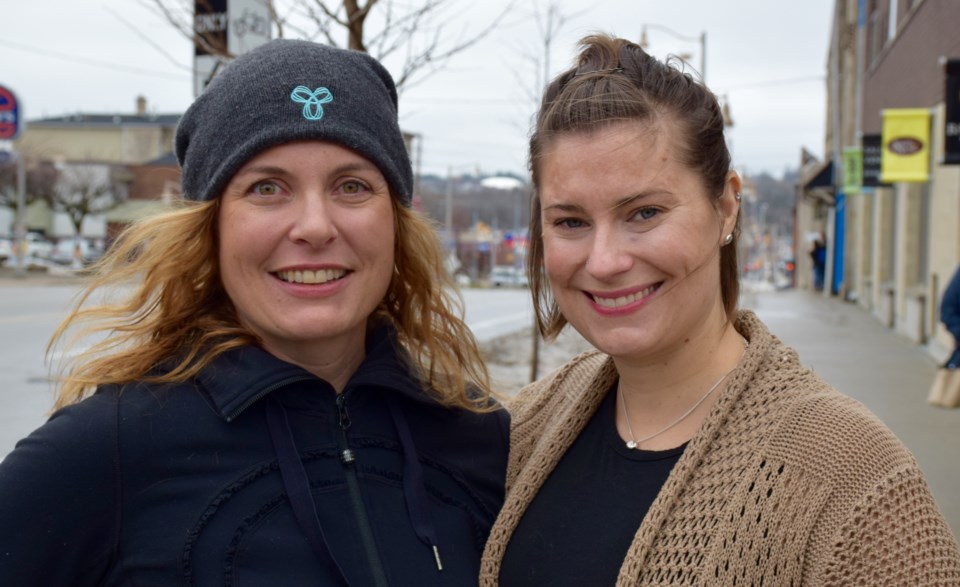 Kelly Legge, left, and Katie Junkin are lead coaches of Up and Running Guelph. Rob O'Flanagan/GuelphToday

Running – or jogging at a very leisurely pace – is simply good for you.

The physical activity, especially when done outdoors with a group of like-minded people, has a very beneficial effect on mental health, say Kelly Legge and Katie Junkin, the lead coaches of Up and Running Guelph, a program for women experiencing mental health challenges.

The organization, which has grown rapidly since starting up last fall, encourages running as one tool in the mental health toolbox. They say it is helping a growing number of women.

The program is expanding, could soon include a group for males, and is in the process of being incorporated as a not-for-profit. The current session started this month, and is full up.

Legge and Junkin said there has been a great deal of research showing that outdoor physical activity has a positive benefit on mental health. Up and Running builds a community of support among a small group of women, and gets them outside and moving.

“Essentially how it works is, it’s a 10-week program with daytime and evening sessions, and runs twice a week,” Legge explained. “It’s not about how fast or how far these women are going with their runs, it’s just about getting moving, knowing you’re not alone, and building up a network of friends.”

All women are invited to take part, whether they have a running history or not, Junkin said. The program starts out slow, even at a walking pace if necessary, and gradually progresses.

The program is geared to women who have experienced anxiety, depression and other mild to moderate mental health challenges. Legge stressed that the group is not officially therapeutic, but rather is there to offer support, and to help the women feel better.

There were 12 women registered in the first session, which began in the fall and ended in December.

“We have expanded now to offer two different sessions,” Junkin said. “We are opening it up to more women.”

There are now about 25 women taking part, and there is a waiting list for the spring session.

“That shows us that the group is needed and wanted in our community,” Junkin added.

“One of the participants said to us, ‘You have no idea that lives you are changing or the impact you’re having on people,’” Legge said. “Another said, ‘I now think of myself as a runner, after thinking I couldn’t even move.’ There is a true sense of accomplishment.”

Junkin said there is a consensus among the participants that they feel better and more supported as a result of their participation in the group.

She said depression and anxiety result from a lack of dopamine and serotonin in the brain. Exercise is a natural stimulate of those neurotransmitters.

“After exercising you get a natural boost,” Junkin added. “There is also a lot of research that shows that green exercise, getting outside while exercising, has the added benefit often of getting your out in the sunshine.”

The runners meet at Running Works on Gordon Street. Often there is a short presentation on the subject of physical activity and mental health. There is a warm-up outside, and then a 30- to 40-minute run.

Visit www.upandrunningguelph.ca to learn more about the group.