In total, 600 elementary students are involved in the flag football program in Guelph
0
Oct 7, 2019 11:00 AM By: Kenneth Armstrong 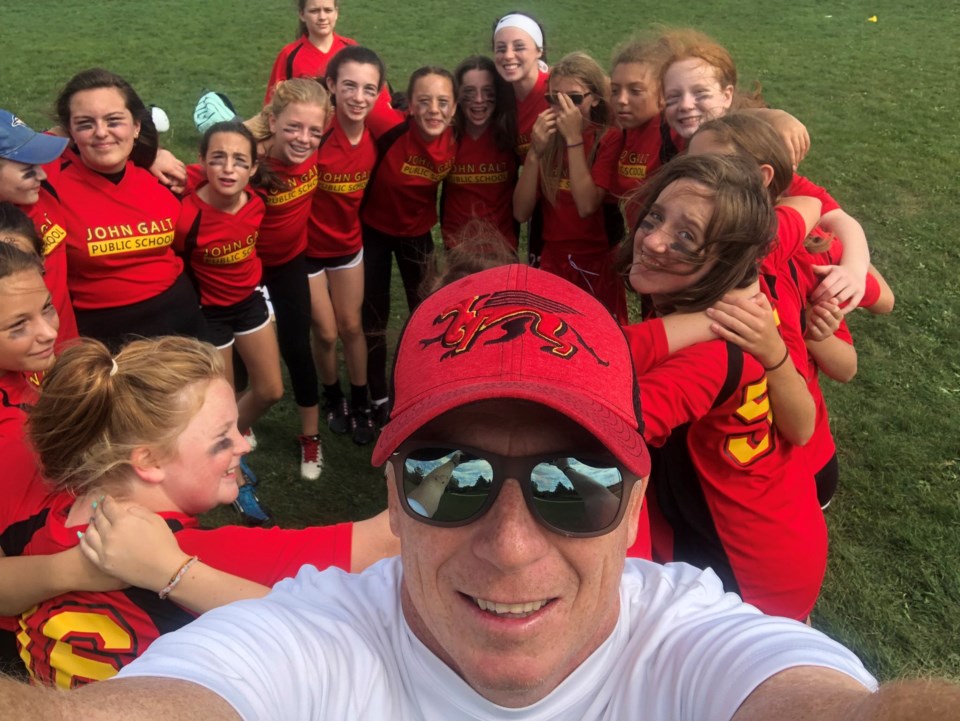 Teacher Bill Brown poses with the John Galt Public School girls football team in a message sent to the CFL. The league is giving away free football equipment to schools and organizations across Canada as part of its #tryfootball campaign. Submitted photo

A Guelph elementary teacher says he is thrilled to receive a shipment of free football equipment for the girls football team as part of an initiative by the Canadian Football League.

Earlier this year the CFL launched a social media campaign called #TryFootball in an effort to encourage Canadian youth to try the sport. Through the campaign, the CFL hopes to distribute 11,500 free footballs.

Bill Brown is a math and phys ed teacher and football coach at John Galt Public School on the city's east side. He heard about the campaign and reached out to request some equipment for the girls football team.

When Brown recently saw that the CFL was supporting local football initiatives, he sent out a tweet about the school’s girls football team and its need for new equipment.

“I told them the scenario and within minutes they got back to me,” said Brown. “It was great that the community out there was listening."

As promised, a box full of football supplies arrived at the school late last week.

“They have been great,” said Brown of the CFL and its initiative.

Brown runs the touch football program out of John Galt with little more than a few old footballs, but he said the kids get a lot out of it.

At first, the drills and plays don’t make much sense to the students, but as the lessons go on they gain more confidence and buy in to them, he said. For a lot of the kids, it’s their first time playing the game.

“They are learning new concepts and schemes,” said Brown. “Some are learning to throw and catch a football for the first time.”

In total, 600 elementary students are involved in the flag football program, which is played on 21 fields across Guelph.

“It’s alive in the city,” said Brown. “There is quite a lot of interest.”

He said having the equipment in the schools is key.

“I think it’s great that the CFL is trying to get kids interested.”

In his 18 years as a teacher, Brown has seen many students go on to play football in high school, college and a few have even gone on to professional careers.

Brown is also a member of the coaching staff of the Guelph Gryphons and says he often brings the university players to elementary school to inspire the younger players.

He said a lot of the best lessons the kids learn often come from off the field and this CFL initiative is another example of that.

“For our kids it’s a good lesson in how social media can be used for good,” said Brown.

We heard the @johngaltps girls 🏈 team is running out of footballs.

So, Commissioner @RandyAmbrosie is sending the team a big box of flag football equipment! ✊ #TryFootball pic.twitter.com/R41G6vKnA2