The Redmonds were thrilled to have their name on a seat in the new facility when it opens in September
0
May 8, 2016 3:01 PM By: Tony Saxon 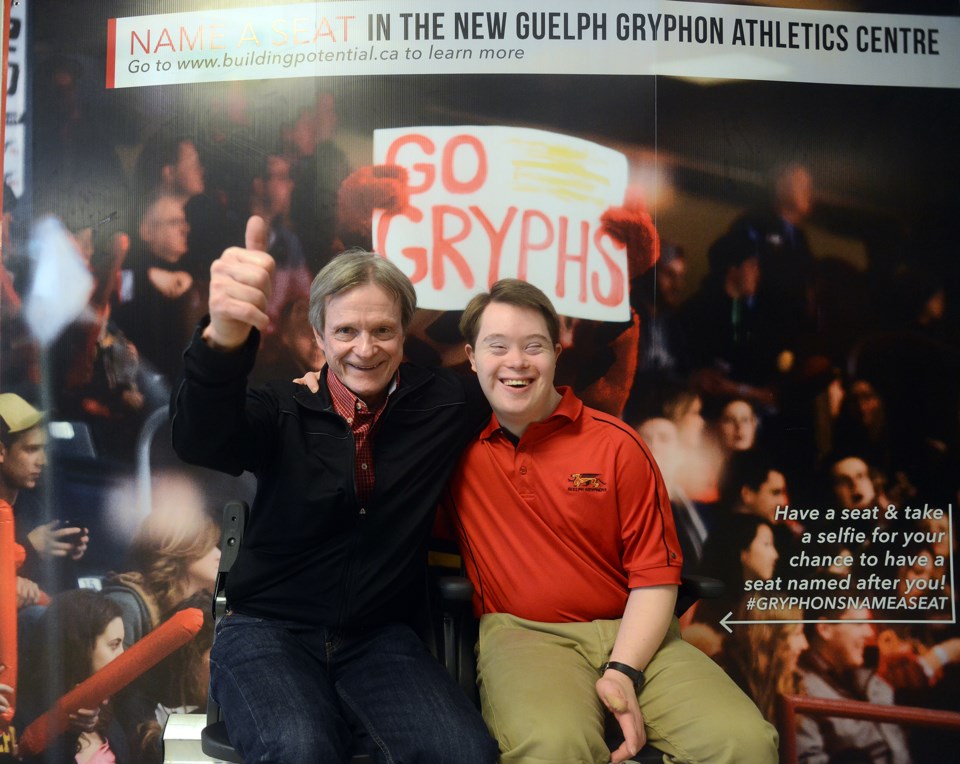 Father and son team, and Guelph Gryphon superfans, Steve and Taylor Redmond were the first to sign up for the Name A Seat fundraising drive for the new Gryphon athletics centre. Tony Saxon/GuelphToday

So when the opportunity presented itself for them to be part of the new Gryphon Athletics Centre that is currently being built on camps, they jumped at the chance.

"It's a great way to support the teams and be part of what they're doing up here," said Steve Redmond, a retired local educator who actually went to McMaster.

The Redmonds became the first two people to sign up for the Name-A-Seat fundraiser started by the Gryphon Athletics. For $1,000 you can have your name, family name, organization or group put on one of 362 premium seats in the 2,200-seat event centre part of the facility that should be ready to open in September.

"It's just a really invigorating, positive environment up here. It's been great for Taylor and our family and it's great for the community as a whole," he said.

Taylor, who has Down syndrome, has been volunteering and working part time in various capacity's in the Department of Athletics for five years. He also hosts a radio show on campus radio station CFRU.

"It's like his second home," his dad says. "We feel like we're part of the Gryphon family."

Taylor, a diehard football and basketball fan, knows many of the athletes and has interviewed several for his radio show.

"I like them all," he says of the Gryphons. "I know lots of people up here."

Steve Redmond said sports is something he and his son can bond over. Being able to have the Redmond name permanently on a seat in the new facility leaves a legacy of that bond.

While the $1,000 donation, which is payable over three years if you chose, gets your name on the seat, it doesn't guarantee you the seat for Gryphon sporting events in the 170,000 square-foot facility.

The school is also running a contest right now where you can win a named seat. Anyone who takes a selfie in front of the poster in the lobby of the W.F. Mitchell Centre and tweets using the hash tag #gryphonsnameaseat has a chance of winning.

For more information on the Name-A-Seat fundraiser go to www.buildingpotential.ca/#!gryphonsnameaseat/jrcsn.