Ryan Sheahan has been assistant at University of Calgary the past four seasons
Jan 10, 2019 10:21 AM By: GuelphToday Staff 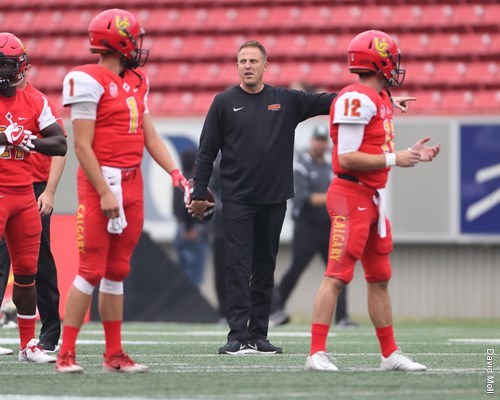 The Guelph Gryphons have named a new head football coach.

Ryan Sheahan comes to Guelph after serving as the Calgary Dinos assistant head coach and offensive coordinator for the past four years.

Sheahan, 38, is a Montreal native.

"Statistically and technically, there's no question that Ryan is one of the brightest young minds in the country. But what excites us the most about bringing him on board is the outstanding leadership qualities he possesses," said Scott McRoberts, Director of Athletics at the University of Guelph, in a news release.

"Ryan's focus on developing excellence both on the field, as well as within the classroom and community, will help shape the University of Guelph's football program as a long-term contender at the national level. We would also like to thank Todd (Galloway) for the incredible work he did this past season in leading our team to a Yates Cup appearance."

Galloway, who served as interim head coach for the Gryphons during the 2018 season, will remain on staff as director of recruiting.

Prior to his time at Calgary, Sheahan also spent six seasons coaching at his alma mater, Queen's, where he served as offensive coordinator and quarterbacks coach, while also spending one season (2012) in the CFL as running backs coach with the Hamilton Tiger-Cats.