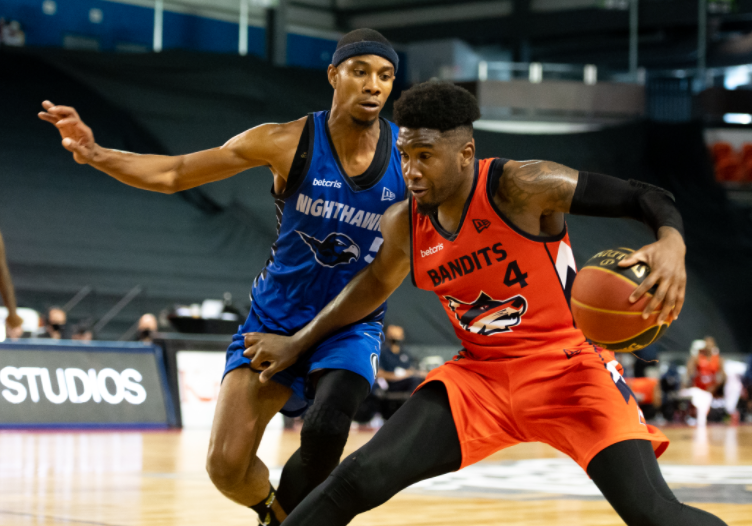 As a result of the loss, the Nighthawks will have to overcome a tight turnaround and be ready for day one of the playoffs, which begin Thursday. Guelph finishes fifth in the standings and will take on Ottawa at 7:30 p.m. Fraser Valley awaits the highest advancing seed from Thursday’s quarter-final action.

With the win, Fraser Valley closes the round robin with a 4-2 record and earns the second seed in the Series playoffs. Guelph finishes 3-3, tied with Hamilton and Ottawa but by virtue of the tie-breaker formula lands in the fifth seeded slot.

Four players scored in double digits for the Nighthawks, led by Kimbal Mackenzie with 12 points to go along with three assists.

It was clear from the game’s onset that both teams were dialed in defensively. Fraser Valley and Guelph shot just 31 and 21 percent, respectively, from the field in the first quarter. The Bandits led by five points after the first frame, but the Nighthawks caught fire in the second and dropped 33 points on Fraser Valley, due in large part to Guelph’s accuracy from three-point range. Tyrell Green and Myles Charvis entered halftime with two threes each. The Bandits managed to shoot just 4-of-14 from long distance in the opening half, which allowed Guelph’s defenders to clog the paint and prevent Fraser Valley from getting to the rim.

Despite an emphatic one-handed jam from Olu Ashaolu in the second quarter, the Bandits entered the half down seven points as Fraser Valley struggled to contain Guelph’s drive and kick action.

“We didn’t hit our assignments, so we wanted to keep the conversation about our original game plan,” said Bandits head coach and general manager Kyle Julius. “The guys came out in the second half and really changed the game with defence and then from there we got some fastbreak points, which we weren’t getting in the first half.”

The Bandits got off to a hot start in the second half behind pinpoint shooting from Manigat. Two quick triples from Manigat brought the Bandits to within one before a dime from Klassen to Ashaolu gave the Bandits their first lead since the first quarter. Fraser Valley outscored Guelph 22-7 in the third, but former Bandit Joel Friesen connected on a half-court heave to bring the Nighthawks to within five points entering the fourth.

Friesen’s end of quarter prayer set the stage for an exciting fourth quarter. Veteran Olu Famutimi scored a quick lay-up in transition to bring Guelph to within three, but the Bandits had an answer for the Nighthawks’ final push.

“We just need to be more physical,” Nighthawks head coach and general manager Charles Kissi said. “I feel like all the teams we’ve struggled with, they were just far more physical with us and I think that’s something we have to do. We can’t get caught up in anything other than just doing our jobs.”