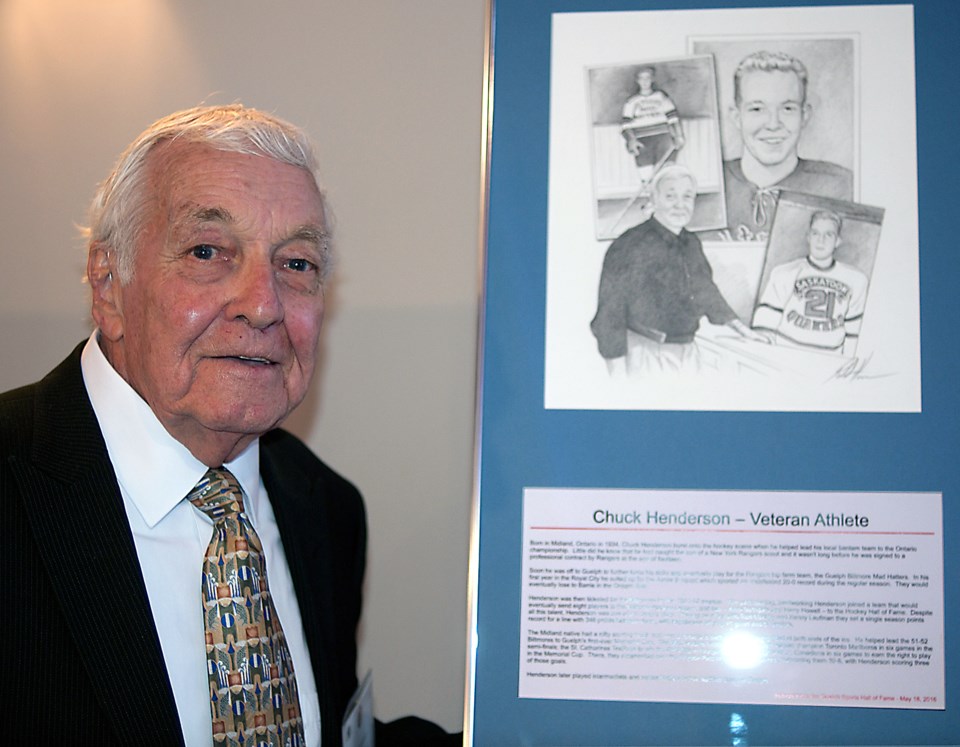 Chuck Henderson poses with the plaque that will hang in the Guelph Sports Hall of Fame Wednesday night at the Kiwanis Club of Guelph's 30th annual Sports Celebrity Dinner. A member of the Guelph Biltmore Mad Hatters that won the 1952 Memorial Cup championship, Henderson was inducted in the veteran athletes category. Rob Massey for GuelphToday

For Chuck Henderson, the 30th edition of the Kiwanis Club of Guelph's Sports Celebrity Dinner and the Guelph Sports Hall of Fame induction ceremonies Wednesday night at the Italian Canadian Club couldn't start soon enough.
"I'm so excited and honoured. It makes my life complete to be here," the 84-year-old said as he sat in the club's lounge half an hour before he and the other inductees would be paraded into the banquet hall. "I thought it was so exciting when they told me about it and I couldn't wait."
A member of the Guelph Biltmore Mad Hatters junior hockey team that won the national Memorial Cup title in 1952, Henderson was the veteran athlete of the Hall of Fame's Class of 2016. Other inductees were Guelph native and rugby player Maria Gallo in the athlete category, Atlanta Falcons general manager and former Guelph Gryphons and Centennial CVI football player Thomas Dimitroff Jr. in the builders category and the 1997-98 Guelph Storm hockey team that was edged in overtime in that season's Memorial Cup final in the team category.
"I know a lot of the fellows who are in here and I played with some of them like Aldo Guidolin and Louie (Fontinato)," Henderson said. "I never played with Bill Sweeney, but I knew Bill quite well. To be honoured with them, that's quite an honour for me."
Henderson came to Guelph in 1949 after he'd been signed by the New York Rangers organization when he was 14. The Biltmore Mad Hatters were one of their top junior teams at the time and he came to the Royal City to play with them. After a season of junior B in town, Henderson was an important member of the Biltmore Mad Hatters in their championship season, his second with the team, when he had 50 goals and 41 assists in 52 games.
"Winning the Memorial Cup and playing with a bunch of guys, we were all family," he quickly noted as his favourite memories of his playing days. "I played on a lot of other teams, but everyone was an individual and gone, but this team was one big family."
Gallo, now head coach of the varsity women's rugby team at the University of British Columbia, had a stellar playing career that included national university titles with the Guelph Gryphons in 1998 and Alberta Pandas in 2001 and '02 and several years on the Canadian national team.
However, she was a relatively late arrival in the sport as St. James high school didn't participate in girls' rugby when she was a student there.
"I played soccer and volleyball and basketball and everything but," she said. "One of my soccer friends was like 'You get too many penalties in soccer, you should come try out rugby' and I did."
After playing club rugby for Guelph Highland, Gryphon coach Jim Atkinson asked her to play for the University of Guelph team.
"I did and it just started from there," she said. "I was definitely a late bloomer, very physical but skill wise, you develop those as you get older. I just loved the grit of the sport. It was my niche and I just had to be me on the field and it went from there."
Dimitroff came to Guelph when his father, Tom Sr., took became head coach of the Guelph Gryphons. Now Thomas is one of the longest-serving general managers in the National Football League.
"When I heard that I was going to be inducted, I first thought of my father because I know how important the city of Guelph was to him," Dimitroff said. "Being recognized in a city around so many great people that I feel so strongly about and I will for the rest of my life means a great deal for me."
The 1997-98 Guelph Storm team was the first Storm squad to hoist the J. Ross Robertson Cup as champions of the Ontario Hockey League. They went 42-18-6 to post the league's best regular-season record, then won playoff series with Sudbury, Plymouth and Ottawa, losing a single game on their way to the OHL title.
Players on that team who would go on to play in the NHL included Brian Willsie, Kent McDonell, Manny Malhotra, Chris Hajt, Eric Beaudoin and Brian McGrattan.