Guelph Storm Game 7: 'It's going to be one hell of a game' 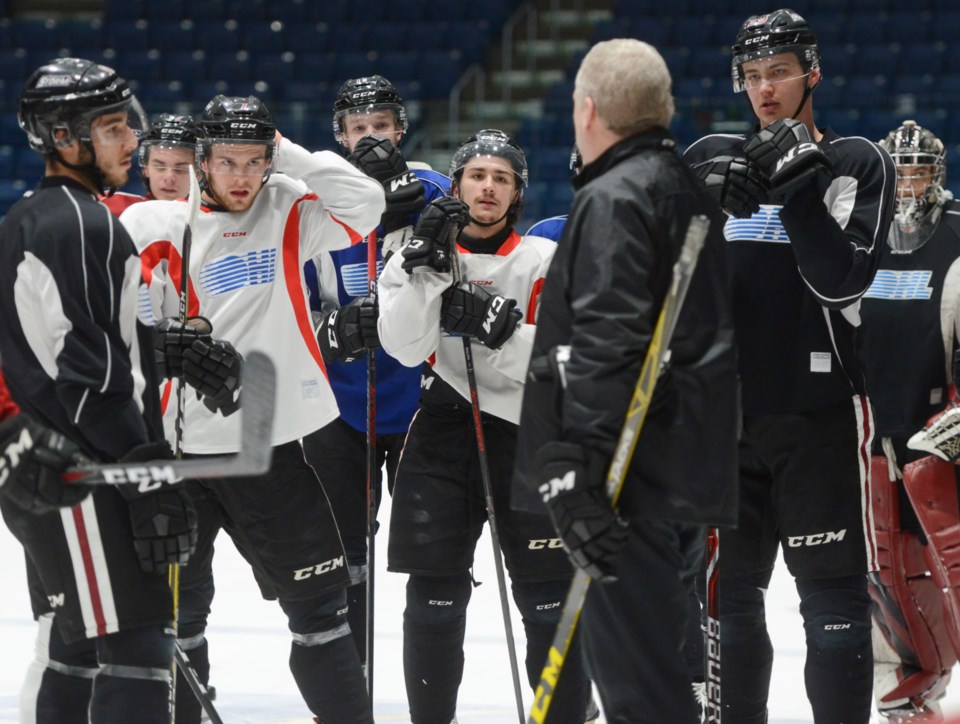 Exactly one year to the day, three members of the Guelph Storm will try to do it again Tuesday night: win Game 7 of a playoff series.

A year ago Markus Phillips, Nick Suzuki and Sean Durzi were members of the Owen Sound Attack, looking to move on to the next round by beating the Sault Ste. Marie Greyhounds in Game 7 at the Soo's Essar Centre.

They'll be looking for a different outcome than the 9-7 loss they suffered that night.

Just like a year ago, they will try and do it in hostile territory, as the Guelph Storm travels to London's Budweiser Gardens for the deciding game of the Western Conference sermifinal.

"That last Game 7 was a little bit of a wild one," Suzuki said Monday after practice. "It was a big game for all of us and we came up short."

Tuesday is the third time that Guelph has faced elimination, fighting back from a 3-0 deficit to tie the game at home on Saturday.

"We've been playing for our lives since we went down 3-0, so we've got to keep bringing that same attitude. It's going to be one hell of a game probably," said Suzuki.

"Everyone's playing some of their best hockey this season and we've got to keep building on that. I think the confidence in the room is high," Suzuki said.

In Game 7 a year ago Suzuki had an assist, Durzi had two goals and three assists and Phillips, who had a high ankle sprain, played two shifts then watched the rest of the game from the bench.

"It's anyone's game in Game 7 and it's a game of inches. One play can dictate the whole game," said Phillips.

After three straight wins to stave off elimination, the Storm might look at this opportunity as a blessing just to be there.

"We're not looking at it that way, we're just looking at the opportunity that we have in front of us and hopefully we have a big night (Tuesday) in London," Phillips said.

Storm coach George Burnett said he hopes and expects that the team's confidence is growing.

"We've done some better things to put ourselves in a position to be in a Game 7," Burnett said. "I expect them to play their best game and we have to demand and expect our own team to be better."

Burnett said one of the keys will be playing the game with pace.

"When we've played with pace we've certainly spent a little more time in the offensive zone and got some chances off the rush," he said.

"Right now it's about being in the present, staying calm and playing the game they love," Burnett said.

Game time is 7 p.m. For those not going to the game, the Storm is hosting a viewing party at Buffalo Wild Wings in the Harvard Plaza.

Local lad Karabela thrilled to be drafted by Guelph Storm
Apr 4, 2020 12:39 PM
Comments
We welcome your feedback and encourage you to share your thoughts on this story. We ask that you be respectful of others and their points of view, refrain from personal attacks and stay on topic. To learn about our commenting policies and how we moderate, please read our Community Guidelines.