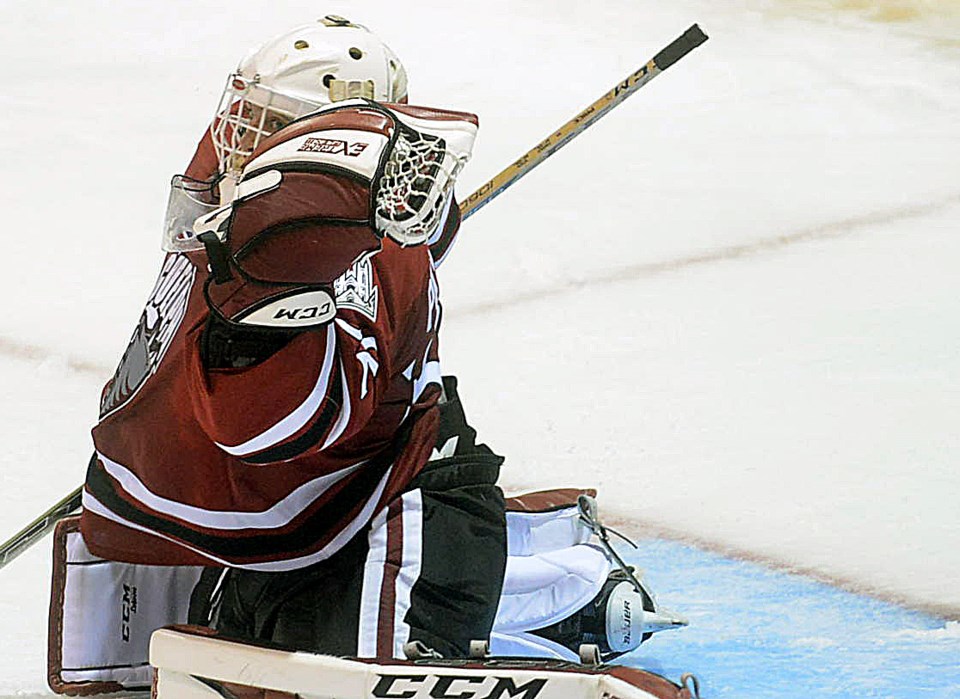 A glove save by Anthony Popovich during his OHL debut in Owen Sound Saturday, Oct. 1, 2016. Tony Saxon/GuelphToday

OWEN SOUND – That’s how you make an impressive entrance.

Guelph Storm rookie goaltender Anthony Popovich made 53 saves Saturday night to lead the Storm to a 4-2 win over the Owen Sound Attack.

“I just try to make as many saves as I could. How I was making them didn’t matter,” said Popovich.

The Belleville native backed up Liam Herbst in Guelph’s first three games. He found out he was starting in Owen Sound after Friday night’s home game.

“I think every first game in a new league is nerve-racking for a goalie. But once you get the first few saves under your belt things start to settle down,” said Popovich, 17, who played tier II hockey in Wellington last season.

He said being so busy helped him get in a groove early on.

“When you get some nice saves it gets me into the game,” he said.

He allowed a few big rebounds early on (“I think that was probably nerves”) but settled down after that.

His best work came in the second period on some Owen Sound power plays, stopping shot after shot.

“First start, especially in this building where you know you’re going to get a lot of shots … shots coming from everywhere … maybe he doesn’t know who can shoot the puck over there because they have some guys that can really shoot the puck. I’m really proud of him,” Skalde said.

This one was a nail biter.

Guelph held a 2-1 lead after two periods and got some breathing room when Givani Smith, who rushed back from Detroit to make the game, set up Albert Michnac for his first OHL goal.

But the Attack made it a 3-2 game midway through the third on Marcus Phillips’ power play goal and it wasn’t until Austin Hall banked in an empty netter with 10 seconds left in the game that the Storm could breath easy.

Matt Hotchkiss and Garrett McFadden had the other Storm goals.

Both goals that beat Popovich came on the power play.

Guelph has a tough weekend coming up. They host the Windsor Spitfires Friday night, play in Hamilton on Saturday then travel to Kitchener to face the Rangers on Thanksgiving Monday.