Guelph Storm honours one of its past greats

Todd Bertuzzi on hand to watch his jersey raised to the rafters at the Sleeman Centre
Nov 28, 2016 8:00 AM By: Tony Saxon 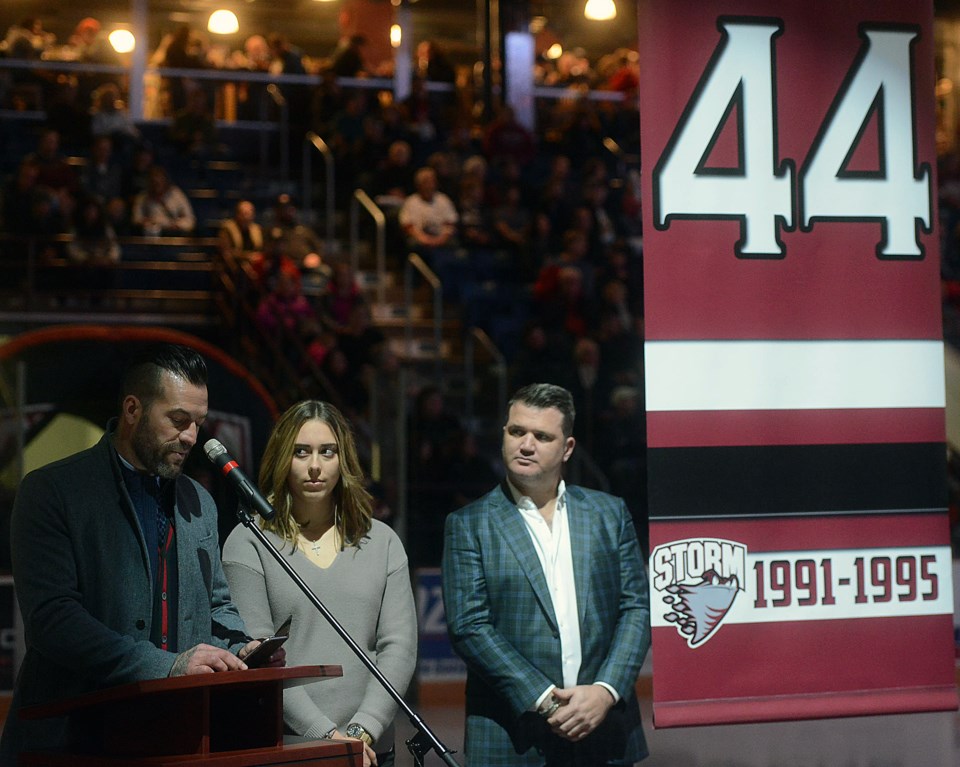 One of the most dominant power forwards to ever play in the OHL was honoured by the Guelph Storm before its game Saturday at the Sleeman Centre.

Todd Bertuzzi, who played for four years in Guelph from 1991 to 1995, had his number raised to the rafters at the Sleeman Centre in a pre-game ceremony before their game against the London Knights.

“There are so many people I want to thank,” said Bertuzzi, mentioning former and current Storm general manager Mike Kelly, his former teammates and former team president and co-owner Jim Rooney.

“To all the players I played with: I was only as good as you guys made me,” Bertuzzi said, “pushing and driving me to be the best player that I could be.”

Bertuzzi, who was accompanied on the ice for the pre-game ceremony by his daughter Jaden, was introduced by former teammate Jeff O’Neill, whose jersey was the first to receive the same honour a year ago.

Storm co-owner Rick Hoyle said a few words before turning the microphone over to O’Neill and then Bertuzzi.

“Todd is clearly one of the greatest players in the history of the Guelph Storm,” Hoyle said.

O’Neill talked about how Bertuzzi time and again took the team on his back during their time together.

A video featuring words from Storm GM Mike Kelly, former co-owner Jim Rooney, along with former teammates and even his Guelph Billet, was played.

Fans on hand received a commemorative Bertuzzi puck as they entered the game.

The night was the annual Storm alumi night, with 40 former players accompanied by 100 family members on hand for the game as guests of the team.

Bertuzzi, the franchise’s first ever pick in the OHL Priority Selection and he holds the franchise record for goals in a season, is third in career points, fourth in career goals, assists, and playoff points.

Current Storm winger Givani Smith said Bertuzzi had the type of career he hopes he can have some day.

“That’s exactly how I want my career to be: be the best power forward to play against and to play with,” Smith said.

The Storm went on to lose Saturday’s game 5-3 to the Knights.