Guelph Storm looks to dampen some Spirit in series opener 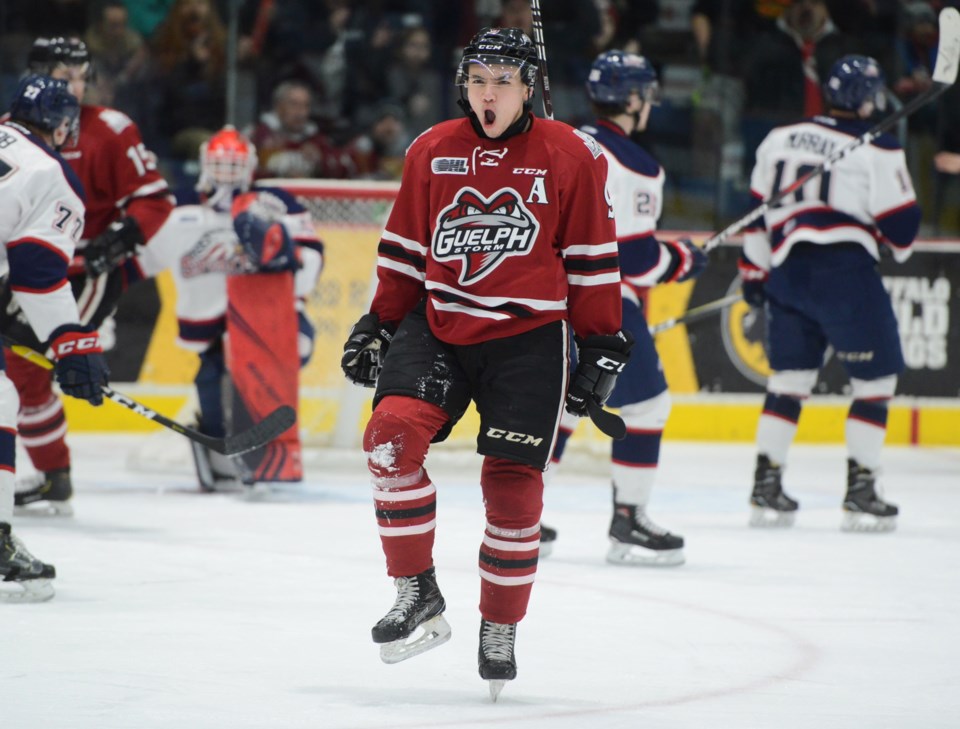 The Guelph Storm isn’t the only team that benefitted from adding skill and experience at the trade deadline.

The Saginaw Spirit did their fair share of tinkering too, picking up Justin Murray from Barrie and Reagan O’Grady, Owen Tippett and Ryan McLeod from Mississauga.

“One of the things we recognized with our group is that we did lack some playoff experience,” said Spirit coach Chris Lazary on Wednesday.

“The presence in the room, the calmness. There’s been some crazy moments where you need your leadership to get you through and Owen Tippett and Ryan McLeod, plus Justin Murray and Reagan O’Grady have been through it before.”They’re very calm with their message, they keep the group together and they lead by example,” Lazary said.

The Spirit is entering uncharted waters Thursday when they play in the third round of the playoffs for the first time in the franchise’s 17 seasons in the league.

“It is exciting times. We’re just a proud franchise right now. I know ownership’s pretty excited, our management group’s excited, our coaching staff and players are thrilled to have this opportunity,” Lazary said.

“We recognize what a special moment it is and how fortunate it is to be here, but we feel like we’re not done yet. We’re not satisfied.”

Captain Damien Giroux said a lot of the Spirit players had never won a playoff game until this recent run.

“All of our players are pretty excited. It’s a thrilling moment and we’re excited to keep it going,” Giroux said.

The battle for the Wayne Gretzky Trophy for the Western Conference Champion starts Thursday night at 7:11 p.m. in Saginaw.

The winner meets the winner of the Ottawa 67’s/Oshawa Generals Eastern Conference final in the OHL championship.

Saginaw made the playoffs 12 times, never making it further than the second round on three occasions.

Guelph and Saginaw have played each other three times in the first round of the post season, with Saginaw winning two of the three meetings.

The Storm, who travelled to Saginaw on Wednesday, became just the fifth team in OHL history to battle back from a 3-0 series deficit to win the series when they beat the London Knights.

“The resiliency these guys have shown in this last series was just unbelievable,” Storm captain Isaac Ratcliffe said.

“The message in the room (Tuesday) was ‘keep a strong head and we’re not done yet.’ We’re just trying to keep that same mindset going into this series.”

Storm coach George Burnett naturally had nothing but praise for his opponent.

"We've got to get past our emotional Game 7 (Tuesday) night and get refocused," Burnett said.

"We understand the task is a tall one. Saginaw is a high-powered team that moves the puck as well as anybody in the league, they've got great goaltending and no weaknesses," Burnett said.

"Be rested, be ready to go and make sure we're focused on Saginaw, not thinking in the past."

Game 2 is in Saginaw on Saturday. Games 3 and 4 are in Guelph on Monday and Wednesday.

Series by the numbers:

Guelph Storm's Nico Daws named OHL Goaltender of the Year
May 19, 2020 11:17 AM
Comments
We welcome your feedback and encourage you to share your thoughts. We ask that you be respectful of others and their points of view, refrain from personal attacks and stay on topic. To learn about our commenting policies and how we moderate, please read our Community Guidelines.