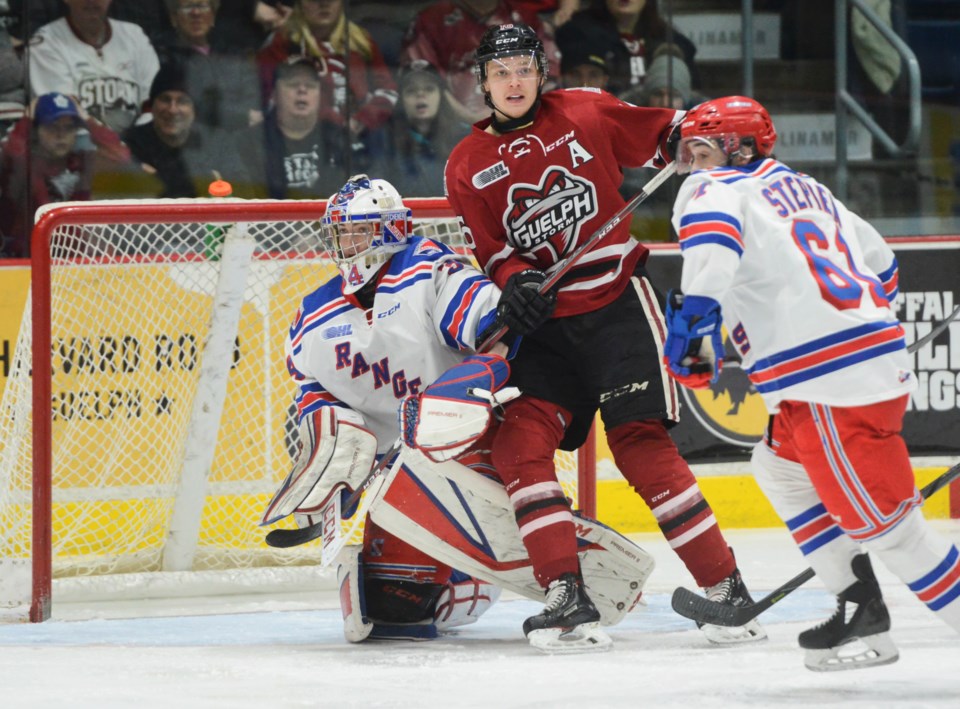 Nate Schnarr goes the the front of the Kitchener Rangers net Sunday at the Sleeman Centre. Tony Saxon/GuelphToday

It's been a dream season for the Guelph Storm's Nate Schnarr.

On the weekend the 20-year-old Waterloo native joined an exclusive club, becoming just the 10th player in team history to hit the 100 point mark in a season.

That's a 61-point jump from the 39 he had last season, and there's still three games left.

"A couple of weeks ago we only had 11 games left and I was still 23 points out," Schnarr said.

"I had a great weekend last weekend and came into this week looking at it ... it's something in the back of my mind, but I really didn't think too much about it.

"It feels really good and something I've worked toward all season," Schnarr said. "To be able to have that much success means a lot."

Schnarr hit the 100 mark with two points in Owen Sound on Saturday night.

"No, not at all," he admits. "We did goal setting (before this season) and I was nowhere near that. It's a pleasant surprise for sure."

A recent torrid scoring spree that saw him score 21 points in nine games helped get him to the magical 100 point mark.

Last week he was named Canadian Hockey League player of the week and Sunday's game against Kitchener was the first in 10 games he didn't record at least one point.

"That's a pretty special plateau, there's not many guys that can say they reached that in this league," Storm coach/general manager George Burnett says of Schnarr's 100-point season.

"I would say that Nate is certainly one of the most improved players in the league this year," Burnett says. "You like to see guys that put the work in be rewarded and he's had a strong, consistent year for us regardless of who he's played with.

Schnarr didn't even make the Storm in his first attempt.

After being drafted in the third round of the OHL Priority Selection in 2015, the team decided it was best he get a year of seasoning playing junior B hockey with the Waterloo Siskins.

He joined the Storm the next season, recording 36 points, then had 39 points last season.

That was good enough to get chosen in the third round of the National Hockey League entry draft by the Arizona Coyotes and Schnarr credits Mark Bell of the Coyotes' player development department with his development this year.

Schnarr, who had shoulder surgery in 2017, credits being able to have a full, strong summer with part of the reason behind his emergence.

And, like all good hockey players, is quick to credit his linemates as well as Arizona player development coach Mark Bell, who has spent a lot of time in Guelph.

"To be able to have that upper head looking at you and giving you tips and things to work on is great," Schnarr says of Bell.

Schnarr and the rest of the Storm wrap up the regular season on Saturday in Erie. They are assured of finishing fourth in the conference.

Then it's playoff time, which open in Guelph on March 22 at home against either the Kitchener Rangers or Owen Sound Attack.