Jack Hanley and MacKenzie Entwistle both played in the 2018 Memorial Cup with the Hamilton Bulldogs
0
May 16, 2019 1:53 PM By: Tony Saxon 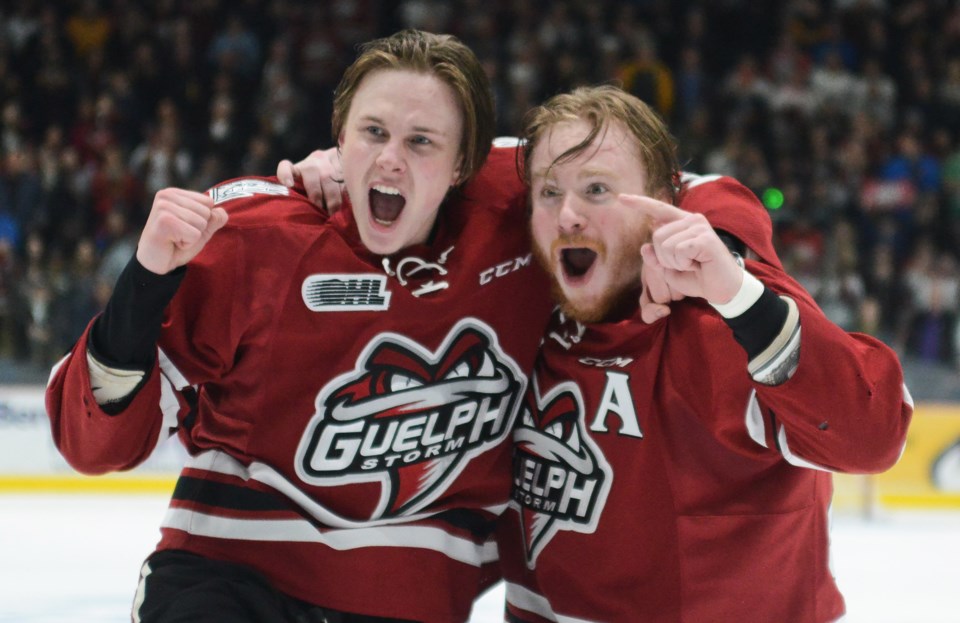 Only two members of the Guelph Storm have ever played in a Memorial Cup and they both offer the same advice to their teammates: hit the ground running.

"Starting our series like we did (in the OHL playoffs), you can't really do that at the Memorial Cup," said Storm forward MacKenzie Entwistle, who along with defencemen Jack Hanley was a member of the Hamilton Bulldogs that made it to the semifials of the 2018 Memorial Cup.

"The biggest thing is that you've got to start on time and set yourself up for a big tournament," he said.

"It's kind of like a minor hockey tournament in the sense that you can't lose a game. If you lose a game then you have to hope another team loses and you don't want that, you want to win all your games and control what you can control," Entwistle said.

Hamilton lost its first game in 2018 to Regina before bouncing back with a pair of wins. They lost in the semifinals, 4-2 to Regina.

Three of their four games in 2018 were decided by one goal, the fourth had an empty-net goal.

"Last year we lost one game and then we're sitting in our hotel room watching other teams play and thinking 'hopefully they win .... hopefully they score' and it's not fun like that," Entwistle said.

"You've got to be ready for every game, because you can get behind easy in this tournament," Hanley said. "You don't want to get off on the wrong foot.

"You don't want to have to depend on other teams, you just want to do it yourself and pave your own way."

But the magnitude of the event shouldn't stop you from enjoying it, Entwistle said.

"It's a fun tournament. There's tonnes of scouts, tonnes of NHL teams there. Eyes are always on you and in practice there's hundreds of people there," Entwistle said.

Hanley said most of the players on the team are older and have been to NHL training camps so are used to all the attention and sense of importance the event holds.

"We'll just handle it as we do every day," Hanley said.

The Storm flew out to Halifax Wednesday and play their first game Saturday afternoon against the Quebec Major Junior Hockey League's Rouyn-Noranda Huskies, who also finished the regular season ranked first in the country.

Tuesday they wrap up the round robin with a game against the Western Hockey League champion Prince Albert Raiders.

"Mostly we're just going to try and play our game and if we play our game we know we have a good chance to win it," said Storm goaltender Anthony Popovich.