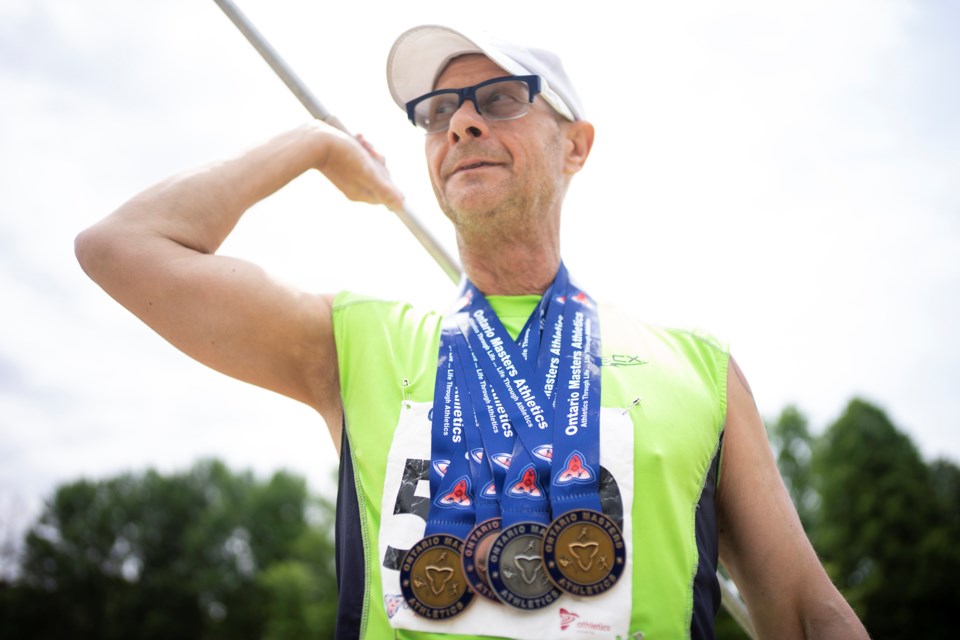 A Guelph man says he has been given a second chance as a medal-winning track and field athlete after living through addiction issues and he hopes to become an inspiration to others who have gone through similar issues.

Now 59, Steve Baldamus gave up his love of track and field athletics at the age of 28 when, as he described it, ‘life happened.’

Baldamus moved to Guelph from Brampton with his son Nick about six years ago.

“The reason we moved here was because my son was starting high school and I wanted to get him out of Brampton, because I know he wouldn’t have been happy there,” said Baldamus. “I knew he needed to be in a better place, and me too.”

Nick lives with special needs and participated in a Special Olympics bocci ball event at University of Guelph. As soon as he stepped into the indoor track facility to support his son, Baldamus got a familiar rush of energy and knew he had to start competing again.

He got his chance last fall, when Baldamus was challenged to compete in the Guelph Victors Turkey Trot.

His challenger was Jennifer-Lynn Schneider, herself an athlete who has at time struggled with addiction.

“She kept telling me I had to do this,” said Baldamus. “No training, no sleep, I just thought what the hell and ran it.”

One thing led to another and Baldamus began to train seriously over the last six months or so, adding hurdles, discus and javelin to his routine.

It paid off, as he competed in a number of mini indoor meets over the winter months.

Recently, Baldamus competed in the Ontario Masters Outdoor Track and Field Championships in the 55 to 59 age group, bringing home gold in the steeplechase and hurdles, silver in the javelin and bronze in the discus.

“I hadn’t run competitively in 30 years,” said Baldamus. “I hadn’t done the steeplechase in 40 years.”

In the winter months, Baldamus trained for his events by running back and forth in the hallway of his apartment building. He measured it and it is exactly 100 metres. He also used the stairs in the 10-storey building to train.

Now that the weather has become a little warmer, Baldamus has been using a local baseball diamond to practice discus and javelin. Most of the equipment he uses are second-hand.

He said people passing by give him a lot of encouragement or come over to ask him what he is working on.

In four weeks, he plans to compete in the pentathlon at another event in Toronto, representing Canada at the World Masters Athletics event for the North America, Central America and Caribbean Region.

Baldamus said he is the only athlete from Canada in his age group competing in the event because he is the only person who has qualified in the five pentathlon events.

“Most people my age can’t do more than one or two. I figure I am in good enough shape and I am getting better,” said Baldamus. “I just want to compete and represent Canada.”

Baldamus said he has had to skip some events that he feels he could compete in because they are too far from home and he doesn’t have the money to go. In the winter he started up a crowdfunding page, which has so far received no money, mostly because he hasn’t been pushing it.

“I’m not one to ask for money,” said Baldamus.

Next summer, Baldamus will be 60 years of age and the World Masters will be held in Toronto. He plans to once again compete for Canada at the event.

“That is the big thing I am looking forward to, because I will be 60 then and the hurdles get lower, the distances get shorter and everything gets lighter,” he said.

Competing on the world stage is giving Baldamus one more incentive to stay clean.

“At the World’s you have to get drug tested. Once I do it once they can test me out of competition, so I have to stay clean,” he said.

Baldamus said he feels like the people in his community are cheering him on when he goes to Chalmers Community Service Centre or the Drop-In Centre.

“I am trying to be a bit of an example to show them they don’t have to waste their life away, there’s other things to do,” he said.