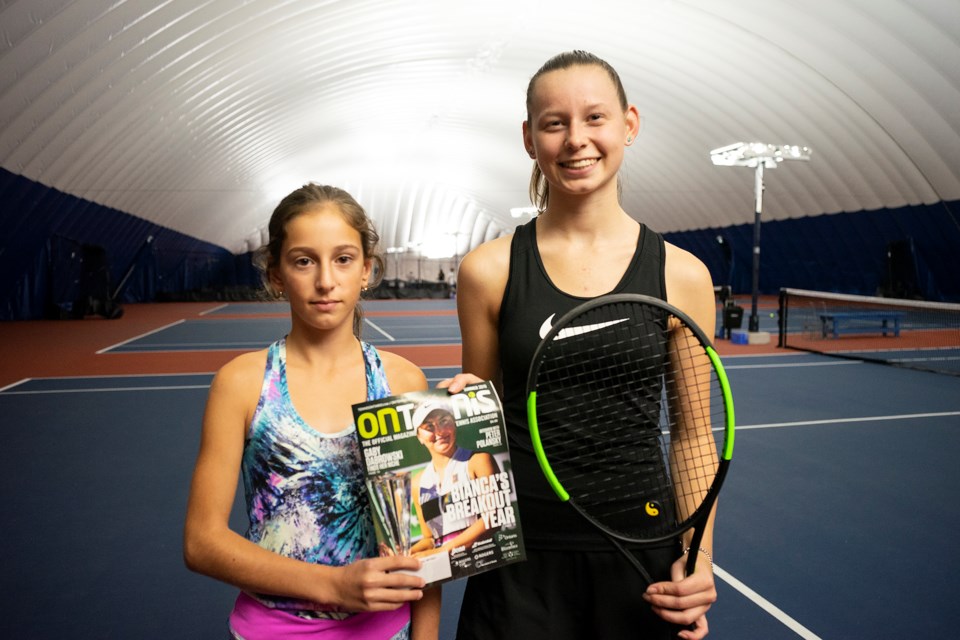 Theodora Dragan and Isabel Heyland pose with a magazine cover featuring Mississauga-born Bianca Andreescu, who won the U.S. Open on Saturday. The girls are enrolled in the competitive program at Royal City Tennis Club. Kenneth Armstrong/GuelphToday

Like many tennis fans across Canada, Grade 6 student Theodora Dragan was watching the U.S. Open final on Saturday afternoon in a match between Mississauga's Bianca Andreescu and the legendary Serena Williams.

Dragan was one of a number of junior players practicing on Monday in the Royal City Tennis Club’s competitive program. She is working toward her personal goal of becoming a professional tennis player when she gets older.

“I basically want to achieve the same things she has,” said Dragan of Andreescu’s success.

Many of the young tennis hopefuls at the club hope to follow in the footsteps of Andreescu, who became the first Canadian — and the first player born in the 2000s — to win a Grand Slam singles title.

“I think she has a lot of variety with her shots,” said Dragan. “She doesn’t just pick one shot and use it throughout the match. She has multiple strengths and uses them equally.”

Dragan said 19-year-old Andreescu is a good role model on and off the court.

“I think she is, especially because she has said she had problems in the past — she would slam rackets on the ground and get mad on the court — but she fixed that and calmed herself,” said Dragan. “I seek to be like her, I try to have a variety in my shots and I would like to start to be composed.”

With over 40 years experience, Royal City head tennis pro Harry Greenan has seen many spikes of interest in tennis over the years. He said Canadian youth tennis is currently riding a wave of popularity that started with the rise of Milos Raonic a few years back.

After Andreescu's dramatic wins in the Roger's Cup and U.S. Open, Greenan said there has been an increase in junior players being signed up for the club's winter sessions.

“Pretty soon there will be a lot of Biancas out there,” said Greenan. “The fact that Bianca has put tennis in the regular news — not just sports — it has helped tennis.”

Greenan said Andreescu showed a lot of poise when she held off Williams’ comeback attempt.

“For a 19 year old to go out and beat her — she has a great personality for the game and good inspiration for these girls,” said Greenan.

Club pro Sonja Palmer has seen that resiliency close up. In August of 2015, playing at the time as Sonja Molnar, she met Andreescu in the Roger’s Cup pre-qualifying competition.

Palmer won the first set against then-15-year-old Andreescu and had almost finished the second set at 5-2, when the tide changed.

“She was pretty feisty,” recalled Palmer. “She didn’t get down on herself, even though I was ahead.”

Andreescu came back to win in three sets, earning a spot in the Roger’s Cup qualifying.

“That was pretty awesome to see from such a young girl,” said Palmer.

Much of the same spirit was on display during Andreescu’s U.S. Open match on Saturday, said Palmer.

“I think she is even more fearless now — she seems to just walk on the court and play her game and it doesn’t seem that anything phases her,” said Palmer.

Not long after the 2015 match, Palmer got married and retired as a professional tennis player. She had a lot of success in her pro career and at the University of Iowa, but she said the life of travelling and competing was not as glamorous as it seemed.

“I took a little step back. I have definitely once again found my love for the sport through coaching,” said Palmer.

Grade 11 student Isabel Heyland is another young player being developed at Royal City Tennis Club. She missed Saturday’s match, but caught the highlights later on YouTube.

Heyland has been playing tennis since the age of four and says she loves to compete in tournaments. Watching Andreescu has been an inspiration.

“Last year she was outside the Top 50 but as of yesterday she was ranked fifth in the world,” said Heyland. “It shows that hard work really pays off.”

Heyland said she likes how Andreescu is kind off the court, but fierce when she is playing.

"She doesn’t give up,” said Heyland.