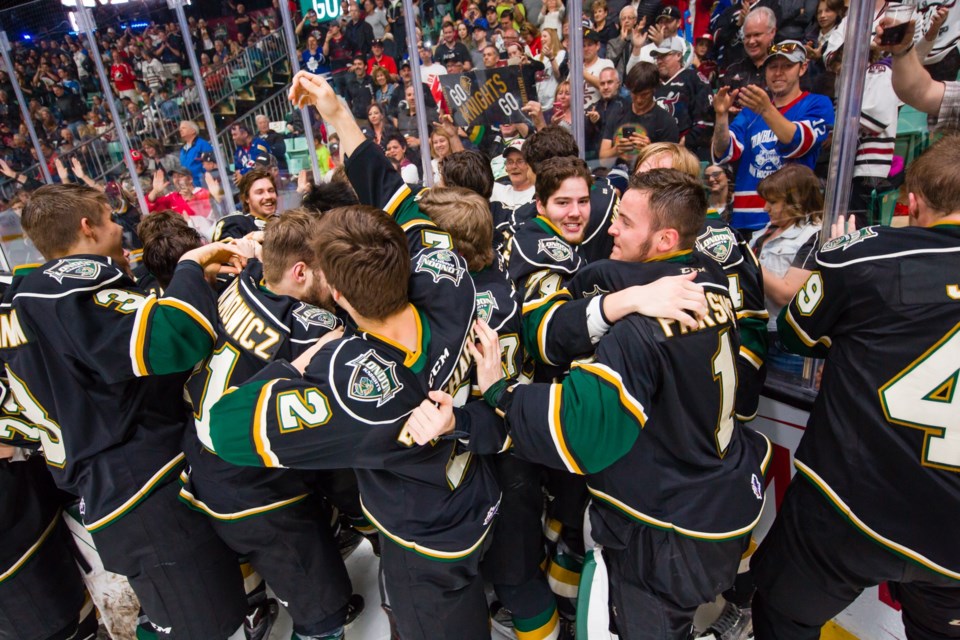 RED DEER, AB – It was 11 years to the day that the London Knights organization won its last MasterCard Memorial Cup title in 2005.

Tkachuk broke down the left wing and his shot from the left faceoff circle beat Huskies goaltender Chase Marchand to give the Knights the title.

Tkachuk refused to call himself a hero following the win.

Tkachuk also said he “fell over myself I was so happy.”

The game saw the Knights trail for the first time in the tournament when Julien Nantel gave the Huskies a 2-1 lead midway through the third period.

Forward Owen MacDonald said that even though the Knights were down, the feeling was the team could battle back late.

“We’ve been down a lot worse than that in the playoffs and bounced back,” MacDonald said. “We’re a pretty resilient group.”

MacDonald would call the Knights a “special group.”

“It’s pretty cliché but words can’t describe it,” said MacDonald. “Our team is a special group. We knew when we were down 2-1 we’d be fine.”

“We come to compete every night,” Graves said. “Even if we’re down a couple of goals we’ll try to find a way. That’s what’s special about this group.”

For the overage defender, the win caps off a five-year OHL career.

“As soon as I stepped in the room I felt something special,” Graves added. “It’s a great group of guys. I’ve made friends with every single one of these guys for the rest of my life.”

Tkachuk scored a pair of goals for the Knights while Christian Dvorak also scored.

“He was outstanding and he’s been that way all year,” Knights Coach Dale Hunter said. “That’s why we can win 17 in a row. To win 17 in the playoffs and here at the Memorial Cup, that’s pretty hard to do.”

“I don’t think I’ve ever skated that fast in my life,” Parsons said of joining the celebration. “Seeing that puck hit the crossbar and back bar and drop straight down, it was unbelievable.”

Francis Perron had the other Huskies goal.

Marchand finished the night with 30 saves.

“They’re incredible,” Marchand said of the Huskies. “Every part of the team is incredible people. It’s tough to say goodbye to all of them. We’ve had so many great memories. Just because we lost tonight, it doesn’t mean we’re losers. We’ve accomplished so much here and I’ll remember this forever.”

“It’s tough losing like that but I’m really proud of this group,” said Huskies forward Timo Meier. “It was a pleasure playing with all of those guys.”

With little surprise, Marner was named the tournament MVP after posting two goals and 14 points in four games.

With files from Lucas Punkari