The Storm scored three power play goals in the second period in the win
Nov 1, 2019 11:11 PM By: Brad Coccimiglio 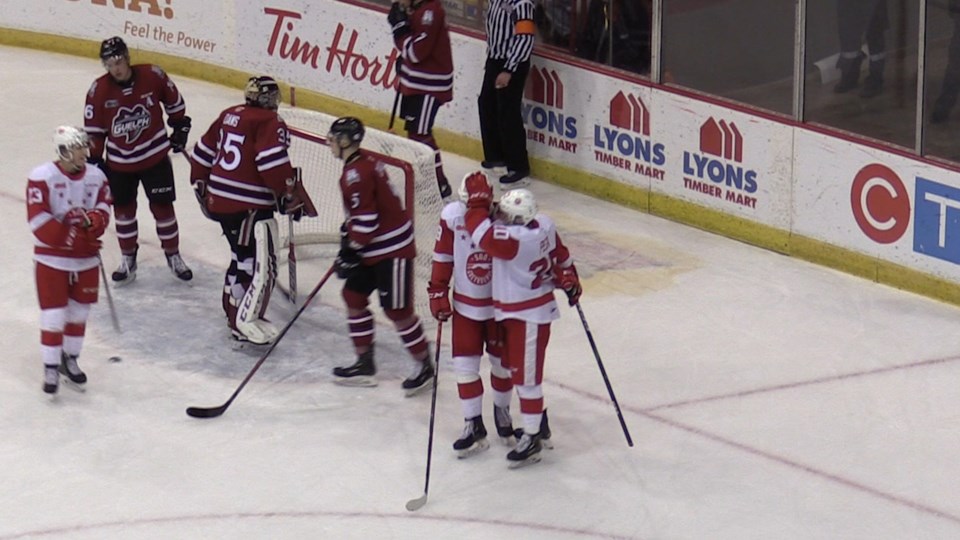 SAULT STE. MARIE, ONT. - In the midst of a four-game losing skid and having lost eight of their last 10 games, the Soo Greyhounds are having a tough time looking at the positives.

A strong start and a lead in the opening period was something the Greyhounds couldn’t maintain as the Guelph Storm broke open a tight game in the second period in a 6-4 Ontario Hockey League win over the Greyhounds.

“It’s getting old,” said Greyhounds coach John Dean of the strong start. “There are a lot of good things but it’s really getting old. At the end of the day, we’ve got to find a way to stop shooting ourselves in the foot.”

For the Storm, the start was something that could have been a lot worse.

“We could have been down more than one after the first period,” said Storm coach George Burnett.

“Our last 10 minutes, we started to get a little bit of momentum. We had some offensive zone time. Not a lot of shots, but at least some puck-possession time.

The Storm scored three power play goals, two on both ends of a double minor to Cullen McLean, in a span of 1:51 to turn a 1-0 deficit into a lead and would lead 4-1 before the second period was half over.

“The penalty kill struggled,” Dean said. “Our tendency when things go bad is to overwork and try to do too much.

“Guys were trying to do too much and take over other guys jobs,” Dean added.

The Storm finished the night 3-for-5 on the power play in the game.

“To respond the way we did on the power play is encouraging,” Burnett said. “We haven’t been a terrific power play team. We had a lot more movement tonight.

Pavel Gogolev had a pair of power play goals for the Storm and finished with three on the night and a pair of assists.

“When Gogolev has some of those opportunities, he’s a pretty special player,” Burnett said.

Cedric Ralph had two goals and an assist while Fedor Gordeev and Cam Hillis also had three-point nights with three assists each.

Sault product Keegan Stevenson had a goal and an assist for the Storm.

Dominic Mufarreh had a pair of goals for the Greyhounds while Jaden Peca and Joe Carroll also scored.

Goaltender Christian Propp got the start for the Greyhounds but was pulled after giving up four goals on 12 shots.

“At the time, we needed to do something,” Dean said of the goaltending change. “We already took our timeout and we thought it was a good opportunity to get a little bit of life into the team.”

Ethan Taylor made 10 saves the rest of the night.

“Anytime you lose and outshoot a team, the easy argument is that we want a save but if we’re always depending on our goalie then what are we saying about ourselves as a hockey club,” Dean said.

Nico Daws made 32 saves for the Storm.

“He’s been terrific,” Burnett said. ‘He recommitted himself this summer. He had a terrific summer of strength and fitness.

“He gave us some big saves when we needed him to,” Burnett added. “He’s been calm and cool in the net and a big reason why we’re off to a decent start for a young group.”

The loss drops the Greyhounds record to 6-9-1-0 heading into action on Saturday night at home against the Windsor Spitfires. Puck drop at the GFL Memorial Gardens is set for 7:07 p.m.

The Storm improve to 7-4-1-2 and return to action on Saturday night in Saginaw against the Spirit.

Terry, who won the OHL’s Ivan Tennant Memorial Award last season as the OHL’s top academic secondary school student, currently has an A+ average in grade 12 classes at Our Lady of Lourdes Catholic High School.

“Zack is the consummate student-athlete,” said Storm academic advisor Colleen Driscoll in a prepared statement. “He has continued to excel in the classroom maintaining his high academic standards as evidenced in his A+ average. His teachers describe him as hard working; conscientious; possessing great potential and skills. His strong academic achievement is a direct reflection of his strong work ethic and commitment to excellence.”

In other action around the league on Friday night, in Kingston, Brett Neumann had a goal and two assists as the Oshawa Generals beat the Kingston Frontenacs 5-1.

In St. Catharines, a five-goal second period lifted the Ottawa 67’s to an 8-3 win over the Niagara IceDogs. Mitchell Hoelscher had two goals and an assist while Jack Quinn had a goal and two assists for Ottawa.

In North Bay, Kalle Loponen had the game winner late in the third period as the Sudbury Wolves beat the North Bay Battalion 3-2. David Levin had a goal and two assists for Sudbury.

In Saginaw, shootout goals by Tyson Foerster and Nicholas Porco lifted the Barrie Colts to a 4-3 win over the Saginaw Spirit. Barrie goaltender Arturs Silovs made 35 saves.

In Kitchener, Barret Kirwin had a pair of goals as the Owen Sound Attack beat the Kitchener Rangers 5-2.

In London, Connor McMichael scored at 3:04 of overtime to give the London Knights a 7-6 win over the Erie Otters. McMichael had three goals and three assists in the win. Kurtis Henry had two goals and an assist for Erie.

Friday saw a pair of transactions around the league as well.

The Kingston Frontenacs claimed winger Dustin Hutton off waivers from the Peterborough Petes while the Erie Otters acquired overage defenceman Drew Hunter from the Niagara IceDogs in exchange for a fourth round draft pick in 2021.