The Whole Story: When an interview at a candy store becomes something much bigger 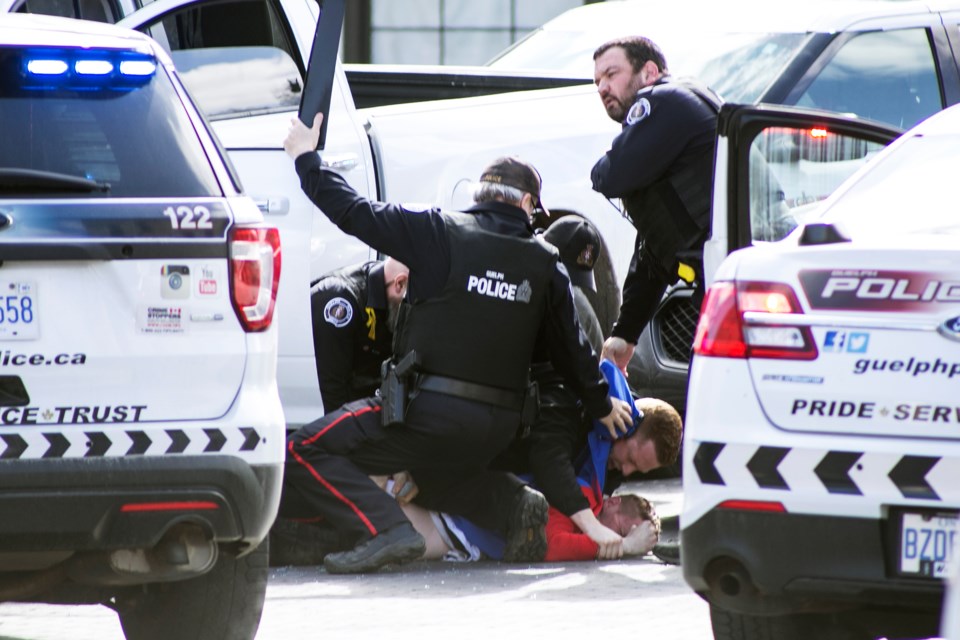 Guelph Police take a suspect into custody after three cruisers collided with a pickup truck that had been reported stolen Monday afternoon on Carden Street. Kenneth Armstrong/GuelphToday file photo

This past Monday afternoon was peaceful and sunny in Downtown Guelph, at least it was until officers with the Guelph Police Service made a dramatic takedown of a suspect directly in front of city hall and just down the street from where I was standing.

I happened to be on Carden Street at exactly that moment, waiting to interview a local shop owner who was trying to get the provincial government to reconsider the denial of his application for COVID small business relief.

From where I was standing at Sweet! Candy on Carden, I saw a white pickup truck driving westbound on the street. I heard the police siren before I saw any police cars and after just a few seconds three cruisers had collided with the truck, pinning it on the street.

Over the years I have covered a number of police actions like this, but after a year of working mostly from home due to the pandemic this seemed to come out of nowhere.

The camera I was holding had a zoom lens attached, allowing me to keep a respectful distance about 100 feet from the scene of the takedown, while still zooming in close enough to get some photos for the public record.

A bystander who was much closer to the scene provided GuelphToday with a video of the takedown as well.

Scenes like this have the potential to go bad pretty quickly and, although the suspect and one officer came away with minor injuries, I am thankful no one was seriously injured.