OTTAWA — The other day, one of Peter MacKay's campaign workers drove more than an hour outside Montreal to pick up a single ballot for the Conservative leadership race.
Aug 21, 2020 6:01 PM By: Canadian Press 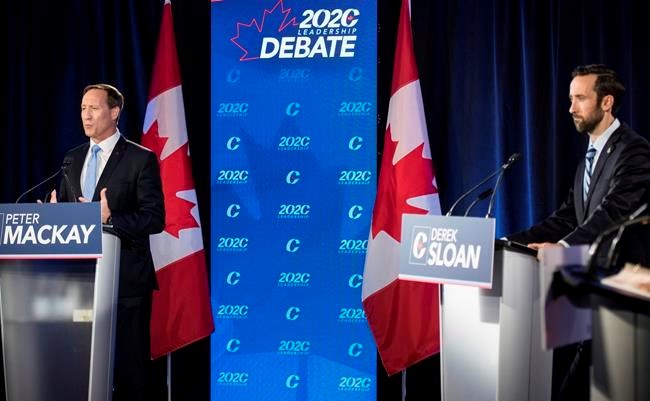 OTTAWA — The other day, one of Peter MacKay's campaign workers drove more than an hour outside Montreal to pick up a single ballot for the Conservative leadership race.

A volunteer on Ontario MP Erin O'Toole's campaign jumped in her car, along with her service dog, to spend hours on the highways of southwestern Ontario to pick up ballots for him.

For all four candidates in the leadership race, which wraps up Sunday, every ballot matters — but where they come from could set the stage for the months ahead.

The results will be revealed by province, exposing in real time how much, or how little, support the candidates have in each region of Canada, as well as their potential prospects there during a federal election.

After the 2019 election, where Western alienation was a major theme, and in a race where none of the four candidates are from the West, all eyes will be on those numbers. Conservatives, and potentially their rivals, will wonder: does the winner have the support of the grassroots in Alberta? What about any momentum in Quebec?

Regional divisions may not be the only ones exposed.

The party's ranked ballot means a voter's second choice can be as, if not more, important than their first. That's been a driving force for many of the candidates in this contest, which launched after Andrew Scheer announced his intention to resign.

If Sloan places fourth in the first round of counting, his name drops off and his supporters' second choices are counted. If those votes all go to Lewis, but then she is dropped in the next round, their say in leadership ends there.

Brad Trost, who placed fourth in the 2017 race thanks to social conservative backers, urged them earlier this summer not to go that route.

"If there is no hope of you voting for a candidate there is very little hope of a candidate working for your vote, and the issues you care about are more likely to be discounted," he wrote in an op-ed.

For supporters of Lewis, the calculus is different.

The Toronto lawyer is a social conservative, but has seen support grow beyond that base, not because of her social conservative policies but other facts: she's a Black woman, from Toronto, and her pedigree could present a formidable challenge to the professed feminist credibility of the Trudeau Liberals.

The candidate her supporters mark number 2 on their ballots could determine the winner, if she does not win outright.

It's why the O'Toole campaign, running more to the right of the political spectrum, has in recent weeks effectively damned her campaign with faint praise, noting her accomplishments, but suggesting her people back him.

In a mid-August campaign email, MP Garnett Genuis said while Lewis appeals to him, she's too much of a political rookie. She's never held office. The party needs to be able to hit the ground running, he said.

MacKay, a former cabinet minister looking to return to politics, stands alone among the triumvirate of his opponents, as he's fought his campaign squarely for the votes of progressive side of the party, the so-called disaffected Liberals and Red Tories who once flocked to one of his more prominent supporters — former Progressive Conservative prime minister Brian Mulroney.

It was Mulroney who before Stephen Harper was able to knit together a coalition of conservatives to form government, though it was in Mulroney's wake that the Reform movement would spring up in Alberta and eventually cannibalize the PCs — led by MacKay at the time — themselves.

MacKay's campaign is partially counting on people being ready for a reboot. He launched his leadership campaign from the very place his political career started, with a speech heavy on optimism and a promise of unity.

How the party chooses a leader is also a throwback to the PC days, when MacKay was leader. When the party merged with the Canadian Alliance, a condition was that every riding get an equal say in the choice of leader.

Each riding is allocated 100 points, and the winner is determined by who gets the most points.

How many memberships each campaign sold is not as important as where they were sold to make up the just under 270,000 people who are eligible to vote.

That one ballot MacKay's team drove an hour to pick up? It could make all the difference.

There are other divisions the new leader will have to contend with, observers say.

Feathers are still ruffled in some circles by an effort to oust Sloan from caucus over remarks he made about the chief public health officer. O'Toole's repeated attacks on MacKay have also left a bad taste in many people's mouths.

Most MPs say they'll unite behind the new leader inside the caucus room.

"There is an acceptance speech to deliver which must reach out to the defeated candidates and to the many, varied factions or sections within the party," longtime conservative strategist Bruce Carson wrote recently.

"As MacKay knows well, and perhaps O'Toole as well, one can never take cohesion and unity of the party for granted. It needs constant and continuous attention and nurturing."

If the grassroots still don't feel assuaged come Sunday, someone else may already be waiting in the wings.

On Monday, former Conservative leadership candidate Maxime Bernier, who placed second in 2017 and then quit to form his own splinter party, is ready to address them in a scheduled press conference.