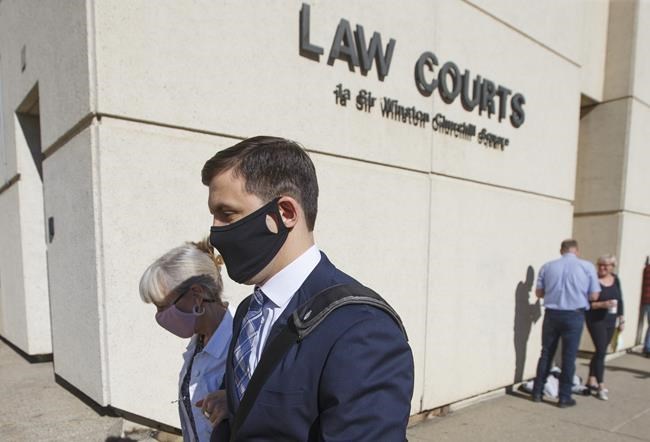 EDMONTON — The lawyer representing a former Edmonton nightclub employee convicted of sexual assaulting five women says his client "simply went too far" and should serve between five and nine years in prison.

Matthew McKnight, 33, was accused of sexually assaulting 13 women ranging in age from 17 to 22 between 2010 and 2016. He pleaded not guilty, but a jury convicted him on five counts.

His defence lawyer, Dino Bottos, made his recommendation Friday to Justice Doreen Sulyma at the Court of Queen's Bench in Edmonton on the fifth day of McKnight's sentencing hearing.

"I've never been involved in a case where the Crown and the defence have been so apart," Bottos told the court.

"The Crown submits 22 1/2 years with little to no reduction for mitigating factors is appropriate. I am suggesting ... the sentence should be between five and nine years."

Court has heard McKnight met most of the women in bars and assaulted them at his apartment.

Several victims told court last week that they have had nightmares, thoughts of suicide and anxiety since they were attacked. Some of their family members also gave victim impact statements.

Crown prosecutor Mark Huyser-Wierenga has argued that alcohol and "something else" were used in at least three of the offences, what he dubbed "drug-facilitated" sexual assaults.

Bottos said there wasn't enough evidence to say that the women were drugged.

"There is no merit to this argument and it was not proven by a reasonable doubt," he said Friday.

Alcohol was involved, Bottos said, but he argued it wasn't used by McKnight in a premeditated attempt to sexually assault the women.

"Isn't it far more likely .. that Mr. McKnight engaged in this lifestyle — a businessman, a bar promoter — which included buying a lot of people drinks?" Bottos suggested to the judge.

He said the lifestyle included inviting women who he was interested in back to his apartment.

"He slept with 200 to 300 women over six years," said Bottos. "That included eight women that he was found not guilty of sexually assaulting.

Bottos suggested McKnight didn't get proper consent from the women.

"That does not mean he was predatory, purposeful."

Bottos said a different argument could be made if the Crown had proven all 13 cases or if the five had happened closer together rather than over a period of six years.

He suggested a sentence between 18 months and four years for each of the five counts, depending on what the judge accepts as evidence in each circumstance.

Crown prosecutors have recommended consecutive sentences, which would be served one after another, because each of the five offences was separate. They asked for two terms of four years, one of 4 1/2 years and two at five years — for a total of 22 1/2 years.

Bottos said he has looked at cases of offenders sentenced to more than 20 years.

"The Crown's position is that Mr. McKnight's overall culpability is so heinous that he's worse than a killer," he said.

"The Crown's position is ... wrong under the circumstances," he said.

Bottos said the court should consider his client's lack of a criminal record and evidence he was assaulted in the remand centre.

The hearing is set to continue Thursday.

This report by The Canadian Press was first published July 17, 2020