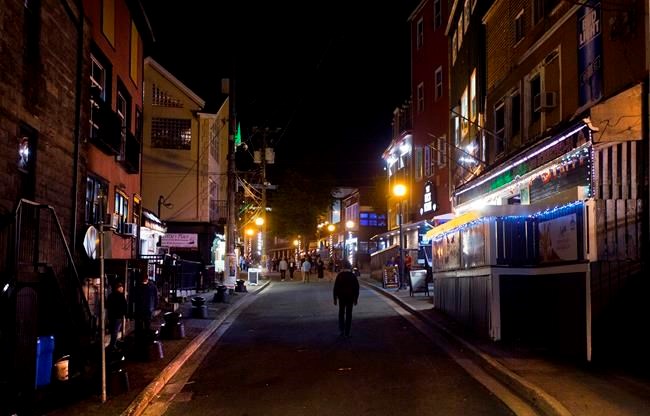 The many bars, pubs and nightclubs on George Street closed their dance floors and kept doors open to circulate air. Masked bouncers performed head counts on the mostly young patrons in line.

Neil Rajan, 20, was lined up outside the Rob Roy for a night out with his girlfriend.

Rajan said he's been following news on the pandemic and avoiding crowds. But George Street didn't seem too packed on Saturday, he said, adding he felt reassured by Newfoundland and Labrador's low COVID-19 infection numbers — just one known active case at the time.

"I'm a bit afraid, but I'm taking the risk," Rajan said. "I'm weighing the pros over the cons, and at the end I'm just saying, I just want to go out."

Atlantic Canada is ahead of much of the country in lifting pandemic-related restrictions on businesses, after beating back the first major wave of COVID-19 by early summer.

But as bars in more populous provinces with higher case numbers such as Quebec and Ontario begin to welcome patrons again, outbreaks among young people have stoked fears the venues are opening too soon.

Dr. Howard Njoo, Canada's deputy public health officer, said Friday there is "cause for concern" about the rising number of cases linked to bars and nightclubs, especially among young people. He called on Canadians to get creative while maintaining their social lives.

"Singing, mingling and dancing in close contact with others in closed spaces, in crowded places, is not the way to party this summer," Njoo said in Ottawa.

Experts maintain that opening bars is risky, but they also recognize Canada has managed to control the pandemic within its borders. The summer, they say, presents an opportunity for authorities to offer people social relief in a controlled setting.

Dr. Isaac Bogoch, an infectious diseases expert at Toronto General Hospital and associate professor of medicine at the University of Toronto, said he's not surprised by outbreaks in bars.

Like any indoor space where people gather for hours at a time, he said bars are sites where infections can spread rapidly.

"Alcohol is consumed and people get disinhibited," Bogoch said. "And I think it's just much less likely for people to adhere to physical distancing measures in those settings."

COVID-19 outbreaks in bars have occurred around the world and at home.

Outbreaks have been linked to strip clubs and private parties in British Columbia. While in Montreal, people lined up for hours outside clinics this week after public health officials advised anyone who went to a bar since July 1 to get tested — leading to 30 positive cases linked to drinking venues.

Bogoch said he hopes the Montreal scenario serves as a "wake up call" for young, healthy Canadians to remember how the pandemic affects their communities, and to keep in mind measures such as hand washing, physical distancing and mask-wearing.

At the same time, he said, people in their 20s and 30s will inevitably gather over the course of the pandemic, whether bars are open or not, especially after months of struggling through an emotionally difficult period.

"People are starving for social interaction, and they're seeking it out," Bogoch said. "Rather than shaming and blaming, I think we should look at ways that we can accommodate doing this in a safer manner."

Bogoch suggested bars could hand out masks and set up sanitizer stations, or add outdoor seating to reduce the overall likelihood of spread.

He also noted it's potentially easier to conduct contact tracing at bars following an outbreak as opposed to after a private house party.

Colin Furness, an epidemiologist and assistant professor at the Faculty of Information and Dalla Lana School of Public Health at the University of Toronto, said people have a tendency to attenuate or downplay risks as a way to cope with threats like COVID-19.

He said it's not surprising young people would construct narratives to justify going out after months of feeling locked up and hearing messages about how their age group experiences less severe symptoms.

"Your sense of self is ... at that age is very much bound up in your social relationships with others, and so to be kneecapped by COVID for that age group I think is really brutal, genuinely harmful," Furness said.

Like Bogoch, Furness said governments can take advantage of a period of low community spread by changing rules to make it easier — and safer — for young people to socialize, such as relaxing laws on outdoor drinking.

Unlike the United States and Italy, where greater distrust in government poses its own public health challenges, Furness said Canadians are generally more compliant.

Governments in Canada, he said, should be careful but creative while reopening businesses in a way that accommodates people's social needs.

"There's room for creativity," he said. "In terms of saying, instead of trying to prevent this, how can we channel it in a way that's less dangerous."

This report by The Canadian Press was first published July 18, 2020.