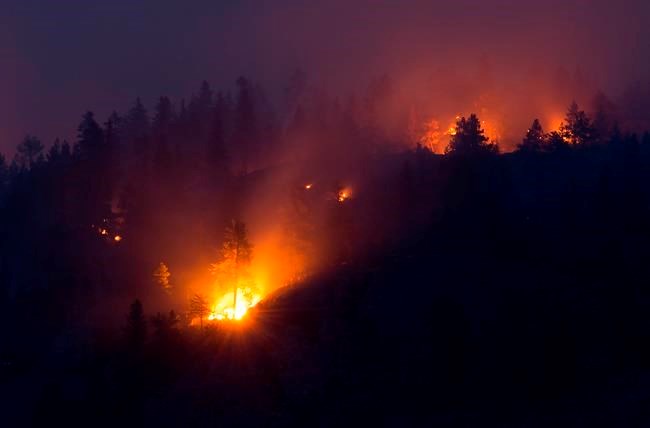 Calm winds over the past few days were forecast to switch direction and gain strength over the 20-square-kilometre wildfire that had already destroyed one home and prompted an evacuation order affecting hundreds.

"The wind and weather are major concerns, they do affect fire behaviour and activity quite intensely," said Taylor MacDonald, a fire information officer with the wildfire service.

The service said there were 132 firefighters battling the blaze, assisted by 15 helicopters and other crews.

Sixty more firefighters and one helicopter were expected to arrive to battle the fire on Saturday.

The BC Wildfire Service said it was increasing the number of teams capable of setting up sprinkler systems to protect more of the roughly 3,700 homes lying in the possible path of the fire.

Residents of those properties have been warned to be ready to leave and they've been urged to pre-register with emergency services so officials can prepare for them.

Part of the plan is to use the sprinkler systems to create a humidity bubble, which could stop embers from travelling and starting blazes, Penticton fire Chief Larry Watkinson said.

Penticton Mayor John Vassilaki urged residents to not obstruct fire crews or trucks operating in the city and to co-operate with requests from first responders.

"Now is not the time for looky-loos to be out in the community or stopping their cars to look at the fire," he said.

The amount of smoke from the blaze led Environment Canada to issue an air-quality warning on Friday afternoon.

"I could see (the fire) coming closer and closer to the homes and to the home where I live," said Ron Obirek, who was ordered to leave his home in the Heritage Hills neighbourhood earlier this week. "I've never gone through that before and it's an absolutely horrific, sick feeling."

Obirek said the strength of the winds on Friday was particularly concerning.

"This is bad. Short story: bad," he said. "We don't normally have wind like we've seen this afternoon."

In southeastern B.C., a four-square-kilometre wildfire burning west of Canal Flats had exploded to 30 square kilometres in size, but it was not immediately threatening more properties, with 10 remaining on evacuation order.

And residents of a development on Lillooet Lake, north of Vancouver, have been ordered out because heavy rain, coupled with a wildfire on the steep hills above their properties, has the potential to cause a damaging debris flow or cut the only road to the area.

The evacuation order from the Squamish-Lillooet Regional District says there is an "imminent risk" that burned trees and other debris could sweep down McCullock Creek or Catiline Creek just east of Pemberton.

Downpours affecting the Pemberton area were also forecast to drench much of B.C.'s lower south coast, with a heavy downpour warning for Metro Vancouver.

Environment Canada has also issued severe thunderstorm watches for central and northeastern sections of the province.

Strong wind gusts, large hail and heavy rain were in the forecast, with the storm also expected to pack lightning.

However, the wildfire service website showed the risk of forest fires through the Cariboo, Prince George, Stuart-Nechako and Peace River areas was ranked no higher than moderate.

— By Nick Wells and Beth Leighton in Vancouver.

This report by The Canadian Press was first published Aug. 21, 2020

COVID-19 cases in Canada remain on troubling course, Tam says, amid rising numbers
Nov 28, 2020 8:18 PM
The latest news on COVID-19 developments in Canada
Nov 28, 2020 6:46 PM
Paramedics, police treat seven people who overdose at party in Vancouver's West End
Nov 28, 2020 6:31 PM
Comments
We welcome your feedback and encourage you to share your thoughts. We ask that you be respectful of others and their points of view, refrain from personal attacks and stay on topic. To learn about our commenting policies and how we moderate, please read our Community Guidelines.