OTTAWA — It's time for Canada to have a "reckoning" about the RCMP, says the chair of a House of Commons committee that studied systemic racism in policing.
Jun 17, 2021 5:34 PM By: Canadian Press 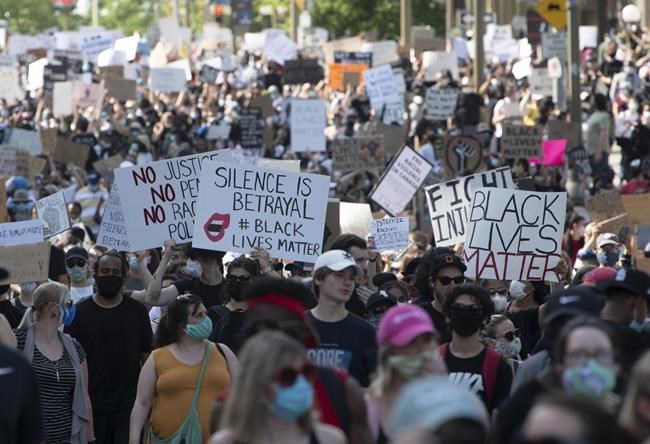 OTTAWA — It's time for Canada to have a "reckoning" about the RCMP, says the chair of a House of Commons committee that studied systemic racism in policing.

John McKay, a Toronto Liberal MP and chair of the House public safety committee, said the Mounties are a globally known Canadian icon, but it's time to acknowledge the RCMP's "quasi-military" existence is not working for all Canadians.

"There is a season and a time for a reckoning for every country and its institutions," McKay said at a news conference Thursday.

"This in my judgment is a time for Canada to have a reckoning with itself and with its premier institutions."

The public safety committee began the study of systemic racism in policing in June 2020, after weeks of protests in Canada and the United States following the murder of George Floyd under the knee of a Minneapolis police officer.

Floyd's death also turned a spotlight on racism and police in Canada. Jack Harris, the NDP public safety critic, moved a motion to study systemic racism in policing on June 23, 2020, and the committee agreed. The report was issued Thursday, based on 19 meetings, testimony from 53 witnesses and more than a dozen written briefs.

The report says MPs on the committee can conclude only that "systemic racism in policing in Canada is a real and pressing problem to be urgently addressed."

But the MPs also admit that this report is just the latest in a long list of studies and reviews that concluded the same thing, none of which led to much change.

Harris said Thursday "it is more clear than ever before that the RCMP needs transformational change" but is worried because he says the Liberal government under Prime Minister Justin Trudeau "has a history of failing to act on reports."

"The time is now to take serious and concrete action. The RCMP needs to move away from the paramilitary colonial model to a police service model with strong civilian oversight.”

The committee also calls for mandatory data collection on excessive use of force, better training on de-escalation and responding to people in a mental health crisis, more diversity in police forces and oversight bodies, and better funding for Indigenous police forces, including in urban areas with large Indigenous populations.

The MPs also want better parameters for when force is permitted to be used by police, and "serious consequences" for RCMP officers who use force excessively.

The Conservatives, in a supplementary report, urged more work on that front, saying it is not clear from the witnesses whether the problem is in guidelines for use of force, or a lack of training and enforcement regarding those guidelines.

The committee has requested that the government provide a "comprehensive response" to the report.

Moya Teklu, executive director and general counsel at the Black Legal Action Centre in Toronto, said the "most promising" recommendations in the report are decriminalizing simple possession of drugs, offering pardons to people previously convicted of simple possession, and ensuring police discretion to offer alternatives to the courts be used equitably for Black and other racialized youths.

She is less enthusiastic about the impact of more training and oversight for the RCMP, saying there isn't much evidence they'll help.

"Demilitarization is an important step," she said. "But only if it also means spending less money on policing."

Teklu said the report's findings are not new for Black and Indigenous communities.

"An acknowledgment of the existence and reality of systemic racism at different levels of government is important," she said. "A reduction in the Black and Indigenous prison populations, and a reduction in the number of Black and Indigenous people that are stopped, questioned, surveilled, arrested, beaten and murdered by police is more important. That is the real change we want to see."

Quebec Liberal MP Greg Fergus, who chairs the Parliamentary Black caucus and participated in the committee's study, agreed the existence of systemic racism is not a revelation.

But he said the committee has done valuable work in listening and responding to multiple witnesses who were able to speak about the issue in depth.

"What's also new is that there's a road map now, because of this report, this unanimous report of parliamentarians from all walks of life," he said. They have laid out a very clear process forward to make the changes, "not only in the RCMP but in police services across the country which can be inspired by this."

This report by The Canadian Press was first published June 17, 2021.