Quebec's stabilizing rate of COVID-19 cases a cause for 'restrained optimism': expert 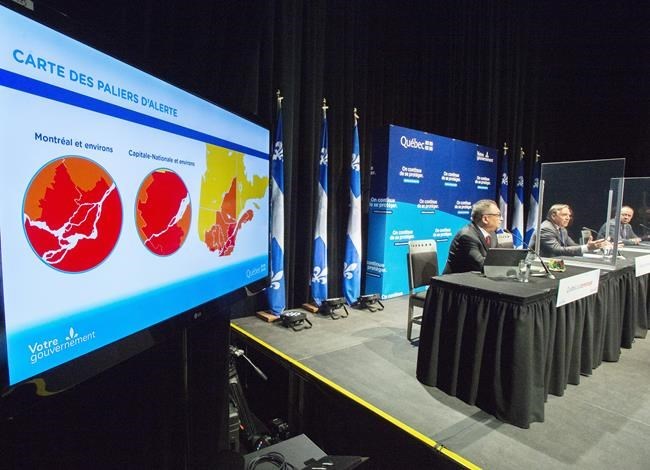 The fact the daily case numbers haven't continued to rise is "justification for a little bit of restrained optimism," said Dr. Christopher Labos, a Montreal-based cardiologist with a degree in epidemiology.

He said the partial lockdown, which forced gyms, bars and other venues to close and banned indoor and outdoor gatherings, was the right move. Quebec imposed those restrictions on Montreal and Quebec City on Oct. 1, and recently announced the same for many other parts of the province.

"I really don't see that there's any other option," Labos, who has worked with McGill University's Office for Science and Society, said in an interview Wednesday.

Health officials reported 1,203 new cases Wednesday -- 844 of which were recorded during the previous 24 hours. The other 359 cases were confirmed between Oct. 10 and 12 but were previously unreported because of what the Health Department said was a "technical problem" during an update to a computer system.

Labos said it will take at least two weeks -- maybe more because of testing backlogs -- to evaluate the effect of the government's latest approach to slowing the spread of COVID-19.

But it's almost impossible, he explained, to determine what effect specific measures have had on the rate of COVID-19 infection. All of the restrictions imposed by the government worked in tandem, leaving scientists without the ability to conduct randomized trials, he said.

Anti-lockdown advocates have been rejoicing following a recent interview by British magazine The Spectator with the World Health Organization's special envoy on COVID-19, Dr. David Nabarro.

During the interview, which made headlines around the world, Nabarro said the WHO doesn't advocate for lockdowns as a primary means of controlling the virus.

Labos said he's worried those comments are being taken out of context.

At no point during that interview did Nabarro say lockdowns don't work, Labos said. Lockdowns wouldn't be necessary, Labos explained, if Quebec had an adequate contact tracing program and every positive case could be identified and isolated.

"A lockdown becomes necessary when you have uncontrolled explosive growth, which is unfortunately what we had," he said.

By keeping some services open -- such as retail businesses and manufacturing -- she said the government is trying to find a balance between protecting the health-care system and keeping people working. That equilibrium, she said, "is very hard to find."

The fact a computer issue reportedly delayed the reporting of some positive tests is "one more reason" it's too early to say whether the restrictions in Montreal and Quebec City have been effective, Borges Da Silva said.

Other data is also important, she said. "Hospitalizations are the most reliable indicator."

Health authorities Wednesday reported one death linked to the novel coronavirus in the past 24 hours and five COVID-19 deaths from earlier dates, for a total of 5,976. Hospitalizations increased by 20 to 488, with 80 patients in intensive care, a decrease of five.

“If we want to maintain trust between the public and the government, public health has to provide information,” Plamondon told reporters. “We have to be able to know what the recommendations are and, ultimately, separate the politics from the science.”

COVID-19 Resources Canada, a national group of researchers, has also called for the Quebec government to share more information about what advice it’s receiving from public health officials. The group says other provincial governments are more forthcoming with that kind of information.

This report by The Canadian Press was first published Oct. 14, 2020.

This story was produced with the financial assistance of the Facebook and Canadian Press News Fellowship.

Inquiry into oil and gas foes to deliver report next year: Kenney
Oct 24, 2020 6:30 PM
Polling-station workers await voters after many cast early ballots during pandemic
Oct 24, 2020 6:15 PM
Chief of Neskantaga First Nation scales up evacuation amid tainted water crisis
Oct 24, 2020 5:50 PM
Comments
We welcome your feedback and encourage you to share your thoughts. We ask that you be respectful of others and their points of view, refrain from personal attacks and stay on topic. To learn about our commenting policies and how we moderate, please read our Community Guidelines.