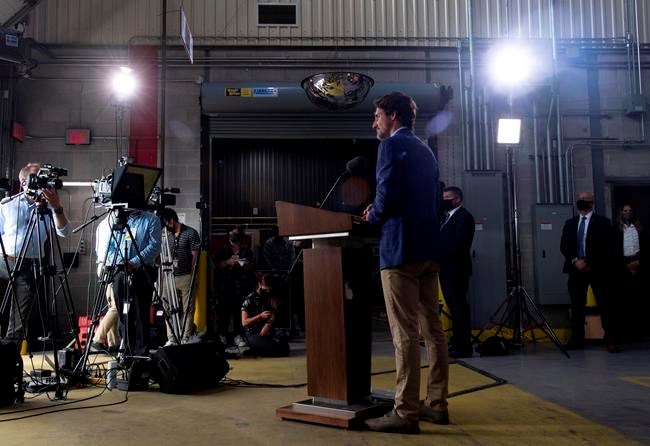 OTTAWA — Prime Minister Justin Trudeau is defending his choice to shut down Parliament shortly before unveiling a $37-billion plan to replace a key emergency aid benefit.

Ottawa announced new measures Thursday to support Canadians who have lost income or employment due to the COVID-19 pandemic — or need to stay off work for illness or caregiving — as the Canada Emergency Response Benefit winds down.

That includes benefits that must be introduced in legislation — something that cannot happen until Parliament resumes late next month.

Speaking in Brockville, Ont., on Friday, Trudeau said his government wanted to take the time to get this plan right and argued that a new direction by the Liberal minority government needs to be supported by a confidence vote.

But he also said opposition parties will have the opportunity to voice any disagreement with the proposed income-support measures through debate in the House of Commons when MPs return to Ottawa in late September.

"I think Canadians can be confident when they look across party lines that everyone seems serious about supporting Canadians. There's different approaches on how to do it, different perspectives on how much to do, but I think Canadians have seen from us that we will always be there for Canadians, we will have your backs, we will be there to support, whatever it takes," he said.

"Other parties might not believe that, might not agree with that and I'm sure there will be important debates around that and I encourage those and welcome them."

The new support measures announced Thursday outline what the Liberals intend for the four million workers currently receiving the $500-a-week CERB, which is set to wind down starting next month.

The CERB will be extended another four weeks, and a new benefit that pays $400 a week for up to 26 weeks will replace it for those ineligible for employment insurance, such as contract, self-employed and "gig" economy workers.

Anyone eligible for EI will get the same minimum for at least 26 weeks but will need reduced weeks of work to qualify, since many have found employment difficult to find during the pandemic.

There will also be $500-a-week sickness benefit and caregiving benefit. Changes are also coming to allow people to keep more of their benefits while they're working.

Conservative MPs Pierre Poilievre and Dan Albas said they believe it's unacceptable the proposal was announced after Trudeau prorogued Parliament.

"Canadians have serious questions about this transition and how it will affect them. They deserve transparency and clear answers," they said in a joint statement.

With Parliament set resume Sept. 23 with a speech from the throne, this leaves only a few days for legislative debate before the CERB expires, placing pressure on opposition parties to pass the legislation needed to ensure some of these new measures are adopted.

On Thursday, Deputy Prime Minister Chrystia Freeland dismissed suggestions the government is forcing opposition parties get on side with government quickly, lest Canadians be left without benefits.

She argued that giving all members of Parliament the right to vote on whether they support the measures is the "democratic approach."

"If the other parties disagree with extending the CERB or getting people on EI, they need to say that," he said.

"There is no question that if we are to set off on this bold new direction for our country, we need to check in with Parliament, that's part of our democracy and I think that's what Canadians expect."

Trudeau was also asked about details contained in thousands of pages of documents about the WE Charity affair released by the Liberal government earlier this week.

In one April 20 email, assistant deputy minister for finance Michelle Kovacevic makes reference to the Prime Minister's Office "weighing in" on the proposed student volunteer program, which also mentioned "positive communication with WE to be a partner," although she also added no agreement had yet been made.

Trudeau said Friday he stood by his earlier statement that he only learned that WE Charity had been chosen by the public service to run the Canada Student Service Grant program on May 8, and that he pushed back on the idea knowing his own and his family's ties to the organization would come under scrutiny.

Trudeau and Bill Morneau, who resigned as finance minister Monday, are being investigated by the federal ethics commissioner for not recusing themselves from the decision to award the contract to WE, despite their close family ties to the organization. Both have apologized.

WE backed out of the deal in early July, citing the controversy surrounding the program.