After an up-and-down season, Toronto FC looks to be a tough out in the playoffs

TORONTO — The MLS playoffs are proving to be just as eventful as an up-and-down regular season for Toronto FC. Toronto conceded a stoppage-time equalizer against D.C.
0
Oct 20, 2019 1:04 PM By: Canadian Press 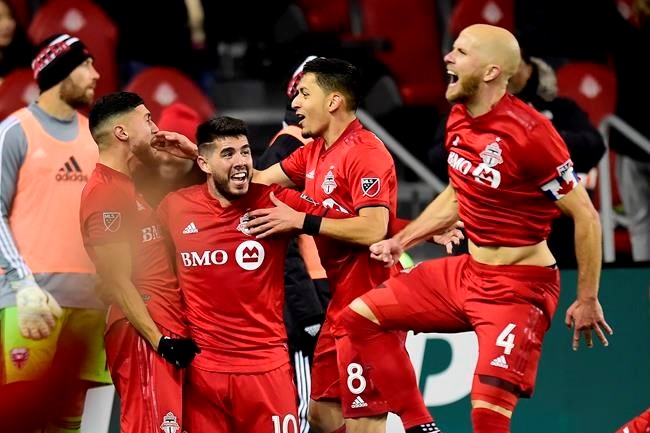 TORONTO — The MLS playoffs are proving to be just as eventful as an up-and-down regular season for Toronto FC.

Toronto conceded a stoppage-time equalizer against D.C. United before picking itself and going on an extra-time scoring spree in a wild 5-1 first-round post-season win Saturday. And TFC did it without a pair of key players as striker Jozy Altidore (quad) and influential centre back Omar Gonzalez (hamstring) were both unavailable.

Toronto showed its character in answering the challenge Saturday with an MLS-record four goals in extra time (in the 93rd, 95th, 103rd and 105th minute) Now unbeaten in its last 11 league outings (5-0-6), TFC is proving to be a difficult out.

"On our best days, the mentality in this group has been so strong," said captain Michael Bradley. "Our ability when those lights come on, when they come on brightest, to have a group of guys who aren't scared and go after things and play and complete and leave everything they have on the field — I'm so proud of that."

Now Toronto has to do it again Wednesday against a well-rested New York City FC, which watched the first round courtesy of a bye as Eastern Conference leader.

"Look, we've not done anything yet. Nothing. And everybody knows that," said Bradley, his feet firmly on the ground. "We're excited, we're proud, happy to be able to give the fans a night like this to start things off in the playoffs.

"But now we've got to get ready to go to New York City on Wednesday and understand what a difficult game that's going to be and be ready to go after that again."

NYCFC finished 14 points ahead of Toronto during the regular season. Toronto won 4-0 at BMO Field on March 29 with Spanish playmaker Alejandro Pozuelo dazzling with two goals and an assist in his MLS debut. The teams tied 1-1 at Yankee Stadium on Sept. 11 with Pozuelo missing a late penalty.

Because of the Yankees' playoff run, the game will take place at the Mets' Citi Field.

While NYCFC had the third-best home record this season at 11-1-5 in the tight confines of Yankee Stadium, it remains to be seen if it holds the edge at Citi Field.

While Toronto coach Greg Vanney suggested Gonzalez might be back mid-week, the extent of Altidore's possible participation remains up in the air. The team is also awaiting word on centre back Chris Mavinga, who limped out of the stadium Saturday.

"There's still a best version of us that we're still striving for," said Vanney. "And that requires everybody to be healthy and ready to go."

Toronto was reactive rather than proactive in the game's opening minutes Saturday but gradually found its rhythm with Pozuelo providing the creativity and Jonathan Osorio and Nicolas Benezet beginning to connect with teammates.

Playing up front in the absence of Altidore, Pozuelo flourished. The bigger his canvas the better. The Spaniard is a facilitator who sees possibilities the way a world champion snooker player thinks several moves ahead.

Give him space and Pozuelo will do the job himself. Or set the table in trying.

Toronto went ahead 1-0 on the 32nd minute when goalkeeper Bill Hamid spilled a dipping Pozuelo shot from outside the penalty box. The rebound went to Marky Delgado, who beat Steven Birnbaum to the ball to tuck it in.

Pozuelo's shot followed a 10-pass sequence, with Toronto working the ball in and out. Hamid had been handcuffed by an earlier Pozuelo shot that bounced just before it came to him and the Spaniard served up more of the same on the opening goal.

Toronto seemed to have secured the victory in regulation time, only to give away a corner when goalkeeper Quentin Westberg failed to find touch with a header after leaving the penalty box to clear a threat.

On the ensuing Wayne Rooney corner, Birnbaum touched the ball on and Lucas Rodriguez swept in deep in stoppage time. The announced crowd of 25,331 at BMO Field was silenced as if someone had turned off a switch. But Toronto regrouped with Pozuelo again prominent.

His corner produced Toronto's third goal after Drew Moor headed it back in front of goal for Osorio to knock in.

Then after scanning the eight D.C. players and three TFC teammates in the penalty box, Pozuelo spotted an unmarked Osorio _ his hand up signalling he wanted the ball _ steaming towards goal and the Canadian midfielder hammered a volley from just inside the penalty box for a 4-1 lead.

Toronto has endured a lot just getting here in what was seen as a bounce-back year after the disappointing 10-18-6 campaign in 2018.

TFC lost a large chunk of its offence in the pre-season when star striker Sebastian Giovinco and playmaker Victor Vazquez departed for big money in Saudi Arabia and Qatar, respectively.

On the plus side, Pozuelo arrived earlier than expected. Westberg, fullback Richie Laryea and midfielder DeLeon proved to be valuable additions as the season wore on. Holdover Tsubasa Endoh found a rich vein of form.

Toronto opened the campaign with three straight wins and lost just once in its first six league outings (4-1-1). However, an eight-game winless streak (0-5-3) in May-June took the steam out of things.

Toronto began to find its rhythm after the Gold Cup and the opening of the summer transfer window with Gonzalez arriving to stiffen the defence. TFC has lost just twice in 16 games (8-2-6) since the end of the CONCACAF Championship although it has left points on the table, having to settle for ties too often.

While the team booked a place in the post-season, it needed a win over Columbus in its regular-season finale and help from other clubs to get the home-field advantage in the first round that goes to the fourth-place finisher.

That confluence proved invaluable Saturday as the fans roared Toronto on in extra time.

This report by The Canadian Press was first published Oct. 20, 2019.

Can pro sports make safe return amid pandemic? Experts say precautions needed
Jun 4, 2020 2:22 PM
Comments
We welcome your feedback and encourage you to share your thoughts. We ask that you be respectful of others and their points of view, refrain from personal attacks and stay on topic. To learn about our commenting policies and how we moderate, please read our Community Guidelines.

Get $200 in free ad credits and a GuelphToday Community HUB Profile
WE ARE OPEN!