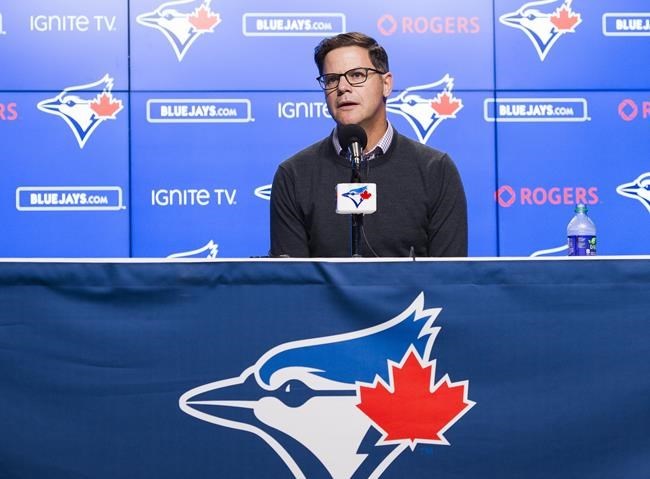 Giles has been sidelined since suffering a forearm injury Sunday. But in a videoconference Friday with reporters, Atkins appeared encouraged about the pitcher's status and recovery.

"Ultimately, never a good situation when someone's injured," he said. "But all of the scenarios that could've come out of the MRI in his visits with medical professionals and experts (were) certainly on the better end of the spectrum.

"Very optimistic that we'll see him pitching again soon. We'll have a much better understanding of his timeline in less than two weeks."

Giles entered the ninth inning of Sunday's game against the Tampa Bay Rays with Toronto leading 4-2. But the veteran right-hander surrendered a two-out double, then loaded the bases with two walks.

He went 3-and-1 to the next batter before leaving the game. Tampa Bay tied the score 4-4 in the ninth, then secured a 6-5 victory in 10 innings.

In two-thirds of an inning, Giles allowed a hit, two earned runs and walked three while registering a strikeout.

PRP therapy involves the injecting of a person's own platelets to accelerate the healing of injured tendons, ligaments, muscles and joints.

"We're confident that we can get past that within this very short season and we’ll see him again soon," Atkins said.

Giles registered 23 of Toronto's 33 saves last season with Toronto, but did miss time with elbow issues.

Atkins also had some good news about outfielder Randal Grichuk. He missed Toronto's four most recent games against the Washington Nationals with a lower-back injury.

Atkins said Grichuk will be ready to go Tuesday when Toronto (3-4) opens its next series in Atlanta against the Braves.

Atkins said Grichuk would've been able to play this weekend if Toronto had games. But the Jays are off after their series with the Philadelphia Phillies was postponed due to a pair of positive novel coronavirus tests.

Atkins said the expectation is the Jays will adjust their rotation against the Braves. The team will stay in Washington, and work out at the Nationals' stadium, this weekend.

The postponement of Toronto's series with Philadelphia due to COVID-19 is but the tip of the iceberg for Major League Baseball. Just a week into the season, a whopping 20 per cent of Friday's schedule won't be played due to the COVID-19 pandemic.

The Miami Marlins have been hit hard by the virus with 20 members — including 18 players — having tested positive. And on Friday, two St. Louis Cardinals players tested positive, resulting in the postponement of at least their series-opening game with the Milwaukee Brewers.

"We are in a pandemic, we did not expect this to be smooth and without hiccups, without bumps," Atkins said. "We all expected that there would probably be challenges, some anticipated and some not anticipated.

The Blue Jays have to try to do so on the road after the Canadian government didn't allow the team to play home games at Rogers Centre this season.

Then, the Pennsylvania government wouldn't allow Toronto to relocate to PNC Park and stage its home contests in Pittsburgh. So now, the Jays will play a majority of their home contests at Sahlen Field in Buffalo, N.Y., but the stadium wasn't ready for the team's first five home games.

"I can say that it's not easy . . . but they (players) aren't talking about it, they're not focused on it," Atkins said. "I think everyone realizes this is the situation that we're in. It's much bigger than us.

"I haven't heard one player complain. All of them have asked for clarity and would like to know as soon as we have it what the facts are, where we're headed, where we are going to be playing and they've all handled that exceptionally well."

Atkins said he's comfortable with the health-and-safety protocols the Blue Jays are following. And despite the rash of positive tests in baseball circles, Atkins said he feels safe.

"What I can tell is what I've seen done to date has made me feel as comfortable as I've been in this environment," he said. "I haven't felt or sensed a great deal of anxiety from our staff or players as it relates to that but I'd imagine that's something that's being talked about.

"I do have a great deal of trust in this industry, the executives in it, the managers of each team and the integrity of our players across the game."

This report by The Canadian Press was first published July 31, 2020

Lehner, Golden Knights shut down Blackhawks 4-1 in opener
Aug 12, 2020 2:03 AM
Point scores in 5th OT as Lightning beat Blue Jackets 3-2
Aug 12, 2020 1:42 AM
Comments
We welcome your feedback and encourage you to share your thoughts. We ask that you be respectful of others and their points of view, refrain from personal attacks and stay on topic. To learn about our commenting policies and how we moderate, please read our Community Guidelines.