OAKLAND, Calif. — Toronto Blue Jays starter Matt Shoemaker had to be helped off the field after injuring his left knee during a rundown in the third inning Saturday against the Oakland Athletics.
0
Apr 20, 2019 5:42 PM By: Canadian Press 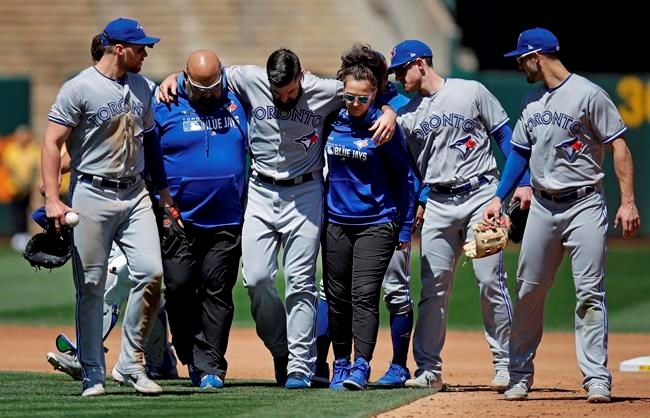 OAKLAND, Calif. — Toronto Blue Jays starter Matt Shoemaker had to be helped off the field after injuring his left knee during a rundown in the third inning Saturday against the Oakland Athletics.

Shoemaker gave up a two-out single to Matt Chapman, then bounced a pitch to Stephen Piscotty. As Chapman strayed off the bag, Toronto catcher Luke Maile threw to first baseman Rowdy Tellez. Tellez ran after Chapman and threw to second baseman Eric Sogard, who threw back to Shoemaker.

The 32-year-old pitcher chased down Chapman to apply the tag and spun around to avoid contact. As he twirled, Shoemaker appeared to injure his knee. He hopped around before falling to the ground as a team trainer rushed out. Shoemaker was down for several moments before being helped to his feet and off the field. The team later said his knee was being evaluated.

Shoemaker is off to a 3-0 start with a 1.75 ERA after missing five months of 2018 with a right forearm strain.

Als head coach Jones says he received death threats as CFL player in Winnipeg
Jun 2, 2020 6:26 PM
Former Canadian university defenceman Kodie Curran signs with Anaheim Ducks
Jun 2, 2020 6:18 PM
Comments
We welcome your feedback and encourage you to share your thoughts. We ask that you be respectful of others and their points of view, refrain from personal attacks and stay on topic. To learn about our commenting policies and how we moderate, please read our Community Guidelines.