Nam Nguyen, Alaine Chartrand and Kirsten Moore-Towers and Michael Marinaro all have bad-luck stories they'd like to rewrite at this week's world figure skating championships. Nguyen hasn't qualified for the free skate at the worlds since 2015.
0
Mar 18, 2019 11:42 AM By: Canadian Press 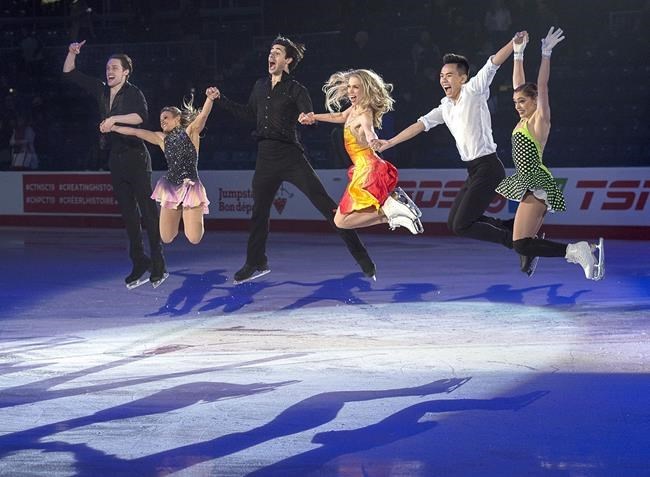 Nam Nguyen, Alaine Chartrand and Kirsten Moore-Towers and Michael Marinaro all have bad-luck stories they'd like to rewrite at this week's world figure skating championships.

Canada's team is hoping for better luck this week in Saitama, Japan.

Moore-Towers and Marinaro finished 11th in pairs at the Pyeongchang Olympics before their training was derailed by Moore-Towers' ankle injury. They still managed to finish sixth at the worlds a month later in Milan.

"Last year between Olympics and worlds, we didn't do one full program at all, so it's comforting to know that we're definitely more trained and more prepared this year," Moore-Towers said. "We feel good, we feel healthy. Competitions are difficult at the best of times, so it's nice to be able to go (with) in full confidence in your abilities and your body."

Nguyen won the world junior title in 2014 and was fifth in his senior debut in 2015. But the 20-year-old from Toronto has struggled since then with a huge growth spurt and several coaching changes, and didn't advance past the short program at the 2016 or 2018 worlds. Nguyen is also enjoying a strong season, winning the Canadian men's singles title in January.

His goals for Saitama?

"So I joke around with a lot of people when they ask me, obviously I want to make it past the short program," Nguyen said with a laugh. "But in all seriousness, putting down two solid skates and hoping for a top-10 finish is a doable goal for me ... keeping this momentum I've had so far this season, and keeping a positive mindframe. I think that's what's really important for me.

"But making it past the short program is a goal of mine too."

Chartrand was 11th at the 2015 world championships and 17th the following year, but has been hampered by injuries and so hasn't qualified for the event since. The 22-year-old from Prescott, Ont., made a major life change this season, moving to Toronto and enrolling in university, and credited the newfound balance in her life for the women's singles title she won a few weeks ago.

"(Returning to worlds) is kind of weird in a way," Chartrand said. "The beginning of the season I didn't know if I'd even be competing this year, and to have achieved a place in the world championships while going to school and doing it on my own, I'm really proud of that.

"It's all a new experience and I'm excited to be at school and I like the balance."

Gabrielle Daleman of Newmarket, Ont., who won bronze at the 2017 world championships, will be looking for a solid result after she shelved her Grand Prix season this past fall to focus on her mental health.

Ice dancers Kaitlyn Weaver and Andrew Poje are the most decorated of this Canadian team, winning silver in 2014 in Saitama and bronze in 2015 and 2018.

Weaver and Poje are competing in their first major international event of the season after skipping the Grand Prix circuit to skate in the "Thank You Canada Tour."

Weaver and Poje, who skated in the shadow of Tessa Virtue and Scott Moir for the past decade, head to worlds on the heels of winning silver at the recent Four Continents championships.

"We were more nervous for Four Continents than we have been in the past, but that was probably dictated by the fact ... it was the first time that we were putting the programs out there in that environment. Usually we have the Grand Prix season to get our feet wet," Poje said. "But we tried to ensure that we recognized and realized that and just know when we perform better is when we're in a certain mindset and a certain atmosphere that we try to create, and that's one of our goals going into world championships."

Expansion soccer team in Ottawa will be owned by Atletico de Madrid
Jan 29, 2020 3:50 PM
Comments
We welcome your feedback and encourage you to share your thoughts on this story. We ask that you be respectful of others and their points of view, refrain from personal attacks and stay on topic. To learn about our commenting policies and how we moderate, please read our Community Guidelines.

Book by February 29th and Receive 20% off all Tree Removal
Oriental and Area Rugs - Does your rug need a freshening up?