PITTSBURGH — Sean Couturier beat Matt Murray with 3 seconds remaining in overtime and the Philadelphia Flyers put together an improbable rally to edge the Pittsburgh Penguins 2-1 on Sunday night.
Mar 18, 2019 1:27 AM By: Canadian Press 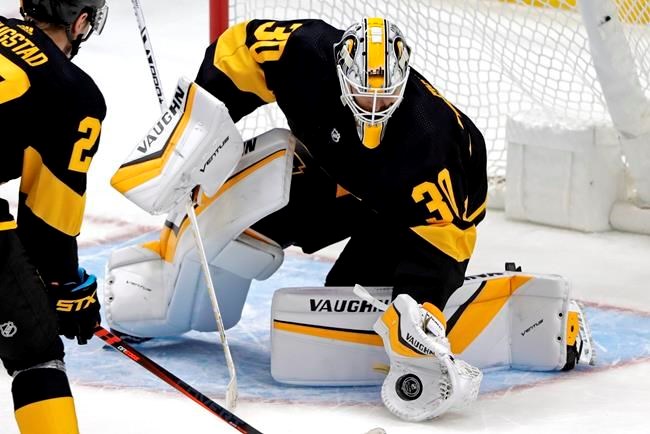 PITTSBURGH — Sean Couturier beat Matt Murray with 3 seconds remaining in overtime and the Philadelphia Flyers put together an improbable rally to edge the Pittsburgh Penguins 2-1 on Sunday night.

James van Riemsdyk tied the score with 18 seconds left in regulation when Murray's glove couldn't quite reach van Riemsdyk's wrist shot from the slot. The team traded a flurry of quality chances in the extra period before Couturier danced around Pittsburgh star Sidney Crosby on the rush then sent a shot over Murray's stick to give Philadelphia's fading playoff hopes a needed jolt.

Carter Hart finished with 41 saves for his first victory since Feb. 17.

DALLAS (AP) — Josh Leivo scored in the fourth round of the shootout to lift Vancouver.

Vancouver's Tim Schaller scored twice in the first 11 minutes for his first goals in nearly a year. It was his first career multi-goal game. Markstrom finished with 44 saves.

Jamie Benn and Taylor Fedun had the goals for Dallas. Khudobin had 25 saves and stopped a penalty shot for the second straight game. The Stars, who hold the first wild card in the Western Conference, remained two points behind third-place St. Louis in the Central Division.

ST. PAUL, Minn. (AP) — Brock Nelson scored 1:04 into overtime and New York moved into a tie atop the Metropolitan Division.

Anders Lee scored for the fourth straight game and Jordan Eberle added a goal for the Islanders, who have won five of seven. Thomas Greiss made 32 saves.

New York is tied with Washington with 91 points with 10 games remaining, but currently holds the tiebreaker with a greater scoring differential.

Zach Parise scored for the first time in 11 games for Minnesota, which pulled one point behind Arizona for the second wild card in the Western Conference. Jared Spurgeon also scored and Ryan Donato had two assists for 13 points in 13 games since being acquired from Boston on Feb. 20. Stalock finished with 17 saves.

After the Sabres' Jack Eichel and St. Louis' Tyler Bozak traded goals to open the tiebreaker, Reinhart scored on Buffalo's final attempt when he got just enough on his wrist shot to get it past Jake Allen, who got a piece of it with his glove.

Ryan O'Reilly then had a chance to extend the shootout against his former team, but his backhand chance hit the crossbar.

Pat Maroon, David Perron and Brayden Schenn scored for the Blues, who got 31 saves from Allen.

Adam Henrique and Daniel Sprong also scored for the Ducks, and Ryan Getzlaf had two assists. John Gibson stopped 37 shots. Anaheim won for the sixth time in nine games to pull nine points behind Arizona for the second wild card in the Western Conference, with five other teams in between.

Vegas, third in the Pacific Division, increased its lead over Arizona to seven points. The Oilers remained seven points behind the Coyotes for the second wild card in the Western Conference.

DENVER (AP) — Philipp Grubauer made 22 saves for his third shutout in his last five starts to lead Colorado past New Jersey.

Tyson Barrie scored twice as the Avalanche stayed in the mix for a second straight playoff appearance. Nathan MacKinnon scored his 37th goal and also had an assist to reach the 90-point mark for the second straight season.

Colorado trails Arizona by four points for the second wild card in the Western Conference with 10 games to go.

Dickerson homers as Marlins beat Cubs 5-1 in playoff opener
Sep 30, 2020 5:47 PM
Comments
We welcome your feedback and encourage you to share your thoughts. We ask that you be respectful of others and their points of view, refrain from personal attacks and stay on topic. To learn about our commenting policies and how we moderate, please read our Community Guidelines.