Crosby has no time for Subban's games in Stanley Cup Final

NASHVILLE — P.K. Subban says ask the Pittsburgh Penguins if he's getting under their skin.
Jun 5, 2017 1:47 AM By: Canadian Press 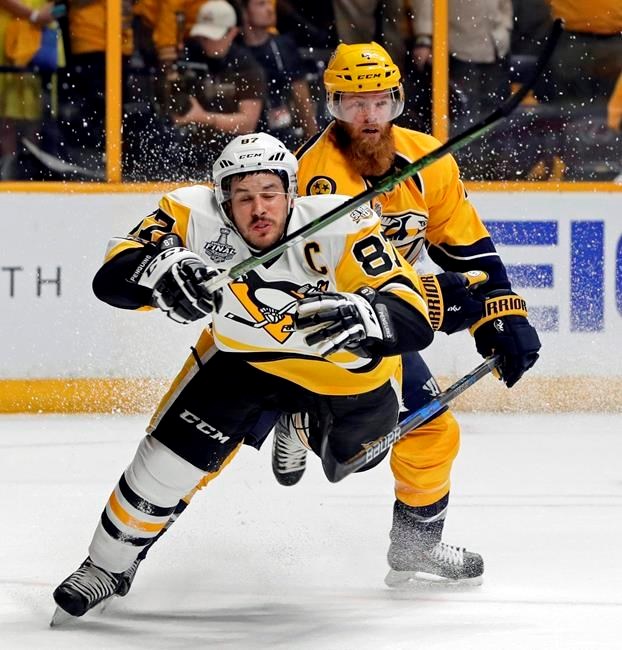 NASHVILLE — P.K. Subban says ask the Pittsburgh Penguins if he's getting under their skin. The All-Star only knows he apparently needs to work on his breath on the ice and loves the challenge of helping shut down Sidney Crosby and Evgeni Malkin.

And he loves gamesmanship.

Crosby isn't in the mood to play if it doesn't involve his stick and a puck. No, the Pittsburgh captain insists he did not complain about Subban's breath in Game 3, saying Subban made that up.

"He likes the attention and things like that so I mean if he wants to make stuff up, ... what can I do?" Crosby said Sunday.

The Stanley Cup Final has some bad blood brewing, and the best-of-seven series for the NHL championship has the makings of becoming a battle royale. The defending champs a chance for a sweep Saturday night when the Predators scored five straight goals in a 5-1 rout of the Pens, winning the first Cup Final game in the state of Tennessee.

Now the Predators want to tie it in Game 4 on Monday night. They are 8-1 at home this , and Subban made it clear he expects Nashville fans to find a way to crank the volume up even higher Monday night.

"I know there'll be a lot more energy if you can imagine that ... which will be pretty awesome," Subban said.

The Penguins have bigger issues than talk of bad breath, and their frustration bubbled over late Saturday night as they racked up 10 penalties for 44 minutes night. That included Chris Kunitz, Patric Hornqvist and Matt Cullen each getting a 10-minute misconduct all in the final five minutes of the loss.

Crosby has yet to score a goal in this series, and both he and Evgeni Malkin were held without a shot Saturday night in the same game for the first time in their star-studded careers.

Pittsburgh coach Mike Sullivan said Crosby and Malkin simply command a lot of attention, and he doesn't want to interfere with their instincts on when to pass or shoot. Sullivan did see chances for both to throw the puck at the net.

"Their numbers speak for themselves," Sullivan said. "They've produced consistently for this team all year long and throughout the course of these playoffs. There's no doubt that we believe they will continue that."

The Predators have outshot the Penguins in each game so far with Pittsburgh taking a 2-0 series lead with quick scoring bursts.

They've also smothered the NHL's best scoring team even when the Pens have the man advantage, allowing just four shots in 13 penalties killed. Pittsburgh has just one power-play goal and was 0 of 3 with the man advantage in Game 4, and Malkin said he has not had room to work.

"I have puck like one second, they jump to me," Malkin said.

The loss snapped a three-game winning streak for the Penguins, but they are 13-2 in the playoffs coming off a loss under Sullivan. Goalie Matt Murray, who allowed five goals in the span of 15 shots, also has never lost when starting a game either after a Pittsburgh loss (9-0) or a playoff loss of his own (7-0).

They also might get Nick Bonino back. He tested his injured left foot and ankle by skating Sunday but said he remains day to day.

Subban relishes playing against the man he calls the world's best player in Crosby, and he also has plenty of help from fellow Roman Josi, Ryan Ellis and Mattias Ekholm.

"It's our that's going to win us games," Subban said. "We know that, and we're going to have to continue to be strong defensively to have success against this hockey club."