CALGARY — On an emotional night in which Calgary retired Jarome Iginla's jersey, Devan Dubnyk sent the fans home unhappy. Minnesota's goaltender made 35 saves leading the Wild to a 4-2 victory on Saturday.
Mar 3, 2019 2:36 AM By: Canadian Press 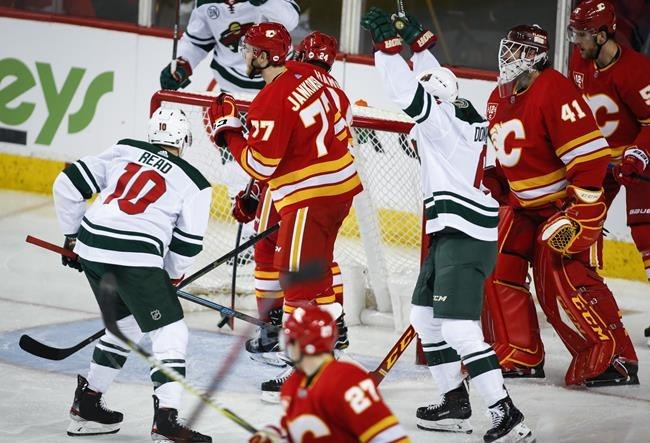 Minnesota's goaltender made 35 saves leading the Wild to a 4-2 victory on Saturday. Their fifth win in a row snapped Calgary's seven-game winning streak.

"You know they're going to come with a pretty hard push at the beginning of the game," said Dubnyk, who stopped 27-of-28 shots in the opening 40 minutes to keep it tied at 1-1. "They're a good team and they play well here. I thought we did a good job weathering it."

The Flames raised Iginla's No. 12 to the rafters in a nearly hour-long pre-game ceremony, which pushed the game's start time back 10 minutes.

"I had goose bumps for most of that ceremony," he said. "I had the privilege to play against Jarome for a few years and it was a special night to be a part of."

A much sought after ticket in Calgary since the jersey retirement was announced, the red-clad patrons in a Saddledome decorated for the night witnessed an emotional tribute that included a stirring video narrated by Lanny McDonald, who along with Mike Vernon are the other two players with their numbers retired.

Each player on both teams wore an Iginla jersey during warm-ups.

Matt Read gave the Wild the lead for good in the third period when he centred the puck and it ended up deflecting into an empty net off the skate of Calgary's Mark Jankowski, with Smith caught behind the net.

"Just a mistake behind the net with the puck," Smith said. "We battled to get back in it, but you can't make mistakes like that in close games and tonight it bit us."

It was the first goal of the season for Read, up on an emergency recall. Eric Staal, Ryan Suter and Ryan Donato also scored for Minnesota (32-27-6). Donato and Staal extended their point streaks to five games.

Calgary coach Bill Peters said his team ran out of gas in the third period.

The Wild remain in the second wild-card spot in the Western Conference, one point back of Dallas and one point up on Arizona. Calgary leads San Jose by five points atop the Pacific Division. The Wild are back in action on Sunday night when they play host to Nashville.

"The way (Dubnyk) was playing helped. I think it brought confidence to our team," said Staal.

Down 1-0 after the first period, Calgary got back to even on the only goal of the second.

Johnny Gaudreau found Monahan in front and he steered in the pass for his 30th goal. It's the third time reaching 30 goals for the 24-year-old in his sixth NHL season.

Minnesota opened the scoring at 3:17 when Staal was left all alone in the slot and he one-timed a pass from Jason Zucker.

Notes: Zach Parise (foot) didn't play for Minnesota... The Wild's opening goal ended a stretch of 430:41 for Calgary in which they had not trailed. The last time the Flames had faced a deficit was on Feb. 14... Oliver Kylington (lower body) missed his third game.

Canadian university football players' careers shortened by age rule, pandemic
Jul 9, 2020 9:54 PM
Comments
We welcome your feedback and encourage you to share your thoughts. We ask that you be respectful of others and their points of view, refrain from personal attacks and stay on topic. To learn about our commenting policies and how we moderate, please read our Community Guidelines.