MINNEAPOLIS — Teoscar Hernandez delivered a go-ahead hit for the Toronto Blue Jays for the second straight game. But it was a defensive play by Hernandez that had his manager beaming after Toronto's 6-5 win over the Minnesota Twins on Tuesday.
Apr 16, 2019 11:54 PM By: Canadian Press 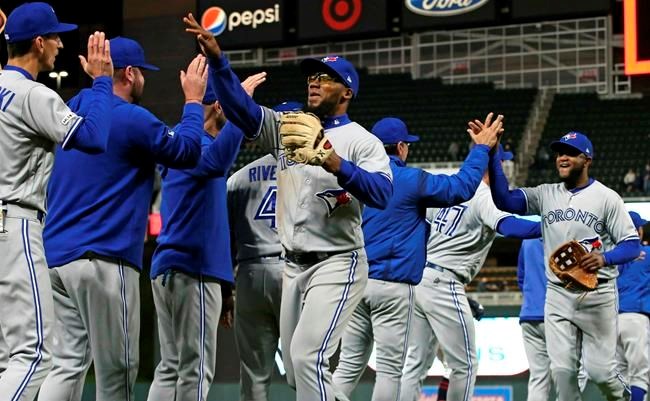 But it was a defensive play by Hernandez that had his manager beaming after Toronto's 6-5 win over the Minnesota Twins on Tuesday.

Hernandez was part of a relay that helped nab Minnesota's C.J. Cron at the plate to end the game. Hernandez fielded a double by Byron Buxton in left field and fired the ball to shortstop Freddy Galvis, who relayed to catcher Danny Jansen.

Cron's attempt to score from first was thwarted, thanks in large part to Hernandez.

"That was the perfect relay," Blue Jays manager Charlie Montoyo said. "Of course, everybody's thinking of Galvis making that throw, but to me the big one was Teoscar getting to that ball quick and making a perfect throw to Galvis."

The game-ending relay came two innings after Hernandez's big hit. Hernandez singled off Twins reliever Trevor Hildenberger in the top of the seventh to give Toronto a 6-4 lead. Hernandez had capitalized against Minnesota's bullpen a day earlier, too, hitting a three-run home run in the eighth inning that gave the Blue Jays a 5-3 win Monday.

"When you get a hit with the bases loaded to give your team the lead, it gives you more confidence going into ," Hernandez said.

Minnesota tied the game in the sixth inning on Eddie Rosario's three-run homer. But the lead was short-lived after Hernandez bested Hildenberger in the seventh.

Aaron Sanchez (2-1) allowed four runs in six innings to earn the win for Toronto. Reliever Trevor May (1-1) was charged with the loss for Minnesota.

Cron was waved around by third base coach Tony Diaz on Buxton's two-out double. A video review confirmed that Cron was indeed out to end the game.

"I was trying to just run as fast as I could," Cron said. "At the end of the day, it was just a good relay and I was out by a little bit. That's just how baseball is."

Toronto closer Ken Giles allowed a solo homer to Marwin Gonzalez in the ninth, but held on for his fifth save of the season.

Eric Sogard made his debut as Toronto's leadoff hitter one day after being called up from Triple-A Buffalo. Sogard had three hits and scored twice.

Twins starter Kyle Gibson stumbled in the sixth inning after allowing just one hit through five. The right-hander gave up four runs in the sixth, including a two-run single by Justin Smoak.

"He's a guy that can get through those innings," Twins manager Rocco Baldelli said of Gibson. "It's not a situation where we're going out there hoping."

Rosario's three-run shot in the sixth reached the second deck in right- and tied the game at 4-4. Jorge Polanco also homered for Minnesota.

Tuesday's game drew 13,365 fans, the second-fewest in Target Field history. Monday's game against Toronto had a smaller crowd, with an announced attendance of 11,727.

The Twins recalled right-handed Tyler Duffey prior to Tuesday's game and optioned left-hander Andrew Vasquez to Triple-A Rochester. Duffey appeared in 19 games for Minnesota during the 2018 season, including one start, and posted a 7.20 ERA.

Blue Jays: RHP Ryan Tepera (elbow) was going to throw prior to Tuesday's game to see how he felt, manager Charlie Montoyo said. Tepera is currently on the injured list and last pitched for Triple-A Buffalo in a rehab outing on Sunday.

Blue Jays: RHP Trent Thornton is scheduled to start Wednesday against Minnesota. Thornton is looking for his first win of the season in his fourth start. He went just three innings and allowed five runs against Tampa Bay in his most recent outing.

Twins: RHP Jake Odorizzi will look to get into the win column after going 0-2 with a 6.35 ERA through three starts. Odorizzi lasted five innings just once in three starts.