VANCOUVER — Thatcher Demko might have added a new category to the NHL's statistics. The Vancouver Canucks goaltender was asked about the 23 blocked shots his teammates made in a 3-1 win over the St. Louis Blues Monday night.
Jan 28, 2020 2:08 AM By: Canadian Press 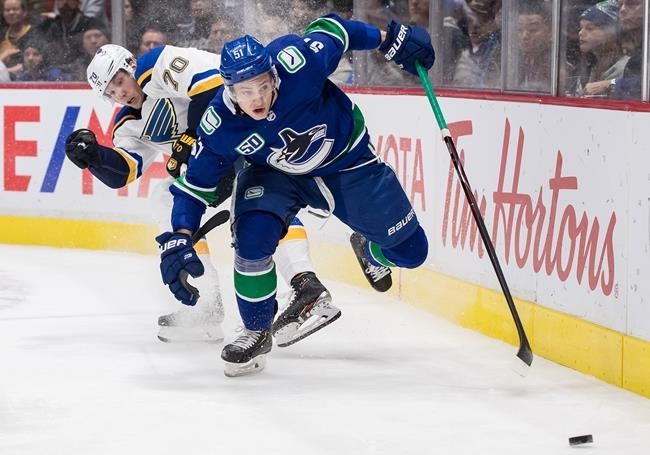 VANCOUVER — Thatcher Demko might have added a new category to the NHL's statistics.

The Vancouver Canucks goaltender was asked about the 23 blocked shots his teammates made in a 3-1 win over the St. Louis Blues Monday night.

"The amount of blocks we had were pretty crazy," said Demko. "Those are man blocks. Guys are winding up with slapshots and one-timers and guys are going down.

"Huge kudos to those guys."

Demko's 36 saves also played a big part in the win. His biggest stop came late in the third period. With Vancouver clinging to a 2-1 lead, and the Blues pushing for the tying goal, he made a huge left pad save on Jaden Schwartz.

"I saw the play was kind of developing," said Demko. "I threw my left leg over. I got a piece of it. I wasn't sure how much I got of it."

J.T. Miller scored twice in the second period as Vancouver overcame an early deficit against the defending Stanley Cup champions.

Captain Bo Horvat added an empty-net goal for the Canucks (28-18-4) who won for the 12th time in 15 games and extended their home winning streak to nine games. Jake Virtanen and Chris Tanev had two assists each.

Ten of Vancouver's blocked shots came in the third period.

"Everybody sold out," said Horvat. "Everybody was throwing their bodies in front of pucks. There were so many guys sacrificing third bodies and that's what we need going forward."

The Canucks have taken five of six points off the Blues. All three games have been close.

"This time of year is about finding ways to win," said Miller. "It says a lot about your team when you do what ever it takes, guys sliding all over the ice, blocking one-timers.

"I think it's part of our team's identity. I think that's what we need coming down the stretch."

The Canucks remain first in the Pacific Division with 60 points, three more than Edmonton, Calgary, Arizona and Vegas.

The Blues' Brayden Schenn said Demko was the difference in the third period.

"Everyone had chances, everyone was cycling, everyone put up a solid effort," he said. "We had plenty of chances and at the end of the day their goalie played good and made some saves."

St. Louis coach Craig Berube agreed Demko was good, but his team could have been better.

"We can shoot the puck a little bit better maybe and capitalize on some of our chances," he said. "We were aggressive, we were strong and had the puck most of the game.

"Sometimes it goes that way."

Miller, who the Canucks obtained in a June trade with Tampa Bay, has 48 points (19 goals, 29 assists) in 50 games this season. That's better than the 47 points, including 13 goals, he had in 75 games last year.

"I got a good opportunity here and I'm playing a lot more," he said.

Miller's first goal came after Virtanen won a puck battle along the boards. He then passed to Tanev, who fed an open Miller in the slot.

His second goal came on a pretty three-on-one. Elias Pettersson carried the puck into the St. Louis zone, slid the puck to Virtanen, who then passed to Miller. He scored from the face-off circle.

"I actually thought on the second one my stick was broken," he said. "I didn't want to push too hard and I actually fanned on it.

NOTES: The Rogers Arena crowd gave a standing ovation and players banged their sticks on the ice during a play stoppage in the first period to honour NBA star Kobe Bryant who died in a helicopter crash Sunday. … The Canucks' Antoine Roussel played in his 500th NHL game. … There were 18 scouts in attendance. … With Hughes appearing in the NHL All-Star game the Canucks become the first team in the expansion era to have a rookie in three consecutive all-star games. … Defenceman Colton Parayko returned to the St. Louis lineup after missing seven games with an upper-body injury. … The Blues announced Monday they have waived forward Troy Brouwer, who had one goal in 10 games.

This report by The Canadian Press was first published Jan. 27, 2020.