Ann-Sophie Bettez wasn't getting her hopes up. She'd heard she was back on Hockey Canada's radar for possible selection to the national women's team. But at 31, Bettez felt that window had probably closed.
0
Feb 11, 2019 10:10 AM By: Canadian Press 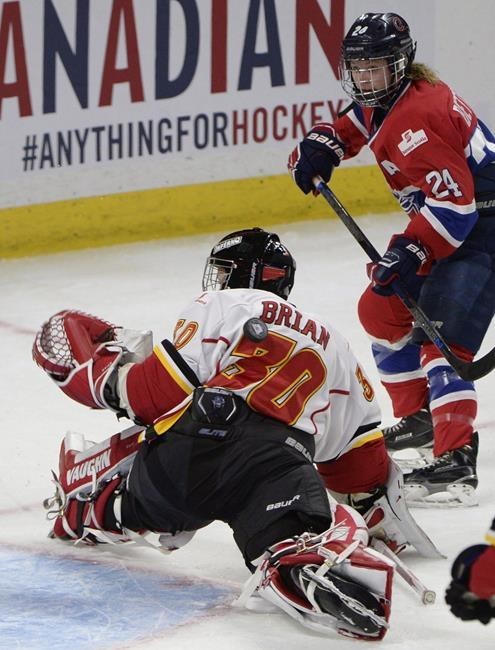 She'd heard she was back on Hockey Canada's radar for possible selection to the national women's team.

But at 31, Bettez felt that window had probably closed.

"It was 'I'll believe when it when I see it' kind of thing, you know?" Bettez said.

Then came an email informing her she was chosen to suit up for Canada in a three-games series against the United States starting Tuesday in London, Ont.

"Sometimes when you don't expect it, it's even better," Bettez told The Canadian Press.

"At any age, it's a great surprise when you get invited to be part of the national team. Whenever it happens, it's warming to the heart."

Game 2 of the "Rivalry Series" between the Canadian and American women is Thursday in Toronto followed by Game 3 in Detroit on Sunday.

There hasn't been a thirty-something rookie on the Canadian team since before the turn of the century.

The national squad's average age dropped in lockstep with advances in women's hockey and a dramatic increase in the number of girls playing it.

But one of those advances opened the door for a late bloomer like Bettez, who last wore the Maple Leaf as a McGill student playing for Canada at the 2011 world university games.

The Canadian Women's Hockey League gave the five-foot-four, 132-pound forward from Sept-Iles, Que., a stage to earn her breakthrough.

"Personally, I had a later growth," Bettez said.

"I know when I was younger, I don't think I had the confidence to play at that level."

Bettez was once in the national team's prospect pool playing for under-22 teams in 2009 and 2010.

The invitation to the next level didn't come, so Bettez joined Montreal's CWHL team and pursued a career as a financial adviser.

In her seven CWHL seasons, she's averaged more than 1.5 points per game, won the league's scoring trophy and MVP award in 2014 and claimed a Clarkson Cup in 2017.

Brianne Jenner, a national team forward since 2011, skated with Bettez in the third period of last month's CWHL all-star game in Toronto and came away impressed.

"She's been an elite player for a long time in this league," Jenner said. "Her speed is ... probably in the top three per cent."

What grabbed the attention of Hockey Canada's new director of female hockey was Bettez's continued output for Les Canadiennes, even when big-name linemates Marie-Philip Poulin and Melodie Daoust were away with the Olympic team last season.

"To me, it's a no-brainer with what she's been doing in the CWHL, dominating the leaderboard in terms of points, even when her linemates were away at the Olympics last year," said Gina Kingsbury, who was a forward on Canada's 2010 Olympic team when Bettez was last in the national program.

"She still had a huge presence in the CWHL," Kingsbury continued. "If an athlete seems to be having success even at a later age and we think they can serve us well and do well with us, by all means I think we need to give them a shot."

Canada needs goalscoring against the creative, fleet-footed Americans, who are now winning the majority of games against their archrivals.

While Daoust has been sidelined with a reported knee injury, the hope is the combo of Bettez and Canadian captain Poulin can transfer their Les Canadiennes chemistry to the international stage.

"She's so fast," Poulin said. "She plays the game at a high-speed level. Keeping up with her, it's quite hard, but it makes me better.

"The way she sees the game, the way she plays, I think her work ethic is something that makes her one of the best."

With a chance to finally play for Canada, and with April's world championship on the horizon, Bettez is looking at her hockey career through a new lens.

"It does definitely change," Bettez said. "For the next few months or years, I'm willing to put the effort in to being the best I can be. Put in the right training, take care of my body and all those things.

"It's an opportunity for me to live my dream and be part of the national team."

— Joshua Clipperton contributed to this story.

Maple Leafs sign defenceman Jake Muzzin to four-year extension
Feb 24, 2020 4:23 PM
Comments
We welcome your feedback and encourage you to share your thoughts on this story. We ask that you be respectful of others and their points of view, refrain from personal attacks and stay on topic. To learn about our commenting policies and how we moderate, please read our Community Guidelines.