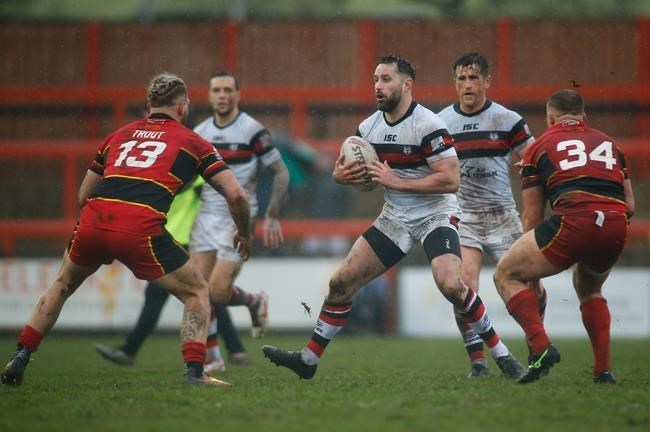 The O'Brien try was Toronto's third in a five-minute span, rescuing a nervy afternoon for the league-leading Wolfpack (5-0-0) against a stubborn Dewsbury team.

Toronto coach Brian McDermott credited the Rams for their play.

"I've got to say Dewsbury's defence was awesome. It didn't let our team create too much," he said. "And they carried the ball a bit too strong for us. (It) found us out a bit. Well no, it found us out a lot."

Trailing 17-4, Ryan Brierley — in his season debut — touched down Josh McCrone's grubber kick in the 65th minute to start the fightback. The conversion cut the margin to 17-10.

Dewsbury put the restart into touch, giving Toronto a good launching pad. And the Wolfpack made the most of it with Blake Wallace beating three defenders from in-close to get over the line in the 67th minute for a converted try that made it 17-16.

A Dale Morton handling error gave the ball back to Toronto in front of the posts and Gareth O'Brien swept over the line for the Wolfpack's first lead of the day.

"I don't mind that the opposition are good and I don't mind that we might be off a little bit. I get that ... But what we can't accept is just the attitude not being there which I didn't think it was for a long time."

A melee erupted in the 76th minute after a high tackle by Darcy Lussick, who was sent to the sin-bin on the play. Dewsbury's Chris Annakin, on loan from Wakefield, was red-carded for spitting one minute later.

Dewsbury (1-2-1) relied on a swarming defence and some powerful running on offence. Penalties and turnovers did not help the Toronto cause.

Toronto and Sheffield Eagles, who beat Batley Bulldogs 44-16 on Friday to improve to 4-0-0, are the only unbeaten teams in the division.

Michael Knowles scored a try for Dewsbury, which came into the game ninth in the standings. Paul Sykes kicked five penalties, a conversion and a drop goal.

Beswick came on in the 16th minute for his milestone. The 34-year-old Beswick has played 50 games for the Wolfpack, 123 for Leigh Centurions, 87 for Halifax, 94 for Widnes Vikings, 22 for Wigan Warriors and 24 for Ireland.

The 37-year-old Sykes opened the scoring with his boot off a Toronto penalty, making his 17th straight kick for a 2-0 lead. It marked just the second time the Wolfpack have trailed this season.

Toronto found itself under early pressure with poor field position. And another Sykes penalty made it 4-0 in the 18th minute after Anthony Mullally was called for a tackle infraction.

Dewsbury extended its lead in the 22nd minute when a sliding Knowles was judged to have got a hand to a Sykes grubber kick. The conversion made it a 10-0 lead.

The Wolfpack came into the game having conceded just three tries this season.

Toronto's Adam Sidlow and Jon Wilkin left during the first half with injury concerns.

Higson finally put Toronto on the board in the 34th minute, touching down in the corner after the Wolfpack spread the ball wide. That cut the lead to 10-4.

Dewsbury completed 18 of 19 sets in the first half compared to 13 of 19 for Toronto, which also made five handling errors.

Sykes, a former England and Great Britain international, added a penalty in the 43rd minute to extend the lead to 12-4 after Toronto was penalized for a play-the-ball infraction.

Sykes hit another penalty from in front of the posts in the 57th minute after a Mullally infraction. And he made Toronto pay again in the 61st after a McCrone tackle infraction, upping the lead to 16-4.

Sykes added a drop goal in the 64th minute.

Spring Training 2.0: Jays begin camp in Toronto ahead of 60-game season
Jul 6, 2020 7:09 PM
Comments
We welcome your feedback and encourage you to share your thoughts. We ask that you be respectful of others and their points of view, refrain from personal attacks and stay on topic. To learn about our commenting policies and how we moderate, please read our Community Guidelines.