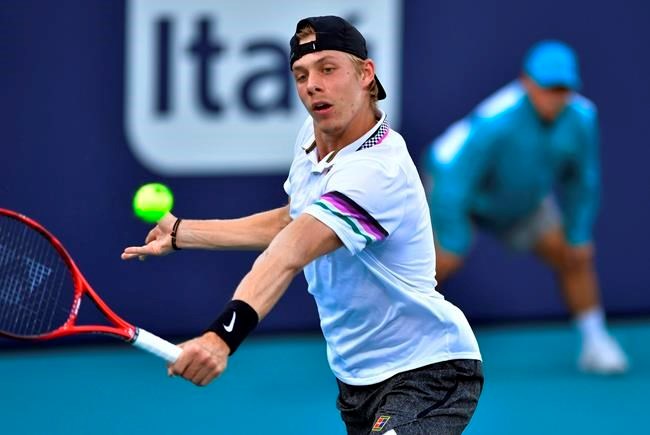 MONACO — Denis Shapovalov's clay-court campaign got off to a poor start as the Canadian lost 5-7, 6-3, 6-1 to Jan-Lennard Struff in the first round of the Monte Carlo Masters on Monday.

The 20-year-old from Richmond Hill, Ont., arrived after a good run on hard courts at the Miami Open, where he lost to Roger Federer in the semifinals.

But the Monte Carlo clay got the better of the big-hitting Canadian, seeded 15th. The unseeded German picked apart his serve, converting six of 16 break points.

Like Shapovalov, the 18-year-old Auger-Aliassime made it to the semis in Miami.

Shapovalov and Auger-Aliassime also are scheduled to play doubles together in Monte Carlo.

Struff next faces Grigor Dimitrov of Bulgaria, who lost in the semifinals to Rafael Nadal last year.

Nadal, the defending champion, starts his bid for a record-extending 12th title on Wednesday against fellow Spaniard Roberto Bautista Agut, who won 3-6, 6-1, 6-1 against John Millman on Monday.

Nadal has not played since pulling out of his semifinal against Federer at Indian Wells last month because of an injury to his right knee. Nadal said Monday he resumed practice two weeks ago and feels fit.

Top-ranked Novak Djokovic faces unseeded Philipp Kohlschreiber in the second round on Tuesday. Djokovic has won eight of their 10 matches, but Kohlschreiber recently beat him at Indian Wells.

Also on Monday, 10th-seeded Daniil Medvedev; No. 11 Marco Cecchinato; No. 13 Fabio Fognini, and No. 16 David Goffin advanced, but No. 12 Nikoloz Basilashvili went out.

Medvedev did not face a break point in a 6-1, 6-1 win against Joao Sousa. Cecchinato, a French Open semifinalist last year, was leading 4-0 when Damir Dzumhur pulled out.

Goffin won 6-1, 6-4 against qualifier Guido Andreozzi, but Fognini had a tougher match.

The hot-tempered Italian player had the crowd on his side as he rallied to a 4-6, 7-5, 6-4 win against unseeded Russian Andrey Rublev.