PARIS — Getting better and better, Andy Murray worked his way into the quarterfinals of the French Open for the fourth straight year by beating Karen Khachanov 6-3, 6-4, 6-4 on Monday.
Jun 5, 2017 10:44 AM By: Canadian Press 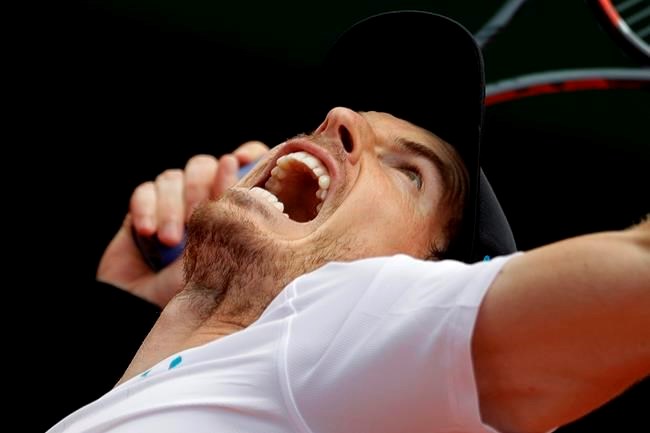 PARIS — Getting better and better, Andy Murray worked his way into the quarterfinals of the French Open for the fourth straight year by beating Karen Khachanov 6-3, 6-4, 6-4 on Monday.

"I think today was probably the best I have played overall. Each match I feel like I played better," said Murray, who lost in last year's final. "I have hit the ball cleaner and started to hit the right shots at the right moments. (I have) come a long way the last ten days or so."

Murray had never before played the unseeded Russian. The 53rd-ranked Khachanov made 38 unforced errors, compared to only 14 for Murray.

"Kei is dangerous off both wings," Murray said. "Moves well."

Earlier, third-seeded Simona Halep and fifth-seeded Elina Svitolina advanced and will face each other in the quarterfinals.

In four previous matches on clay, Halep had never been able to beat Carla Suarez Navarro. But the Romanian took care of that problem on Monday, routing Suarez Navarro 6-1, 6-1 on Court Philippe Chatrier.

"I was expecting a very tough game," said Halep, the 2014 French Open runner-up. "I managed to push her back."

The 290th-ranked Martic was leading 5-2 and 30-0 on Svitolina's serve in the deciding set. The Ukrainian managed to hold serve, however, which allowed Martic to serve for the match at 5-3.

But Svitolina, who needed treatment on her back at the start of the third set, broke and soon won on her second match point, when Martic hit a backhand into the net.

"It was amazing tennis from Petra today and she was really striking the ball well," Svitolina said. "I was really happy to come back in the second set. Thanks to the crowd for cheering me on. They gave me the energy to fight."

Leylah Annie Fernandez advances, while Denis Shapovalov eliminated at French Open
Oct 1, 2020 2:28 PM
WHL's Moose Jaw Warriors announce formal review of primary team logo
Oct 1, 2020 1:50 PM
Montreal Impact acquire striker Mason Toye from Minnesota FC
Oct 1, 2020 1:46 PM
Comments
We welcome your feedback and encourage you to share your thoughts. We ask that you be respectful of others and their points of view, refrain from personal attacks and stay on topic. To learn about our commenting policies and how we moderate, please read our Community Guidelines.