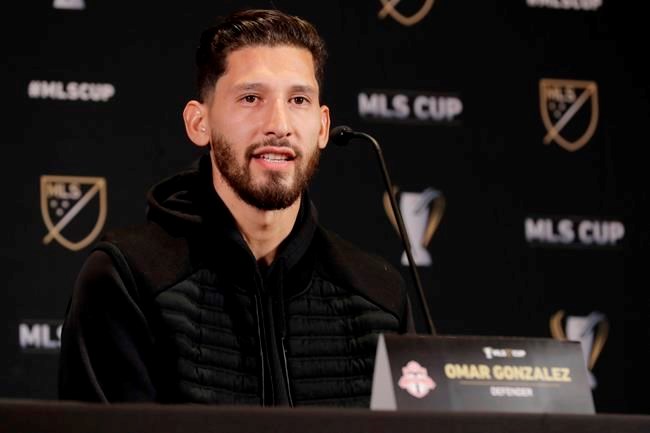 "An army marches on its stomach," Napoleon once said. And so do pro sports teams, it appears.

Toronto FC defender Omar Gonzalez, who has yet to arrive in Florida for the MLS is Back Tournament, drew a quick response from the league Tuesday after a tweet showing an apparent sample of the in-room dining that apparently awaits them at the Swan and Dolphin Hotel.

Gonzalez posted a photo of a spartan boxed lunch — a sandwich, banana and what may have been a salad in a small container — along with a one-page MLS is Back in-room dining menu.

TFC defender Eriq Zavaleta posted another photo of a basic sandwich, with a grimacing face emoji as his review.

"Nothing like a $65 sandwich to get the recovery going!! Can't wait..." tweeted Toronto goalkeeper Alex Bono.

The league says the players won't pay for such meals.

Teams have already started arriving in Florida for the tournament that runs July 8 to Aug. 11 at Disney's Wide World of Sports complex in the Orlando area. They will all be staying at the one hotel.

Referencing Gonzalez's tweet, the league said the in-room dining meal menu in question is only for the 12 hours that players, staff and other officials are in quarantine after their arrival.

Once the clubs get their COVID test results and complete quarantine, they will eat together in their team meal rooms.

The league said players also have access to four other restaurants and two other eateries including Shula's Steak House: American Seafood and Steakhouse and the rustic Italian cuisine of Il Mulino.

Toronto FC players may be spoiled when it comes to food. They rave about Elaine Flamenco, the head chef at their training centre. Flamenco and her staff provided meals for the players at home during the pandemic lockdown.

Raptors guard Fred VanVleet, who is in Fort Myers, Fla., preparing for the resumption of the NBA season in the Orlando area, also mentioned food as one of his concerns given teams could spend a long time in the NBA bubble if they go deep into the playoffs.

He said being fed by the same chefs every day, the food options will become "bland" pretty quickly.

On the plus side, the Raptors had a team barbecue recently.

The NBA season resumes July 30 with playoffs to begin in mid-August and the NBA Finals going into October.

This report by The Canadian Press was first published June 30, 2020.

Major League Soccer teams head to Florida, albeit in stop-start fashion
Jul 3, 2020 4:46 PM
Heat's Olynyk says changes in schedule could conflict with Tokyo qualifying
Jul 3, 2020 4:02 PM
Comments
We welcome your feedback and encourage you to share your thoughts. We ask that you be respectful of others and their points of view, refrain from personal attacks and stay on topic. To learn about our commenting policies and how we moderate, please read our Community Guidelines.