TORONTO — Hobbling on crutches, Wolfpack wing Liam Kay worked his way down the east stand of Lamport Stadium to mingle with fans after Toronto's weekend win over the Coventry Bears.
Jun 5, 2017 3:58 PM By: Canadian Press 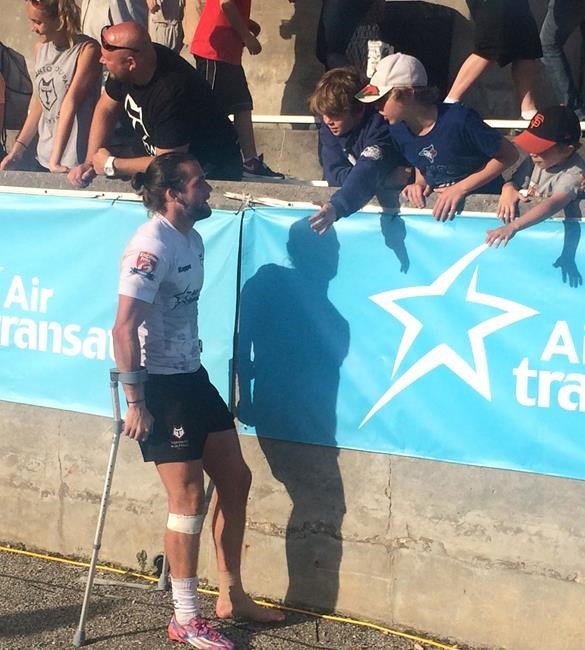 TORONTO — Hobbling on crutches, Wolfpack wing Liam Kay worked his way down the east stand of Lamport Stadium to mingle with fans after Toronto's weekend win over the Coventry Bears.

Kay injured his ankle in a three-try performance in the 54-12 victory. But the English back wasn't about to disappear into the dressing room after Saturday's final whistle.

"I'm not one to be selfish and keep my time to myself. I'll always go and thank the fans, because they've come out to watch us. The least that me and all the boys can do, despite having injuries, is go round and thank them all. We'll go over to the beer tents after and we'll spend some more time with them there and go to the Brazen Head Pub (a nearby Irish watering hole where Wolfpack fans gather) after.

"That's just what rugby league is."

Wolfpack players posed for selfies, signed autographs and gratefully took a sip of any beer that was passed their way as they worked their way around the beer tents and stands. The visiting Coventry team joined them in mingling.

The Wolfpack aren't the only sports team to bond with fans. Pro lacrosse and minor league hockey are among sports that have long made a point of making players available after games. But the Toronto rugby league team sees the interaction as an important part of its mission in introducing the sport to North America.

The Wolfpack drew an announced attendance of 7,236 Saturday, following crowds of 6,281 and 7,144 for the first two home games. Kay says those numbers are better than some of the teams in the English top tier get.

But he admits to being worried during the pre-game warmup for the May 6 home opener when he looked around and saw the stands were almost empty.

"It's quite a new game to a lot of them," he added. "Maybe some don't know the actual rules properly, I just think it's amazing they still come out and support us."

Toronto coach Paul Rowley, a former England hooker, is big on character in his squad. In assembling the Wolfpack, he said he looked for "good players and good people."

Ego is frowned upon.

While his squad has Australian, Samoan and Tongan flavours, the bulk come from the north of England.

"These lads, they're very very honest people, hard-working people," said Rowley. "And that's rugby league players in general. They're really hard-working. They have a huge amount of humility and you've see Liam walk around the pitch because it's his duty to go and shake that youngster's hand and make his day.

"And that's how you get your next generation of Toronto rugby players, because that moment will stick with that young child and he wants to play rugby and so on and so forth."

Wolfpack back Ryan Brierley gave his game shoes away to a young fan at the last home game, Rowley noted.

"He's had to go out and buy another pair of boots for the game."

"If there's a pound in their pocket, they'll give it to you," Rowley added. "We're dealing with good people."

The fully professional Wolfpack, rugby's first transatlantic team, have started in the third tier of English rugby league with an eye to winning promotion all the way to the Super League. They have made short work of their semi-pro opposition so far and that will likely continue Saturday when the Wolfpack play at the South Wales Ironmen (0-9-0).

On the injury front, Kay is expected to be out two to three weeks with a high ankle sprain. Forward Adam Sidlow (hamstring) will be out three weeks.

Toronto is really the Wolfpack's home away from home given most of the players have homes in the north of England and the team has its training base there. But players like Kay and Tom Dempsey, born in Australia to a mother from Edmonton, like what they see in Toronto.

"I can't wait to get back and I've not even seen the majority of it yet," said Kay, who was Rowley's first signing.

"Like Liam said, I honestly don't really want to go back for England for two weeks," added Dempsey. "I'd rather stay here."