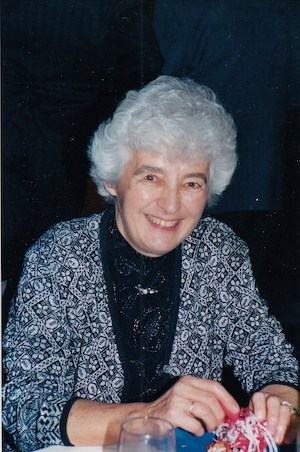 Rosemary Diamond (nee Taylor) died peacefully at Hospice Wellington, Guelph, Ontario on February 26, 2020 surrounded by family. She will be greatly missed by Michael, her loving husband of 58 years and their five daughters Catherine (Timothy), Fiona, Ruth (David), Marian (Frank) and Barbara. Loving grandmother to her thirteen grandchildren: Andrew (Melissa), Frances (Josh), Michael (Emily), Emily, Gillian, Kaitlyn, Alexander, Sarah, Justin, Thomas, Fiona, Eric and Ian. She was thrilled to welcome her first great-granddaughter Rosemary (Rosie) this past October. She will be fondly remembered by her brother Ian (Pam) Taylor and all of her family and friends in England and Canada. Rosemary was born January 23rd, 1940 to Robert and Marjorie Taylor in Sunderland, England. As a child, she regularly attended Sunderland FC matches with her father and younger brother Ian and became a lifelong Sunderland supporter. In 1959, while studying French at King's College, Newcastle-upon-Tyne, fate brought Rosemary and Michael together at the annual May Ball. This was to be the first of many twirls around many dance floors. Upon her graduation in 1961, she married Michael and together they lived in Cumbria, Yorkshire and Lancashire with their expanding family of five daughters. They made many lifelong friends along the way. In 1969, Michael and Rosemary made the huge decision to immigrate to Canada. The family lived in Brossard, Quebec until relocating to Thornhill, Ontario in 1980. Upon their retirement in 1999, Michael and Rosemary moved to the Village by the Arboretum in Guelph. Rosemary's passion was her family. They enjoyed family camping trips, cross-country skiing, celebrating family birthdays and holidays, and many memorable cottage weekends. She was very proud of all her daughters and grandchildren and always interested in how their lives were unfolding. She was Michael's biggest supporter in all his athletic and musical endeavours, including acting as support vehicle on his cross-Canada cycling trip in 1998. They also enjoyed travelling throughout Canada, Australia, New Zealand and the United States. Rosemary worked as a school secretary for many years in Brossard, Quebec and later worked at the Astronomy Library at the University of Toronto. Upon retirement, she learned to play the flute and joined various activities and clubs including the memoir writing group, square, line, tap and ballroom dancing, cycling, stained glass making, cabaret, fitness classes and golf. Never one for the limelight, Rosemary quietly volunteered at many Village by the Arboretum events, the Guelph branch of Canadian Blood Services, and the Guelph Public Library for many years. She was an avid reader and knitter. She enjoyed nothing more than a good cup of tea and watching an episode of "The Street." Rosemary will be remembered by all for her kindness, generosity, gentle unselfish nature and beautiful smile. We will miss her remarkable talent for sitting quietly at family gatherings before offering one of her well-timed witty remarks sending the room into gales of laughter. Special thanks to Dr. Nairn, Dr. Robinson, all the nurses at Bayshore Nursing - especially Sandra, and the staff and volunteers at Hospice Wellington for their wonderful care and compassion. Cremation has taken place. Friends and family will be welcomed at a Celebration of Life that will take place in Reid Hall at the Village by the Arboretum, 221 Stone Rd E, Guelph, on Saturday, March 14th, 2020 at 2 p.m. Donations to Hospice Wellington, Guelph, a hospice of your choice or the Canadian Cancer Society would be appreciated by the family. Donation cards are available at Gilbert MacIntyre and Son Funeral Home (519-821-5077).