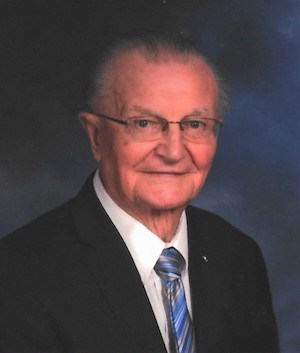 Peacefully at Guelph General Hospital surrounded by family. Leo will be
deeply missed by his beloved wife of 62 years, Deloris, who held his hand
until the end, and his children, John (Charlene) of Ottawa, David (Ingrid
Rost), Marie (Geoff) Craig, Loretta (Mark) de Sousa of North Bay, Annette
(John Burns) and Margaret, still at home. Admired and enjoyed by his
eight grandchildren, Sarah, Kyla and Alexander Craig, Elaine and Thomas de
Sousa, Galen, Pierce and Nolen Burns. Leo was the step-grandfather of 3
and step-great-grandfather of 5. Survived by his sisters, Agnes, Lucy, and
Koni and brothers, Syl and Bernard; sisters-in-law, Irene, Linda, Carolyn
and brother-in-law Bill Lalach; as well as 76 nieces and nephews most of
whom reside in Saskatchewan. Predeceased by his parents, Anthony and
Julia, his sisters, Elsie (Joseph Bodnarchuk), Mary (Herman Habetler),
Cecilia (Leo Brecht), and his brothers, Edmund (Laurie), Stanley
(Dorothy), Lawrence, Carl, Henry, Louis (Fr. Damian), as well as
brothers-in-law, Stanley Meakin and Tom Evans.

After graduating as a Mechanical Engineer from the University of
Saskatchewan in 1952, Leo began his career as a consultant in Alberta and
Saskatchewan; before moving to the University of Guelph where he worked
until he retired in 1988, after which he did private consulting for 10
years. Leo was a hard-working, family man who was always in the service of
other people and those he loved. He was a 4th Degree member of the Knights
of Columbus, volunteered for Scouts Canada, Guelph Minor Football and
supported of Hopewell Home and Sunrise Equestrian Center. Leo was a
devout, long-standing parishioner of Holy Rosary Church and served on
various committees. Leo and Deloris were always happy to open their home
to participants of Katimavik, NET, and a multitude of family and friends.

Although Leo moved away from family in the West to establish another home
in Guelph 51 years ago, he always made sure his children kept an
appreciation and love for their relations in the Prairies. He had an
enthusiasm for camping and the outdoors, along with any improvement
project that came to mind. He took great delight in his familys
accomplishments as the beloved patriarch who had a quiet and dry sense of
humour. He will be much missed and loved, but not forgotten.

Cremation has
taken place. Private inurnment at Our Lady Immaculate Mausoleum, Marymount
Cemetery, Guelph. As an expression of sympathy, donations to the Holy
Rosary Church's Capital Fund, Knights of Columbus Council 1507 or the
Canadian Cancer Society would be appreciated by the family.

Memories and Condolences
We welcome your feedback and encourage you to share your thoughts on this story. We ask that you be respectful of others and their points of view, refrain from personal attacks and stay on topic. To learn about our commenting policies and how we moderate, please read our Community Guidelines.