Guelph officer guilty of assault should be allowed to return to work, say two superiors

Two inspectors with the Guelph Police Service testified Wednesday at the sentencing hearing of Const. Corey McArthur, suspended in 2016 after assaulting a teenager
Oct 28, 2020 4:59 PM By: Kenneth Armstrong 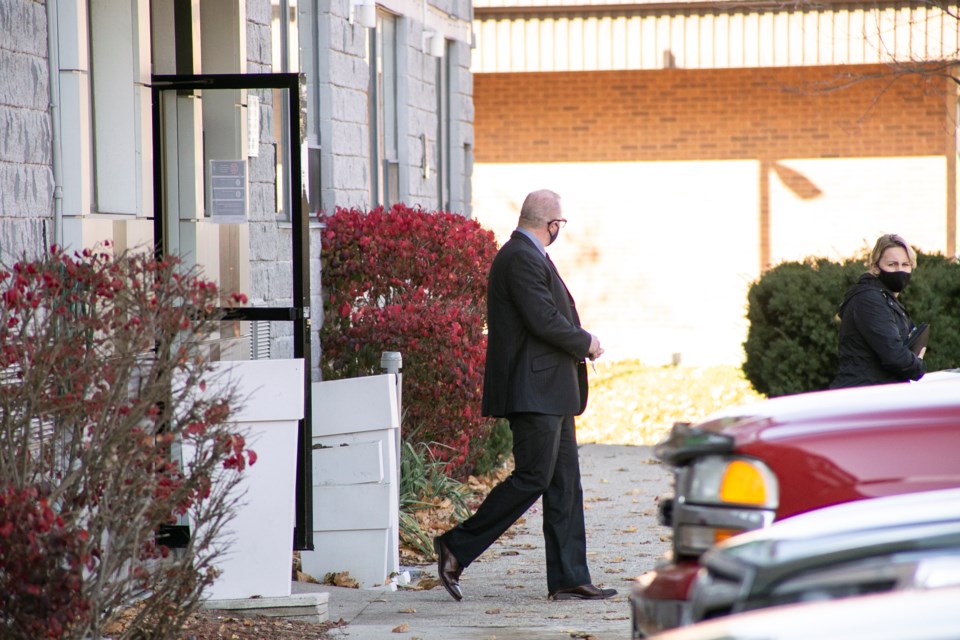 Const. Corey McArthur leaves the Holiday Inn on Scottsdale Drive Wednesday by the side door after a professional conduct hearing. The hearing will continue at a date to be determined. Kenneth Armstrong/GuelphToday

Two supervisors with the Guelph Police Service testified Wednesday that Const. Corey McArthur, who was suspended after the 2016 assault of a teenager handcuffed to a hospital bed, should be allowed to return to work.

Inspectors Scott Green and Cate Welsh both spoke in support of McArthur at his professional conduct hearing at the Holiday Inn on Scottsdale Drive. They were witnesses for the defence during sentencing submissions. McArthur pleaded guilty to discreditable conduct for the assault in September.

Green is a 39-year veteran of the Guelph Police Service and his current duties include supervising front line officers and the tactical unit, among others. In 2001 he was McArthur’s first staff sergeant and directly supervised McArther on a number of occasions.

Green said he had a good working relationship with McArthur, who he called a good officer and someone he considered to be a friend.

“We didn't socialize outside of the job or anything but we always had a pleasant relationship and continue to do so,” said Green. “I would say we are friends, absolutely.”

Green said McArthur had a strong work ethic and was a hard worker, adding that the officer was someone he could count on. He said McArthur never had an issue with excessive force while under his supervision.

Green said he sometimes asked McArthur to intercede in some situations because of his imposing size. He recalled having an issue with an inmate in the holding cell and calling McArthur to assist.

“He is a presence, he is a big man. His presence can de-escalate a situation. I never had an issue with him and use of force,” said Green. “If there was ever anything physical it was justified.”

A few months after McArthur became part of his platoon, Green moved on to a new role in the service, but in 2008 or 2009 he was once again supervising the officer in the communications area. At that time McArthur was assigned to the unit as a resource officer working the phones.

Asked by defence attorney Joseph Markson if he believed McArthur could return to work at the Guelph Police Service on a return-to-work plan, Green said yes, but it would involve him going back to work slowly in phases.

Green said he is not sure that McArthur could ever return to front line policing, but said there are many duties within the service that he would be suitable for.

“If he doesn't there are things he can do to contribute in a positive way,” said Green.

In cross-examination Green was asked by prosecutor David Migicovsky the reason McArthur was reassigned to communications.

Green said it was because McArthur had been put on administrative duties in relation to an investigation of a 2008 assault.

Migicovsky noted there probably isn’t a single officer in the Guelph Police Service who has twice been found guilty of assault against a member of the public and asked if Green was aware of the outcry in the community as a result of McArthur’s actions.

“I know there has been a great deal of negative media exposure,” said Green.

He told the hearing that he stands by his statement that McArthur could return to work.

“It’s clear Corey overreacted, but there is more to the story than what was reported to the press,” said Green.

Welsh was the second supervisor called by defence to testify on Wednesday. She is a 32-year veteran of Guelph Police Service who is currently overseeing the uniformed patrol division.

Between Sept. 2013 and Oct. 2016 Welsh, who was at that time a staff sergeant, oversaw the D Platoon, which included McArthur.

Welsh said McArthur had exceeding standards in terms of his work ethic and would go out of his way to be a mentor for new officers.

She said McArthur had exceedingly good communication skills and was skilled at speaking with victims of human trafficking. Welsh said he was mild mannered and a good listener.

Welsh said she believes McArthur could return to work after his approximately four-year suspension, but noted that it had to be a gradual process.

“Its been a long time, there has been a lot of changes in that time,” she said.

Welsh said she has seen many officers go on leave and that most aren’t able to do the work to get healthy and come back to work.

In contrast, said Welsh, McArthur has put in the work over the past four years to take responsibility for his actions and seek out treatment.

McArthur was affected by the 2013 death of Const. Jennifer Kovach, who died as a result of a collision on her way to an assist call put out by the officer, said Welsh.

She said the event was tragic for all officers but more so for McArthur because of his close relationship with Kovach, which she described as being like a "big-brother."

During cross-examination, Welsh agreed with Migicovsky’s assessment that the community might be very concerned about an officer returning to work after being found guilty on two occasions of assaulting a member of the public.

She also said she was embarrassed that a fellow police officer has twice been found guilty of assaulting a member of the public.

Markson asked Welsh if her embarrassment regarding the assaults changes her opinion that McArthur could return to work. She said no and reaffirmed that McArthur has put a lot of work in to return to the department.

“I think he could return and be a positive member of the service,” she said.

Earlier in the day Markson re-examined Dr. Jonathan Rootenberg and asked if any of the inconsistencies brought up during Tuesday’s cross examination alter his opinion that McArthur could return to work. Rootenberg said it did not.

Markson also asked Rootenberg if he was able to find a note from a March 12, 2018, assessment that was said to have been missing during Tuesday’s testimony.

Rootenberg’s report from that assessment said that McArthur regrets his actions of the Sept. 19, 2016 assault, but on Tuesday he was unable to produce his notes to reflect that.

On Wednesday Rootenberg said he went through the three folders in his file but was not able to find it.

“I looked through every piece of paper,” said Rootenberg.”

Markson then asked Rootenberg directly if McArthur actually spoke those words during the assessment.

“Absolutely, I would not have written that if he didn’t” he said.

The hearing will continue on a date to be determined.